Thursday is your first chance to get in on some Week 12 fantasy football action. Here are our top Underdog Pick'em plays for Thanksgiving football.

Fantasy football is more than just the weekly head-to-head game we’ve all grown to love. On Underdog Fantasy, managers can put their player-projection skills to the test by predicting player stats. Here are my top Underdog Pick ’em plays for the New York Giants vs. Dallas Cowboys Thanksgiving Football Pick ’em contest.

Underdog Pick’ems allows fantasy managers to predict stats and fantasy-point totals for almost all fantasy-relevant players. You can make two picks that pay out 3x your entry fee or add more selections to your entry for higher payouts.

The levels are 3x, 6x, 10x, and 20x, progressing with each additional pick ’em you add to your entry. Let’s take a look at this week’s Underdog Pick’ems.

Touchdowns have a high degree of variance — even more so when a player isn’t a goal-line running back. Tony Pollard is not the Cowboys’ goal-line back. And this prop is specifically rushing touchdowns.

Pollard scored twice last week, both times on splash plays through the air. While he did rush for a total of four touchdowns in his two previous games, both of those were without Ezekiel Elliott in the lineup.

Last week, with Zeke back, Pollard was pulled at the goal line, and Elliott punched in two short touchdowns. Yes, we all know Pollard is vastly more talented than Zeke. However, Zeke isn’t useless. He is still a better short-yardage and goal-line back and likely will continue in that role.

It’s always possible Pollard busts off a long touchdown run — that’s kind of his thing. But unless he does, his odds of scoring are below 50%.

I debated going with Dalton Schultz’s receiving yards but settled on his receptions as I think it’s more likely he has a 4-30 type game than a 3-40 one.

Schultz only caught three passes last week against the Vikings. Dak Prescott also attempted just 25 passes in the blowout of the season.

While the Cowboys are heavy favorites against the Giants, let’s be realistic — they’re not going to win by five scores again. Even if they comfortably beat the Giants, Prescott should have to be a little more active through the air.

Note: By the time I entered the slip on Underdog, this prop moved to 4.0. I still like the higher.

Over the past two weeks, Lawrence Cager’s role in the Giants’ offense has steadily increased. He played 74% of the snaps last week and ran 28 routes. Cager sure looks like the WR2 behind Darius Slayton.

16.5 receiving yards seems awfully low for a guy running as many routes as Cager. Now, the Giants are without Wan’Dale Robinson. They’ve already tried the Richie James experiment. That didn’t work. And it sure isn’t going to be Kenny Golladay.

70% of the receiving yards allowed by the Cowboys go to wide receivers. Cager only needs one or two receptions to surpass this number. This very well could be a case of pinpointing an increase in a receiver’s role before the projections adjust. 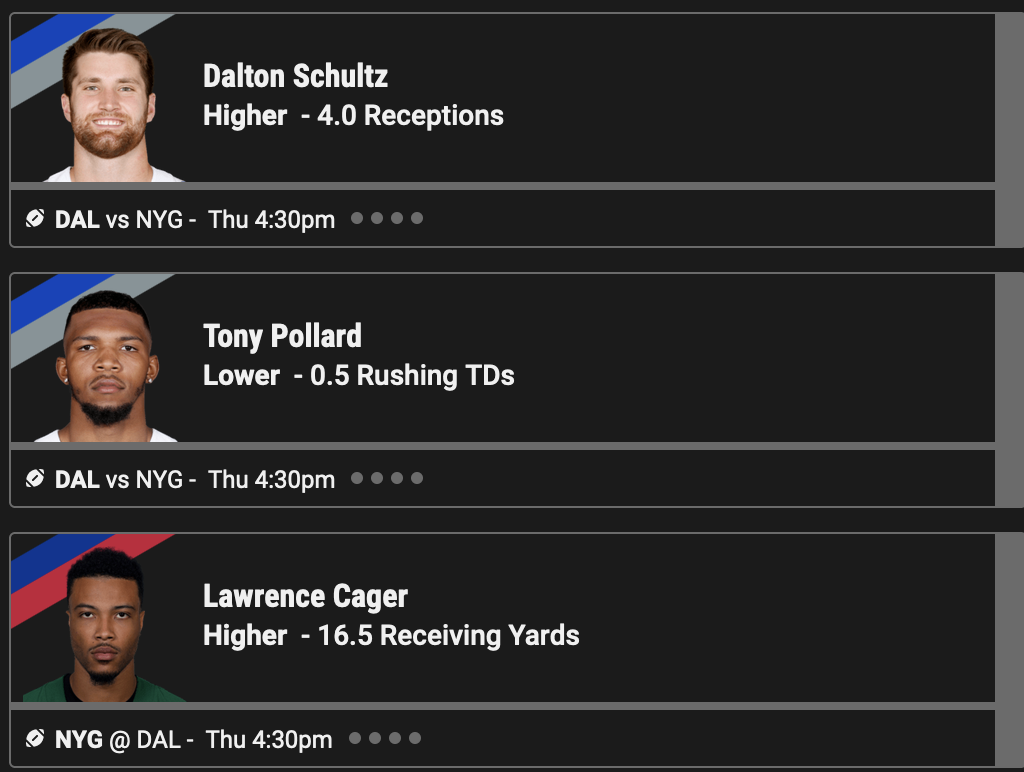 Nico Collins Waiver Wire Week 14: Will He Continue To Find Success Against Dallas This Week?

Is DJ Chark or Jameson Williams a Waiver Wire Add in Week 14?

Jordan Mason Waiver Wire Week 14: Should You Add Him Against the Buccaneers?

Corey Davis Waiver Wire Week 14: Can Davis and the Jets Passing Game Continue To Find Success This Week vs. Buffalo?