The NFL Week 3 Team of the Week is dominated by top defensive performances, including a star-studded defensive line. Who made the cut?

The NFL Team of the Week is an outstanding reminder of the strength of some of the top teams. It also reminds us that others are who we thought they were. Here’s a look at the Team of the Week for Week 3 in the NFL.

NFL Team of the Week for Week 3 | Offense 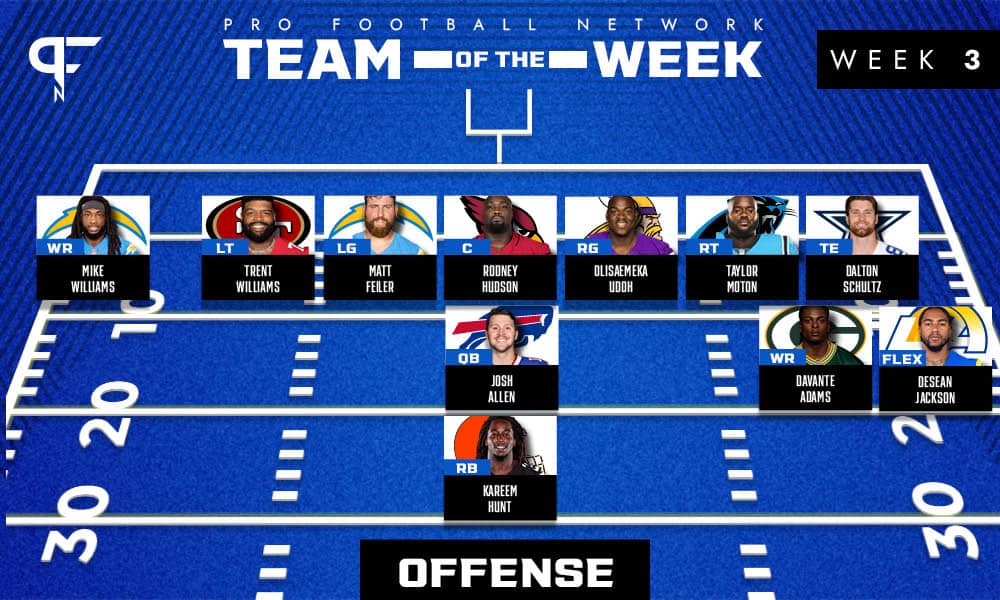 Josh Allen simply lit up the field against Washington on Sunday. He dotted the Sunday 1 PM ET slate with a bevy of perfectly-placed balls all over the WFT defense. For the day, he completed 32-of-43 passes for 358 yards and 4 touchdowns.

Allen chipped in with a rushing score as well in a dominant outing. He connected on 4 touchdown passes of 5, 7, 14, and 28 yards to three different receivers. Before Sunday’s outing, Washington’s defense had allowed just 2 passing touchdowns through two weeks of action.

Kareem Hunt single-handedly outgained Cleveland’s opponent in Week 3. He accumulated 74 receiving yards on 6 receptions and another 81 rushing yards on just 10 carries. His 155 total yards of offense were actually more than TRIPLE the Bears’ output offensively as they gained a total of 47 net yards of offense.

Hunt won all over the field and essentially iced the game with his 29-yard touchdown run to start the fourth quarter.

Talk about winning all over the field — Mike Williams was dominant for the Chargers in Week 3. He lands on our Team of the Week after catching 7 passes for 122 yards and 2 touchdowns. It didn’t matter which defensive back tested him in coverage, Williams just won.

His crucial first-down reception on fourth down in the fourth quarter also set the Chargers up for the game-winning score — a score which he grabbed from 4 yards out for the victory over Kansas City.

What more can you say about possibly the league’s top all-around receiver that hasn’t already been said? Davante Adams gave a complete performance in Green Bay’s come-from-behind victory, including a clutch 17-yard reception in the waning moments to set up the game-winning field goal.

Adams finished the game with 12 receptions for 132 yards and a touchdown. His balance, athleticism, catch-point skills, speed, and route-running truly make him one of the best to ever do it.

Originally given to Minnesota’s Tyler Conklin, Dalton Schultz treated viewers to the best tight end performance of the week on Monday night. Hauling in 6 receptions for 80 yards and 2 scores, Schultz was a man on a mission against Philadelphia.

His pair of touchdowns included one where he split zone coverage and another where he showed skills we hadn’t previously seen. Schultz gave the Eagles a shimmy and a shake on his second touchdown, showing lateral agility for what felt like the first time in his career. It was a great performance.

The ultimate FLEX, DeSean Jackson was back to his old ways on Sunday afternoon for the Rams. Hauling in 120 receiving yards on just 3 receptions, Jackson averaged a whopping 40 yards per catch.

He scored a dramatic 75-yard touchdown reception and actually could have scored another had a deep pass landed with a touch more accuracy. Proving he’s still got it at age 34, Jackson is yet another weapon for Matthew Stafford to target in LA.

Look no further than Trey Lance’s touchdown run in the second quarter to see Trent Williams’ dominance for San Francisco. He easily lands on our Team of the Week after a commanding performance on the ground and in the passing game.

No second- or third-level defender wants to see Williams in space and — for what feels like the better part of two decades — no first-level defender does either.

Matt Feiler could routinely be spotted downfield blocking for the Chargers’ rushing attack against Kansas City. He also kept Justin Herbert clean in the passing game.

Combine that with the fact that he had Chris Jones lined up on or near him for the entire game, and you’ve got yourself a dominant performance. Feiler is more than worthy of a Team of the Week selection.

The Raiders may be 3-0 but they also may be kicking themselves for letting go of Rodney Hudson this past offseason. The future Hall of Famer put in another vintage performance in Week 3.

Proving his worth in the run game, Hudson kept Kyler Murray clean from interior pressure all game long. His barking out protections and calls at the line of scrimmage is just what this Cardinals team needed.

It’s time to learn his name: Oli Udoh. The Vikings’ line crushed the Seahawks’ defensive front on the ground, and Udoh was leading the charge. The majority of big runs certainly came from Udoh’s side of the interior, as Minnesota rushers were hardly touched within 5 yards of the line of scrimmage when running to the right.

On Thursday night, Taylor Moton put on a run-blocking clinic against the Texans. Solid in pass protection as well, Moton was dominant on the ground. Moving freely, he was sealing the edge just as easily as jumping to second-level defenders to spring big runs.