Week 1 of the 2021 NFL season brought dozens of top incredible performances, but which individuals found their way to our Team of the Week?

The 2021 NFL season kicked off with a historic opening slate of games from Thursday through Monday. Now that the week has come to an end, we take a stab at nailing the top performances in our Week 1 Team of the Week.

The PFN NFL Team of the Week will set aside preconceived notions and all fanhood. The Team of the Week nominates players based on individual performance and value towards their team’s success or limiting the opponent’s. We’re not here to discuss team wins or losses. Rather, we’re here to shed light on the top individual performances from the week.

We begin with the offense in our NFL Team of the Week for Week 1. 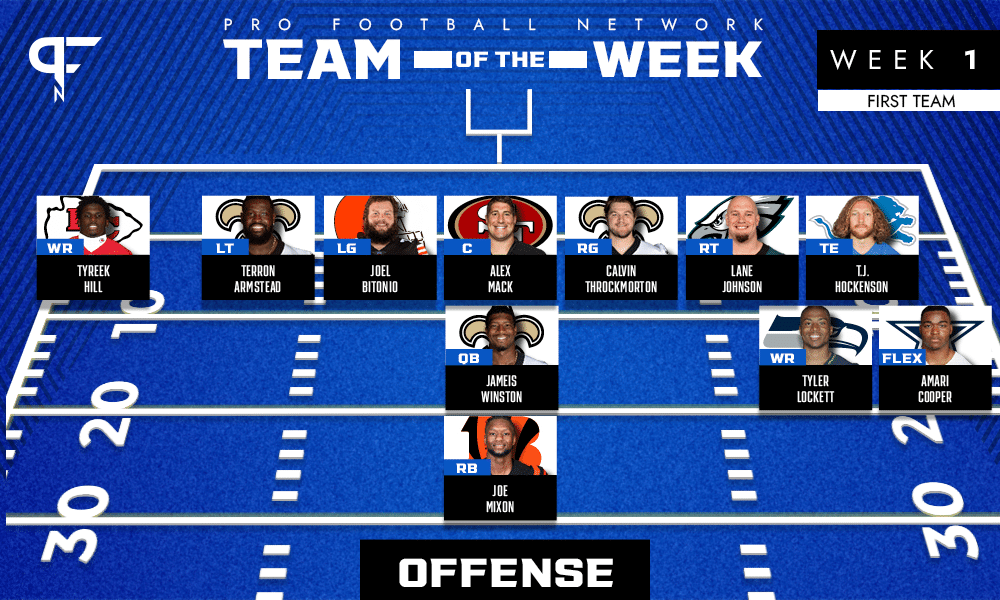 There were gaudier statistical performances than Winston’s in Week 1. Just about every other quarterback threw more yards. Nevertheless, Winston led the league’s quarterbacks in touchdown passes in Week 1.

Winston finished a beautifully orchestrated offensive attack by completing 14 of 20 passes for 148 yards and 5 touchdowns. Sure, he didn’t test the deep waters too much, but that doesn’t mean he stayed in the kiddie pool the entire time, either. According to Next Gen Stats, Winston finished the game 5-of-7 for 90 yards and 3 touchdowns on throws targeted 10+ yards downfield.

He chose where and when to take his shots and avoided mistakes, unlike his counterpart Aaron Rodgers. Perhaps it’s fate that Winston’s first start for the Saints saw him defeat the Green Bay Packers, just like in 2006 when Drew Brees made his first start for New Orleans.

Not only did Mixon lead the league’s running backs in yards on the ground, but he also did it behind arguably one of the worst-performing offensive lines of the week. Mixon manufactured his way to 127 yards on 29 carries and a touchdown. Grinding his way through the Vikings’ defense, Mixon rarely went down on first contact and added another 23 yards through the air in the victory.

If it weren’t for Hill, the Browns might have been able to win their first road opener in nearly three decades. Instead, the speedster recorded 197 receiving yards and a touchdown on 11 catches that brought the Chiefs back in the fourth quarter. After falling behind by two possessions, Hill’s 75-yard score with just over 10 minutes remaining gave Kansas City new life.

Hill’s constant presence at the intermediate level of the field allowed Patrick Mahomes and Travis Kelce room on the ensuing game-winning drive.

Lockett finished with 100 receiving yards and 2 touchdowns, but it was how he recorded those scores that landed him on our Team of the Week. At the top of his route break, he lost his defender on his second touchdown, scoring on a 69-yard reception that gave the Seahawks the go-ahead score. But his first party in the end zone was even more impressive.

Tracking his first touchdown on a deep post route, Lockett had to re-adjust while fighting off coverage and find the football off his opposite shoulder to make a spectacular grab. That catch was easily the best of the weekend.

The Lions were dead in the water until Hockenson came alive. Sure, he grabbed his only touchdown early in the first half. But it was his effort working over the middle of the field that saw the Lions eat up a 24-point deficit with under two minutes to play. Chipping in with multiple first-down receptions, Hockenson’s two-point conversion reception gave the Lions life late.

It feels like a lifetime ago, but Cooper was on another planet on Thursday night against Tampa Bay. Targeted 16 times, Cooper hauled in 13 receptions for 139 yards and 2 touchdowns against the defending Super Bowl champions. He’s among the best route runners in the NFL, and 2021 should shape up to be quite the season for the seven-year pro.

Armstead was dominant in all facets for the Saints in Week 1. Earning his place on our Team of the Week, he kept Winston’s blindside clean from pressure essentially all afternoon. On average, edge defenders were more than 4.0 yards away from Winston at the time of the throw, per Next Gen Stats.

It was a losing effort, but Bitonio had no fault in that. Paving the way with impressive reach blocks and second-level dominance, Bitonio was a force on the ground for Cleveland in Week 1. Nick Chubb himself rushed for 69 yards to the left side, including both scores.

This is certainly the reason why San Francisco acquired the perennial All-Pro this offseason. Mauling defenders in the passing game to keep Jimmy Garoppolo clean from pressure is one thing. Proving to be a dominant force on the ground is another. Mack remains one of the best and easily earns Team of the Week honors.

Dominant is the only word to describe the Saints’ offensive line as all five starters could have easily found their way to our Team of the Week. Tasked with All-Pro Kenny Clark on the interior, Throckmorton proved more than capable of holding his own after coming in for an injured Erik McCoy. Throckmorton helped pave the way for 84 yards on 19 carries to the right side of the ball against Green Bay.

The Eagles were having none of the offseason talk of them being the worst team in football. They easily took care of the Atlanta Falcons, and Johnson was among the most impressive players on the field. Not only was he solid in pass protection, but Johnson was equally impressive on the ground. Moving well at both levels, he created holes for Miles Sanders and Kenneth Gainwell to rush for 9.6 yards per carry to his side.

Who are the ESPN NFL halftime commentators?