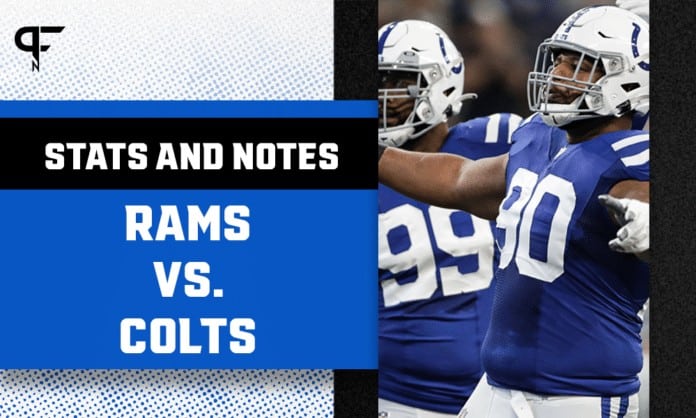 NFL Stats and Notes: Rams vs. Colts is an intriguing matchup on both offense and defense

When the Rams and Colts kick off at 1 PM ET, there will be plenty of intriguing NFL stats, notes, and storylines to be aware of.

By Matthew Cannata
September 19, 2021
What's in this article? Click to show
Can DeForest Buckner and the Colts’ defense challenge Matthew Stafford?
Interesting NFL Stat: Sean McVay is undefeated in road (and home) openers
Aaron Donald and the Rams’ defense looking to build upon their 2020 stats as the NFL’s No. 1 defensive unit
Jonathan Taylor is RB1 for the Colts, and the stats prove it

The Los Angeles Rams will travel east to take on the Indianapolis Colts with a 1 PM ET kickoff time, and there will be plenty of NFL stats, notes, and storylines to be aware of. When looking beyond the surface level for both teams, there is a lot to take notice of on both offense and defense. This week in NFL Stats and Notes, we take a look at who has the edge (if anyone) when these two teams kick off on Sunday afternoon.

Can DeForest Buckner and the Colts’ defense challenge Matthew Stafford?

In Week 1 against the Chicago Bears, quarterback Matthew Stafford completed 20-of-26 passes for 321 yards and 3 touchdowns, averaging 12.3 yards per attempt. Sounds great, something like a franchise quarterback should do, right? Maybe not.

Did you know that according to NFL stat records, no player had ever won his debut while passing for 300+ yards, 3 touchdowns, and 0 interceptions … until last week? It’s safe to say that the McVay-Stafford era got off to a resounding start. Can they make it a pattern by doing it in two consecutive games?

The Colts’ defense will have something to say about that. In 2020, they were tied for seventh in the NFL in interceptions with 15. Additionally, the Colts led the NFL with 4 INTs returned for touchdowns. That tied for the most in a single season in team history and was only the eighth time the team had accomplished the feat.

When you scan your eyes from the secondary to the defensive line, you’ll find the likes of Kwity Paye, DeForest Buckner, and Grover Stewart. A rookie drafted 21st overall, Paye registered 3 tackles (1 for a loss) and 1 fumble recovery in his Week 1 debut against the Seahawks.

That’s pretty remarkable considering that, since at least 1999 and according to the NFL stats and notes provided by the Colts for Week 2, he became just the sixth NFL player to compile that minimum stat line of 3 tackles (1 for a loss) and 1 fumble recovery in their first career game.

If the Colts’ defensive line can get pressure on Stafford –- remember that Buckner finished with the second-most sacks with 9.5 among defensive tackles in 2020 -– it could be a long day for Stafford and Los Angeles’ offense.

But the Rams might have a way to counter, especially if they see the Colts’ defense gasping for air — going to a no-huddle offense. The Rams’ offense has been one of the best in the NFL since 2017, scoring 177 offensive points. This ranks second in the league through the 2020 season, with only the Arizona Cardinals scoring more (207).

When the Rams take on the Colts, they’ll look to remain undefeated under head coach Sean McVay in road openers and begin the 2021 campaign with a 2-0 record. As head coach in road openers, McVay currently sits at 4-0 and is 5-0 in home openers.

McVay burst onto the scene when he was named the head coach of the Rams before the start of the 2017 season. Since that time, the Rams have won six regular-season games by at least 29 points. In fact, the Rams are one of just three franchises to record at least six wins of more than 29 points since that time.

But it’s not just his offensive unit that makes noise in road openers. His defense has picked off the opposing quarterbacks at least once for the past four years for a total of 7 interceptions. If they can intercept Colts QB Carson Wentz, that will mark five consecutive years where the Rams’ defense has an interception in McVay’s road opener.

If the Rams can do that and go into halftime with the lead, it’s a pretty good bet they’re going to walk away with the victory. Since 2017, the Rams have remained undefeated when having the lead going into halftime, including the playoffs. McVay’s record when this happens? 38-0, which ties him for first when looking at NFL stats from 2017-2021.

Aaron Donald and the Rams’ defense looking to build upon their 2020 stats as the NFL’s No. 1 defensive unit

Against the Bears in Week 1, the Rams allowed 322 total net yards, including 134 yards rushing and 188 yards passing. The most important stat, though? They only allowed 14 points to Andy Dalton, a little bit of Justin Fields, and the rest of Chicago’s offense.

In 2020, the Rams were the best defensive unit in the NFL, conceding a league-low 16.8 points per game by opposing offenses. Over a 16-game season, they only allowed 261 total offensive points. And as a team, they allowed the lowest point total per game (18.5), which included touchdowns forfeited by the offense and special teams units.

Against the Colts, they’re looking to continue their momentum from 2020 and Week 1, and they’ll aim to do it right out of the gate. In the first quarter, the Rams allowed only 66 points during the 2020 season. Most interesting is that the Rams had an eight-game regular-season streak where the team did not allow more than three points in the first quarter of the game. This trend continued in Week 1, where a red-zone interception on the Bears’ first drive helped keep them scoreless.

But it’s not just the first quarter. In the second half of games, the Rams have held opposing offenses to only 93 points during the 2020 regular season. According to the NFL stats and notes provided by the Rams Media Relations Department, this was the second-fewest opponent offensive points allowed in 2020.

It’s also worth noting that the Rams conceded a second-half touchdown to the Bears in Week 1. It’s no wonder, as noted above, that when the Rams head into halftime with the lead, they are 38-0 under McVay.

Jonathan Taylor is RB1 for the Colts, and the stats prove it

There was not much doubt heading into his season, but Week 1 confirmed that Jonathan Taylor is the clear RB1 for the Colts. Against the Seahawks, he compiled 116 yards from scrimmage, the seventh-most among running backs throughout the NFL. Making up those 116 yards were 56 on the ground and 60 in the air.

Speaking of receptions out of the backfield, he and RB Nyheim Hines (6 receptions for 48 yards) finished as the team’s top two receivers. Taylor and Hines rank in the top 10 in receptions and receiving yards among running backs when looking at NFL stats throughout the league.

Should that be celebrated, though? With a wide receiver group consisting of Michael Pittman Jr., Zach Pascal, and Parris Campbell, one would expect those three to lead the team. With that not being the case in Week 1, this is something to monitor for the Colts moving forward, especially in Week 2 vs. the Rams.