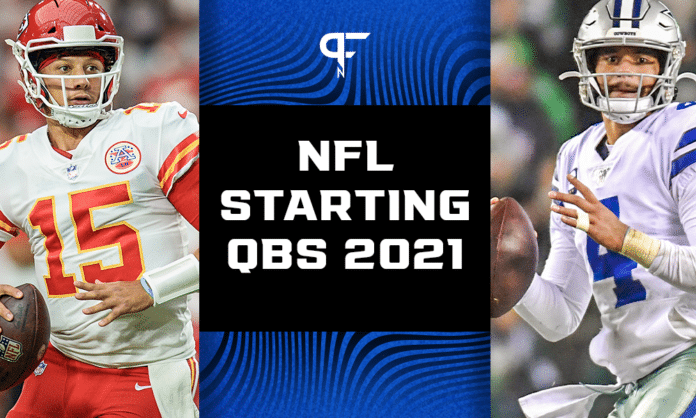 Who are the 32 NFL starting quarterbacks, and which teams are still looking for their QB in 2021 (or further into the future)?

Ahead of the 2021 NFL season, who are the starting quarterbacks for all 32 teams? Now that we are in Week 3, have there been many changes? Let’s take a look at the full list and which NFL teams may still need a starting QB.

Teams that need a starter at QB

The majority of situations for the 2021 season are now settled. The biggest question mark arguably lies with San Francisco and Washington. San Francisco is likely to lean on Jimmy Garoppolo early with Trey Lance waiting in the wings. Washington tentatively had Ryan Fitzpatrick in place as their starter, but Taylor Heinicke is now in charge after Fitzpatrick’s injury.

Thinking more long-term, several NFL starting quarterback situations are still up in the air. Aaron Rodgers is supposedly out of Green Bay next year, so they could still be searching for their QB of the future.

There are also some unsettled situations with young QBs. The Browns have yet to lock up Baker Mayfield with a contract extension, while Sam Darnold is on a two-season trial in Carolina. In terms of veterans, Jameis Winston is on a short-term deal in New Orleans, and the Vikings are apparently looking to move on from Kirk Cousins when they can.