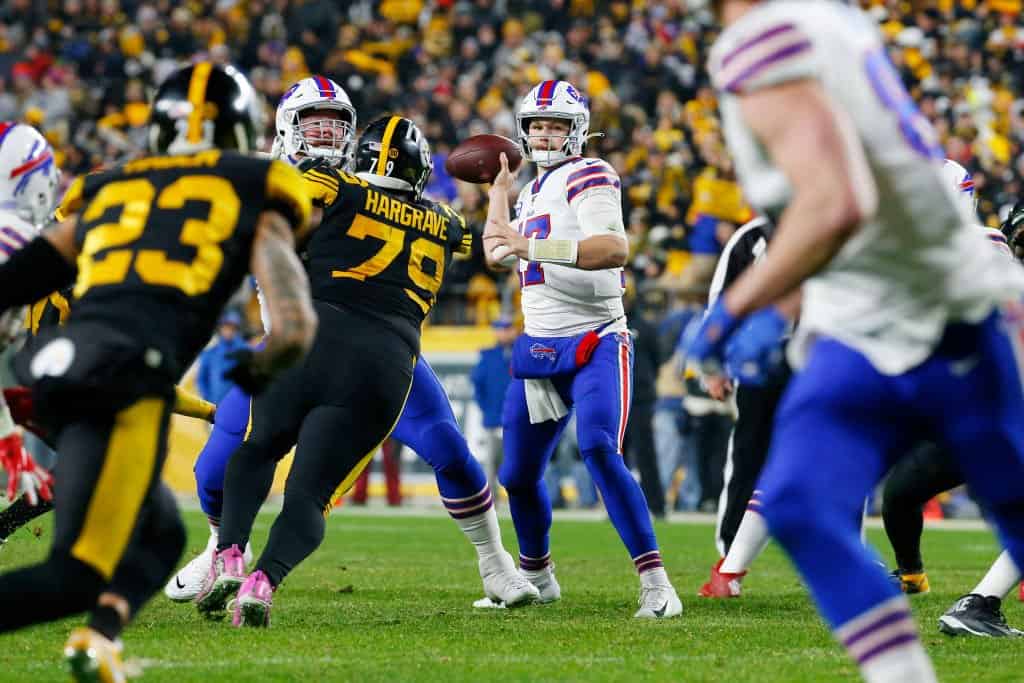 PITTSBURGH, PENNSYLVANIA - DECEMBER 15: Josh Allen #17 of the Buffalo Bills throws a pass during the second half against the Pittsburgh Steelers in the game at Heinz Field on December 15, 2019 in Pittsburgh, Pennsylvania. (Photo by Justin K. Aller/Getty Images)
What's in this article? Click to show
NFL Week 14 featured games
Week 14’s crucial playoff head to heads
Full NFL Week 14 Schedule

A turbulent Week 13 is behind us, and we can look forward to things getting back to relative normality with Week 14 of the 2020 NFL schedule. Week 14 contains a number of intriguing games on the schedule, which will have significant implications both for the 2020 NFL playoff race and the 2021 NFL Draft.

Following the Pittsburgh Steelers’ loss on Monday, this game on the NFL Week 14 schedule takes on particular importance. A Week 14 victory will put the Bills just one game behind the Steelers in terms of playoff seedings. They would still need a major stumble from the Chiefs down the stretch to claim the top seed, but beating the Steelers out for the second seed would assure the Bills of a home-field game in the second round.

The Steelers will be desperate to bounce back as they now have no cushion over the Chiefs. This game will have huge playoff implications and could be a crucial head-to-head tiebreaker if these two teams end up on the same record in a few weeks’ time.

When the first meeting between these two teams was over back in Week 1, things looked completely different from how they do now. The Ravens prevailed 38-6 in a scoreline that suggested the Ravens were set for another incredible year, while the Browns looked doomed to disappoint all over again.

However, the NFL standings tell a very different story entering Week 14. Since then, the Browns have gone 9-2 and currently hold the fifth seed in the AFC. As for the Ravens, they were cruising along at 5-1 but have lost four of their next five to enter Week 14 at 6-5. This matchup will shape the AFC wild-card race. Victory for the Ravens keeps them well and truly alive while dragging the Browns back into the mix. A win for the Browns all but locks in their playoff spot. However, perhaps just as importantly, it also deals a huge blow to their big rivals.

Entering Week 14, both the Vikings and Buccaneers sit in one of the seven NFC playoff spots. However, this game has a lot riding on it, with a further five teams at 5-7 or 6-6. The winner of this game will have the comfort of knowing they had a head-to-head tiebreaker over one of their possible rivals for a 2020 playoff spot.

While there are still a lot of permutations in the final four weeks of the NFC, this single matchup could have lasting effects. If the Buccaneers get to 8-5, they have a superb of going to the playoffs. However, 7-6 would leave them in a potentially very dangerous position if they stumble again down the stretch. As for the Vikings, dropping to 6-7 could see them slide outside the playoffs spots and put them on the back foot all over again.

The Colts currently sit as the seventh seed in the AFC standings, while the Raiders are eighth. A win for the Raiders in this game would see the two teams flip spots. A loss for the Colts could also see them slip a game back on the Titans for the AFC South.

With three teams at 8-4, two at 9-3, two teams at 7-5, and the Patriots at 6-6, there will be a number of permutations. Head-to-head record and record within the conference could be the difference between a playoff spot or not when January rolls around.