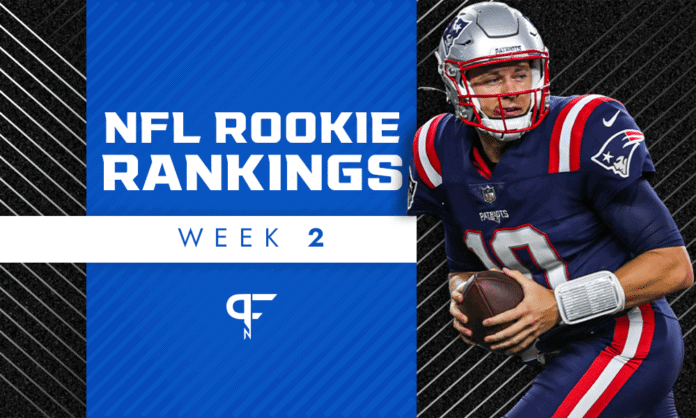 The initial NFL rookie rankings are here! Which players from the 2021 NFL Draft class make the list of top NFL rookies in their first games?

The NFL rookie rankings are a good way to see which teams are receiving an immediate return on their investments from April. Throughout the season, the list of the top NFL rookies will be fluid. It’ll also be cumulative and not a week-by-week analysis. By the end of the season, we’ll know exactly which rookies had the best seasons. For now, we go off quick flashes from Week 1. Let’s dig in.

Many NFL rookies made a difference in their first outings over the weekend, but which 25 end up making the list of the top NFL rookies?

Slater’s draft stock, or at least the perception surrounding it, skyrocketed in some part due to his matchup against Chase Young while playing for Northwestern. Now, the accounts of what happened that day are slightly exaggerated, but he was one of the only humans to hold their own against Young in college.

Fast forward to Week 1 of the NFL season, and guess who he has to face? Not only is it Young, but Montez Sweat as well. A duo that claims they want to set the sack record for teammates. Well, they won’t get anywhere close if they face a league full of Rashawn Slaters.

As a pass protector, he was as close to perfect as it gets. And as an offensive tackle, that’s what pays.

Speaking of difficult situations, Sewell worked during the offseason and during camp on the right side. And man, he struggled there at times. However, Lions starting left tackle Taylor Decker had to take a stroll to the short-term IR just three days ago.

Fast forward to Sunday, and Sewell is on the left side, with minimal reps since his draft prep, against Nick Bosa. And he excelled. It’s no wonder he landed so high on the NFL rookie rankings.

On 71 pass-blocking snaps — I repeat, SEVENTY ONE pass-blocking snaps –, he allowed only 6 pressures and 2 hits. Bosa lined up on Sewell’s side 40 times, so it’s not like the game plan kept him away from the rookie tackle. Hopefully, the Lions are smart and keep him on the left side, even as Decker returns from injury.

An interception against the reigning league MVP in your first ever outing? That’s a good way to make it close to the top of the NFL rookie rankings. The entire Saints’ defense dominated Green Bay, and Adebo was no exception.

He allowed just 1 catch on the night, and his passer rating against was 2.1. Adebo was always going to be a high-risk, high-reward cornerback early in his career, so as long as he was close to the same player he finished as at Stanford. However, that was in 2019. As we saw in Week 1, it appears the 2020 college opt-outs came straight to the NFL ready to rock.

Newsome played 63 snaps against Patrick Mahomes and the Kansas City Chiefs, and we only really ever heard his name once. For a cornerback, like an offensive lineman, that’s usually a good thing.

Simply not getting embarrassed by the most explosive receiver in the NFL is enough to earn a spot on the NFL rookie rankings. Newsome always had the tools to be the best cornerback in a great cornerback class. If he stays healthy, the Browns may have gotten one of the best values in the draft.

So much for all that talk about not being able to catch an NFL football. Chase caught 5 passes against the Minnesota Vikings, including a deep touchdown against Patrick Peterson. Listen, Peterson played it poorly, and all Chase did was run straight, but he made the dang play!

What really impressed me during the game was how obvious it was that he and Tee Higgins are the guys there — and will be for a long time. The other impressive part of Chase’s game was his feel for soft spots against zone coverage. He was the best of the highly-touted rookie receivers.

Speaking of 2020 opt-outs, all rookies in the top six of the NFL rankings passed on playing college football last season. Parsons has been one of the darlings of camp and throughout the preseason.

He got picked on a few times in zone coverage, but that could be because he was playing a quarterback who’s played in the NFL for nearly as long as he’s been alive. Parson’s pass-rush prowess is incredible for a young defender. But he’s also an exceptional off-ball linebacker. That makes him a complete defensive weapon, as long as he can improve in coverage.

He’ll have every opportunity to stay on and rise on this list. He’s already Dallas’ best linebacker and could end up battling DeMarcus Lawrence as their best defensive player by the start of 2022.

Waddle moves at a different speed than anyone else on the field. There is zero doubt in my mind he can eventually have a similar impact to Tyreek Hill. Ask Jalen Mills, who was booking it while trying to stay in the same zip code as Waddle on a slot fade.

However, he couldn’t place higher on the NFL rookie rankings. Unfortunately, he dropped an out route with nobody near him, and the Miami Dolphins passing attack didn’t ask much of him outside of simply running to the flat as the complement to a slant.

With Will Fuller returning to action next week, it’ll be interesting to see if they open up the playbook and where Waddle will fall on the target distribution chart.

It won’t be long before Jones is getting the “system QB” moniker as a way to downplay his success. Jones ran the offense well in Week 1 and ended up as the only rookie QB to rank in the top 10 NFL rookies.

Jones didn’t push the ball downfield much in his first NFL game, but he did navigate an aggressive Brian Flores defense with great poise, outside of an incredibly funny backward toss while heading to the ground.

His completion percentage over expectation is evidence of his efficiency. The Patriots need not to fumble 4 times, and they most likely beat Miami.

DeVonta Smith, like Chase, did a bang-up job against soft NFL zone coverages. He was the least impressive of the receivers drafted in the top 10, but he still played well for the Eagles, landing him in the initial NFL rookie rankings.

Smith was the recipient of a rub route that ended in an uncontested touchdown. However, the offense overall didn’t do much from a downfield perspective. On average, nobody recorded fewer air yards than Jalen Hurts in Week 1.

Still, Smith nearly doubled Hurts’s aDOT, which could mean that’s who he has the most confidence in.

Moore might be the 2021 version of Deebo Samuel. By that, I mean he’s going to catch passes around the line of scrimmage and wow us with his post-catch ability. Of his 68 receiving yards, 57 of them came after the catch.

His vision, contact balance, shiftiness, and explosion were all on full display during his 4 receptions. If his game rounds out, and he becomes a more technically refined receiver, the Cardinals will have a star on their hands.

These players didn’t make the initial top 10 of the NFL rookie rankings, but they could very well end up in there with strong Week 2 performances.