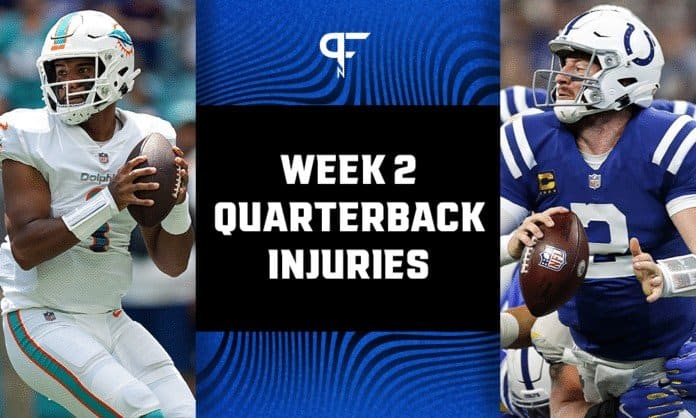 Sunday was a bad day for NFL quarterbacks. Four teams had starting quarterbacks go down with injuries — the Houston Texans, Chicago Bears, Miami Dolphins, and Indianapolis Colts. Here’s the latest on what we know about the availability of Tyrod Taylor, Andy Dalton, Tua Tagovailoa, and Carson Wentz for Week 3.

What is the early pulse on the quarterback injuries from Week 2?

Tua’s rib injury resulted from a direct shot from Buffalo Bills defensive end A.J. Epenesa in Miami’s second series. He did not return to the game, and Brian Flores told reporters that the second-year quarterback was scheduled for more tests to determine the injury’s severity.

NFL Network reported Monday that Tua’s X-rays were negative. Other test results “didn’t reveal any major issues,” so his return to play will depend on pain management and functionality. Dolphins coach Brian Flores said Monday that Tagovailoa is still in a fair amount of pain and is officially listed as day-to-day.

Jacoby Brissett took over after Tua went down, and he got knocked around by the Bills’ defense pretty good, too. Brissett was sacked 4 times and hurried a bunch more, helping explain his stat line (24 of 40 for 169 yards and an interception).

Dolphins players will be off Tuesday before returning Wednesday to begin preparation for the undefeated Las Vegas Raiders.

The Justin Fields era may have begun mid-game Sunday. Dalton left the Bears’ game in the first quarter with a knee injury, got some treatment and tried to return, only to leave for good in the second quarter.

The hope immediately after the game was that Dalton avoided a significant injury. An MRI showed he avoided an ACL tear, Bears coach Matt Nagy told reporters Monday.

If Dalton cannot play Sunday against the Browns, Fields will get the start — and might never give up the job. The first-round pick out of Ohio State completed 6 of 13 passes for 60 yards and an interception in relief Sunday.

But even if Dalton is able to play, he might not. Nagy would not say Monday when asked directly if Dalton would remain the Bears’ starter, citing competitive considerations.

Another week, another medical issue for Wentz, whose preseason flew off the rails with a foot injury and COVID-19. Now he has an ankle injury after rolling it “pretty bad,” in the words of coach Frank Reich. Turns out, Wentz somehow injured both ankles Sunday and Reich was unsure of his availability this week.

When Wentz left the game in the fourth quarter of Sunday’s game against the Los Angeles Rams, the score was tied. But the Rams went ahead with a late field goal and Wentz’s backup, Jacob Eason, did nothing productive in two late-game drives.

Eason will need to be much better if Wentz is unavailable against the Tennessee Titans in Week 3.

The Texans didn’t need any more bad news but got some in the half of their 31-21 loss to the Cleveland Browns when Taylor went down with a hamstring injury.

Rookie Davis Mills took over and looked like, well, a rookie. He completed just 8 of 18 passes and throwing an interception on 35 offensive snaps in his professional debut.

Texans coach David Culley said Taylor is day-to-day with the injury, but NFL Network reported that he will be out “for a while.” If Taylor is indeed out a significant amount of time, expect Mills to get the work, even though Deshaun Watson remains on Houston’s active roster. Mills will have a short turnaround; the Texans play the Carolina Panthers Thursday night. Watson is not an option to play, Culley added.

This is a developing story and we will update this as more information is available.