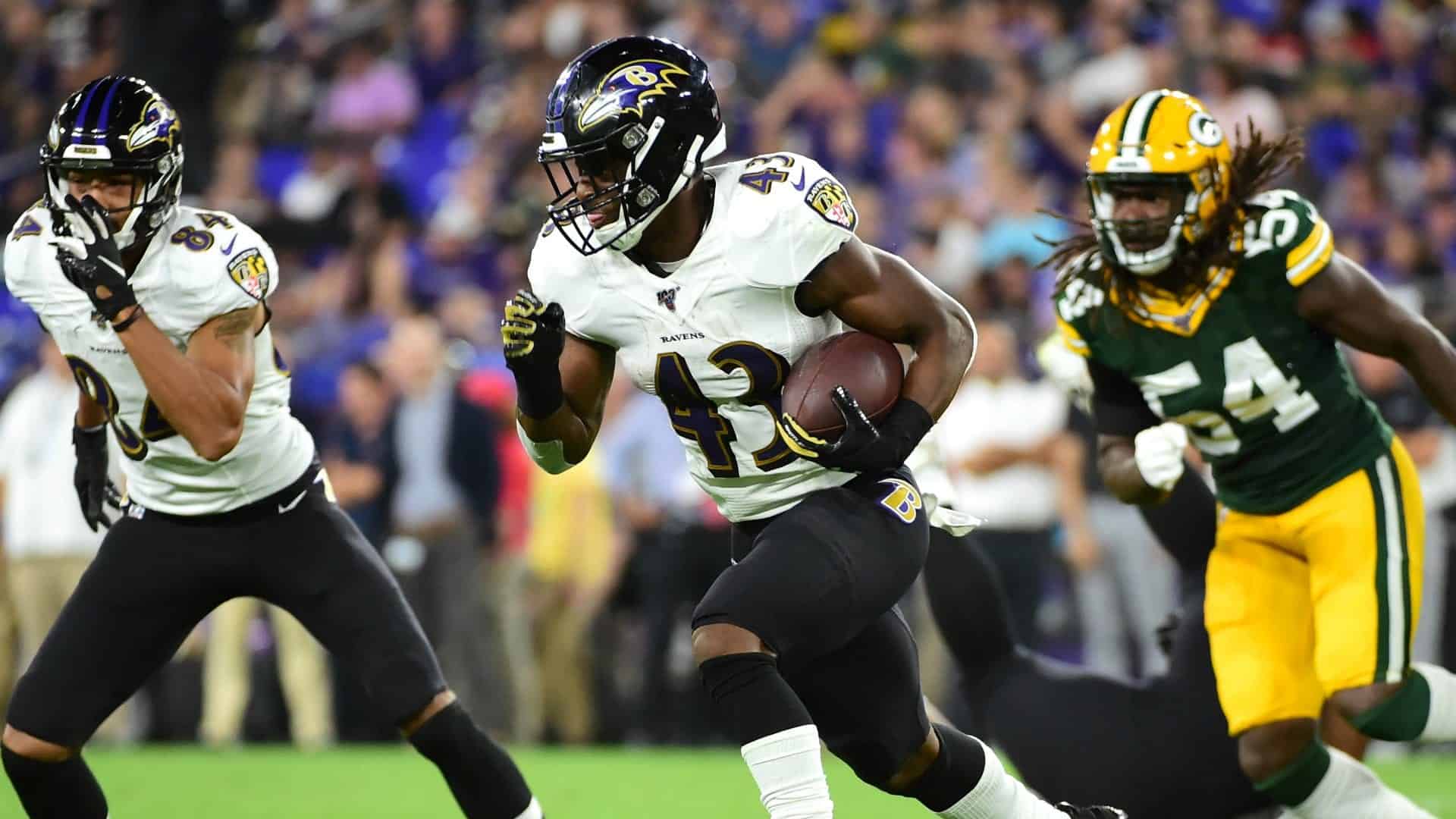 It seems like both fans, and the players can’t get enough of football. So much so that we are now having games on Monday night while other teams are getting ready for week three of their preseason.

Look, we all know the preseason means nothing to most people, but true football fans are excited to see it. While a majority of players know their status on the roster, an undrafted rookie could see their stock rise or a depth player could transform into a starter. Although some people may find the preseason boring, it’s hard not to tune in if your favorite show is still off the air.

Week 2 has passed, and several potential stars made their mark. Let’s take a look back at the top performers of the weekend’s action.

As if the Colts didn’t already have a reliable arsenal, the emergence of Deon Cain just helps out. The sixth-round pick of last year’s draft missed the entire season due to a torn ACL suffered in the preseason. Just over a year removed from playing and no one would be able to tell Cain missed time.

Finally, close it out with a compilation of all Deon Cain targets. He had 9 officially (led the team, Marcus Johnson was 2nd with 6), though he actually had 11 with two called back on penalties. Came in a variety of way, of the 9 8 were catchable, he caught 7 of them. #Colts pic.twitter.com/Lw4hHy6qT8

Pick a rookie, any rookie from New England, and you’d probably be right. For this though, we’re going to go with a player not named Jacobi Meyers. While considered one of the top running back prospects in 2019, Damien Harris fell to third round right into Bill Belichick’s lap.

Guys, can we stop letting this happen, please?

Harris finished Saturday’s outing with 14 carries for 80 yards and averaged 5.7 yards per run. During the first quarter, the Alabama product broke free in the open field to a 20-yard gain that would set up for a New England touchdown. It’s unclear how much he’ll play in a loaded running back, but Harris has earned some praise for his outing against the Tennesse Titans. Good luck stopping the rushing game in New England other teams.

Yes, it’s preseason and players who could be bums in real games look like heroes here. That’s probably not going to be the case with Josh Allen after the Bills’ productive offseason. Sure, he wasn’t perfect, but it’s hard to nit-pick his outing against the Carolina Panthers.

Allen played in two drives and impressed early for the Bills’ offense. He would go 9 of 11 for 102 yards and led the team down the field for two scoring drives. Let’s give credit to Cole Beasley to being a safety net, but Allen is taking all the proper steps in the right direction.

The regular season will provide more context, but if this is the player we’re going to see, Buffalo probably has found their first franchise signal-caller since Jim Kelly.

Going into the season, many have written off the Houston Texans due to their weak offensive line. After failing to add any big-name player in free agency, some believed the team missed on their two early draft picks by over selecting them. But Saturday could be the start of a new era down at NRG Drive.

The Texans’ offensive line allowed just one sack in the second quarter to Joe Webb. Besides that, they looked pretty solid in pass protection. Both Webb and Deshaun Watson had time to throw and culminated game-scoring drives while Tytus Howard and Max Sharpping looked solid at guards while Roderick Johnson excelled a left tackle.

Let’s see how they look this week before saying they’re a solid unit, but good work by Mike Devlin to correct the past mistakes.

No one is probably going to call Cody Thompson a “steal” for the Kansas City Chiefs right now, but he’s been pretty good thus far. The undrafted rookie from Toldeo has seen his fair share of crazy catches and significant gains during his college career and training camp.

Thompson led the Chiefs in receiving with seven catches for 80 yards on 11 targets. Although far from the fastest player on the field, his route running skills and quick cuts made him a consistent open target for Kansas City against the Steelers’ secondary. One more game like this and he’ll be a roster lock.

Ezekiel Elliott was furious over owner Jerry Jones comments following Saturday’s game in Hawaii against the Los Angeles Rams. But in a way, is Jerry Jones somewhat right? Although Elliott is a premier running back in the league, his absence has allowed Tony Pollard to shoot up the depth chart and see significant playing time.

Pollard led the Cowboys with 42 yards one fives and scoring a 15-yard touchdown. While not the biggest back, the former Memphis runner was elusive in the open field, making defenders miss on initial contact and gaining extra yards.

Elliott needs to be there for Dallas to be a serious contender, but pairing the two isn’t a bad idea. Pollard has proven he can be an excellent complement to the All-Pro runner this season.

The Tampa Bay Buccaneers are looking for a lead running back for the start of the season. Ronald Jones and Peyton Barber have looked good in practice, but neither has transferred over to live events. Dare Ogunbowale, on the other hand, has done both in preseason.

#Bucs RB Dare Ogunbowale is getting a decent amount of work with the first team offense. He’s had back-to-back strong performances in the preseason games. First time we’ve seen him run with the starters this much.

Ogunbowale was the only bright spot for the Bucs offense on Friday night against the Miami Dolphins. He led the team in rushing with 34 yards on 13 carries. A bigger back with a nice build, perhaps Bruce Arians could be looking to add him into a significant role with the organization. For now, though, he should make the roster as a depth piece.

For whatever unholy reason out there, the Falcons let Matt Ryan pretty much play a half of pointless football. His offensive line did him zero favors, and the New York Jets consistently pressured him up the middle and were credited with three sacks. Somehow, Ryan walked out of that game as one of the biggest winners of the week.

Every single Matt Ryan drop back vs the Jets.

Did well overall given the pressure he was under. pic.twitter.com/aHbXkbTwQi

The former MVP finished going 10 of 14 for 118 yards and leading the team down the field to score. Three of those incompletions were drops, and one barely missed his target. Avoiding the pressure, Ryan continued to make great throws and keep drives alive for Atlanta’s offense.

It was a pointless MVP performance it a game that didn’t matter, but expect that from Ryan this season every week.

Four years ago, Laquon Treadwell was supposed to be the next big name receiver in the NFL. He’s now fighting for a roster spot as one of the biggest bust in recent memory. Perhaps he might be changing that narrative if Sunday sent him in the right direction.

Treadwell finished with four receptions on four targets for 47 yards. Consistently finding ways to get open and making defenders hold him for penalties, the former first-rounder somewhat looked like a first-round prospect…against third-stringers.

Now watch New England trade for him and turn him into another superstar.

Baltimore paid top dollar to add Mark Ingram into their backfield. The former Heisman winner will likely see a majority of carries early, but that doesn’t mean he’ll end the season that way. Justice Hill is going to compete to become the future back for the Ravens Flock.

Crazy body control by Justice Hill on this TD run. Completely stops his momentum then finishes through contact to get in the endzone. pic.twitter.com/8TQcTwAt8d

Hill finished with team-high 49 yards on 10 carries and scored a 1-yard touchdown during week 2 of the preseason. From the get-go, the former Oklahoma State runner made defenders miss in the open field, use power to pick up first downs and was a nuisance to stop on the ground.

Hill is going to see his stock rise quickly. You might want to snatch him up for Fantasy as a late-round gem.

Christian Wade has been making headlines as the next rugby player trying to play professional football. Here’s the thing; he’s actually good. After scoring a 67-yard touchdown in week 1 in the preseason, the prospect from the nation overseas doubled down on his stock against Carolina.

In the fourth quarter, Wade broke free for a 48-yard gain and set Buffalo up for the score. He also finished with a pair of carries for four yards. In his first two NFL games, the English enigma (patent pending) has created multiple highlight moments to gain traction heading into roster cuts.

He’s probably not going to make the final 53 man team, but don’t be shocked if Buffalo keeps them on their practice squad. There’s plenty to learn, but Wade might be the one guy they don’t want to lose.