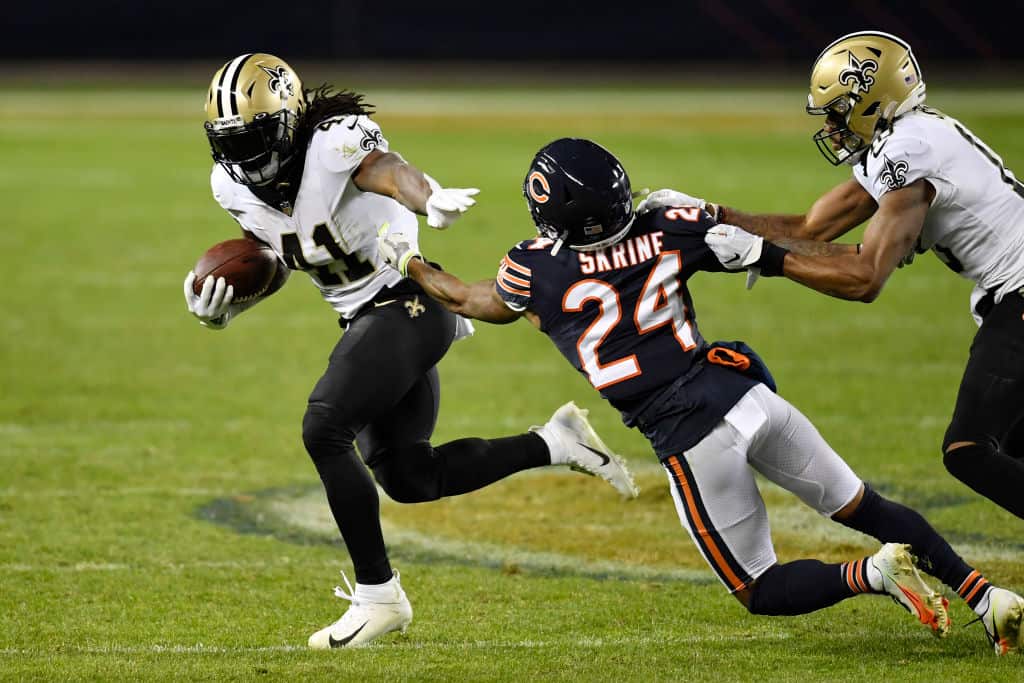 Every once in a while, a playoff game comes along that NFL Recap is excited to preview and cannot wait to watch. This is not that game. The Chicago Bears tumbled into the playoffs despite a 35-16 Week 17 loss to the Green Bay Packers thanks to some late-season wins against soup cans and the NFL’s decision to add an extra Wild Card team. The New Orleans Saints were hoping for a Bears win so they could enjoy a much-needed bye to get Michael Thomas (ankle) and Alvin Kamara (reserve list) back and allow Drew Brees (ribs) to rest, so his downfield throws don’t look like sinker-sliders.

Even if the Saints get Thomas and Kamara back, this has the makings of a grimy defensive duel. In this playoff preview, NFL Recap thinks that despite the Bears’ reputation, the Saints could have an edge in such a duel. You can catch this Wild Card game on Sunday, January 10 at 4:40 PM ET on CBS, Nickelodeon, and Amazon Prime Video.

The Saints spent most of 2020 looking like the team to beat in the NFC. They even won three straight games with Taysom Hill starting in place of an injured Drew Brees. The Taysom magic wore off, however. Brees has looked extra rickety in his return from a serious rib injury, and the late-season absence of WR Michael Thomas completely nerfed the Saints passing game.

Related | When do the 2021 NFL playoffs start? Updated schedule and start times

Chicago Bears’ season in a nutshell

They were “frauds” when they started the season 5-1. They were “exposed” by a six-game losing streak. But as that streak wore on, Mitch Trubisky returned from his annual benching and looked a little better. David Montgomery returned from injury to provide more offensive balance down the stretch. They may not be great, and they sure ain’t pretty, but the Saints cannot afford to look past a Bears defense with a knack for dragging opponents down to their offense’s level.

Trying to find positives in this playoff preview, the Bears defense entered Week 17 ranked first in the NFL at stopping opponents’ top wide receivers, per Football Outsiders. Cornerback Kyle Fuller deserves a share of the credit, although he generally lines up on the offensive right instead of shadowing top receivers. Khalil Mack and the Bears pass rush also do their part to suppress anything an opponent tries to do down the field.

The Saints have the NFL’s best first-down offense, per Football Outsiders. In large part, because they averaged 5.1 yards per rush on first downs entering Week 17, tied with the Tennessee Titans for second in the NFL (the Vikings led the NFL with 5.3). Credit goes to Kamara, Sean Payton’s versatile scheme, and an offensive line led by tackles Terron Armstead and Ryan Ramczyk, which has been among the league’s best for years.

Kamara led the Saints with 83 receptions, but Emmanuel Sanders is the only other player with more than 50 receptions. Brees’ late-season struggles were exacerbated by the lack of reliable downfield targets.

Trubisky’s stats when throwing left entering Week 17: 25-of-45, 236 yards, three touchdowns, no interceptions, a 55.6% completion percentage, 5.2 yards per attempt, a 92.5 efficiency rating. Trubisky’s yards-per-attempt ranks 39th among quarterbacks who threw at least 25 passes marked “left” in the Sports Info Solution database. That would indicate that he threw tons of screens and incomplete passes. So yes, this is still a thing.

The Saints (without Thomas) defeated the Bears 26-23 in overtime in Week 8. Nick Foles started for the Bears in that game, not Trubisky. There really isn’t that much of a difference, and this game promises to be a lot like that one.

Expect lots of super-short passes, third-down stops, and drives that end in field goals. The status of Thomas and Kamara makes a huge difference for the Saints, of course, but even in their absence, the Saints have multiple ways of manufacturing a win. The Bears will be hoping for a sack-and-turnover slop fest. Payton and Brees are unlikely to let that happen.

(All stats via Sports Info Solutions unless otherwise cited)