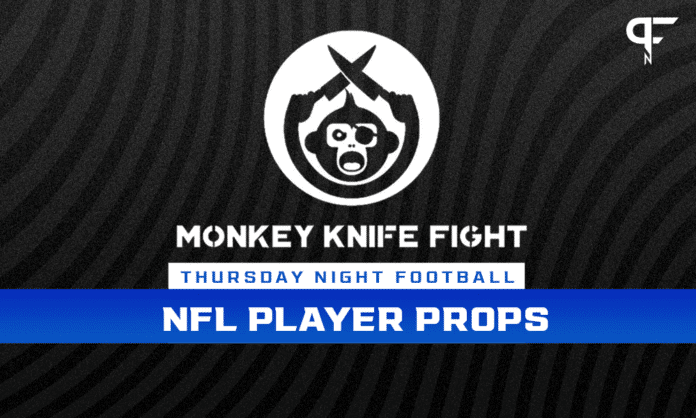 With Monkey Knife Fight's PFN promo code for a 100% instant match, what NFL player props should be your Week 2 Thursday Night Football picks?

Picking player props is becoming more and more popular for NFL fans, and Monkey Knife Fight takes that one step further. Their innovative format allows you to get creative selecting NFL player props, as we will examine the Week 2 Thursday Night Football game between the New York Giants and the Washington Football Team.

This offer is valid in all legal states.

With the 2021 NFL season kicking off Week 2 with an NFC East matchup, which Monkey Knife Fight contests should players target for Thursday Night Football?

Last week, we knew we were likely in for a shootout. We got that and then some. However, I’m not expecting that to be the case this week.

As excited as we were to see Ryan Fitzpatrick take control of Washington’s offense, that was short-lived. Now, Taylor Heinicke is once again here to save the day. Heinicke played well in relief of Fitzpatrick (hip) in Week 1, going 11/15 for 122 yards with 1 touchdown in their 20-16 loss to the Los Angeles Chargers.

This is not the first time we have seen Heinicke in this role. In the 2020 Wild Card game, he nearly knocked off the Tampa Bay Buccaneers with 306 passing yards before leaving early with a shoulder injury. While this Giants defense did just allow 260 yards to the Denver Broncos last week, I don’t see that happening in Week 2.

Despite the tough matchup, Jones is in a good position to hit the “more”

Daniel, Daniel, Daniel. The clock is ticking to figure it out before it’s too late. Unless he found a bottle of Michael’s Secret Stuff, he could be in for a challenge in Week 2.

While he did throw for 267 yards last week against a solid Broncos defense, 113 of those came in the fourth quarter when the Giants were down by 13+ points. If not for a 4-yard rushing TD as time expired, the score would have looked even more lopsided.

Washington’s defense is a step up from the Broncos, especially on the defensive line. Thus, they could be in Jones’ face all night. In his four games against Washington, Jones has cleared 235.5 yards only once while averaging 183 yards in the other three. But this also means they will likely struggle to run the ball as they slowly bring Saquon Barkley back, leaving the game solely on Jones’ shoulders.

For this More or Less contest on Monkey Night Fight, I am taking the less on Heinicke and more on Jones. Washington has enough talent to slowly bring Heinicke up to speed, whereas Jones is the only offense for New York. I think they keep the game close but will be trailing in the second half, leading to more attempts and yards for Jones.

These are low totals, and I would not want to place a significant buy-in on this Thursday Night Football prop contest. But if you do, there is a 3.6x prize on your buy-in.

While neither QB will likely light up the scoreboard, the rushing ability of Jones has to be considered here. His 27 yards last week virtually matched his career average (26), and he is likely to finish with a similar number on Thursday Night Football. That is so long as he can get past Chase Young and Montez Sweat. All he has to do is limit the drive-ending turnovers — I’ll take the +1.5 points.

Antonio Gibson was a machine in Week 1. Not only did he have 20 carries for 90 yards, but he also saw 5 targets, catching 3 for 18 additional yards. For as confident as Washington might be in Heinicke, Gibson should see a sizable role in Week 2 as they work to get the QB up to speed.

As for Terry McLaurin, I love him as a player, and this in no way has anything to do with him, but it comes down to reliance on Heinicke performing for his success. Even in a PPR scoring format as Monkey Knife Fight uses, I don’t see enough volume to offset Gibson’s workload.

In this Thursday Night Football Rapid Fire contest, I am taking Jones (+1.5 pts) and Gibson (-0.5 pts) to win their respective matchups for a 3x prize on my buy-in.

I feel like this one has already been explained in previous contest overviews. Although McLaurin finished with 62 yards last week, 32 came on one spectacular play. I’m worried about the volume this week. This is one of the few times you will ever see me projecting a slow day for McLaurin. But it’s out of his hands in a way.

As for Barkley, I don’t see how anyone could project him to have more with any confidence. He did not look 100% last week, and we know the Giants are limiting his workload. Add in a Washington defense that allowed just 83 rushing yards to RBs last season (No. 3), and I expect Barkley to be a non-factor in tonight’s game.

I am taking both McLaurin and Barkley to have less than their projected totals in this More or Less contest for a 3.6x prize.

We already talked about Barkley in the previous contest, so less on him.

Gibson is coming off a 20-carry, 90-yard game and has more than 61 yards in four of his last five dating back to last season. The Giants just allowed Melvin Gordon and Javonte Williams to combine for 146 yards on the ground across 26 carries. I am all-in on Gibson this week and will take more on his prop.

Even with Kenny Golladay in the lineup, Sterling Shepard was treated as the WR1 for all accounts, leading the team with 7 receptions for 113 yards and a touchdown. Evan Engram has been ruled out. Golladay and Darius Slayton will play on the perimeter, taking on the tougher matchups. Therefore, Shepard in the slot should be the move for Jones tonight. So long as Shepard sees at least 5 targets, he has the ability to break one for a large gain.

My other two picks for this Thursday Night Football More or Less contest are more on both Gibson and Shepard. Choose all three correctly for a 5x prize on your buy-in.

You can also take Shepard and Gibson together in a More or Less contest on their own for a 3.6x.

If you want a simple contest to enter when you redeem your Monkey Knife Fight promo code PFN, this is the one for you. If you can identify three players (minimum one from each team) who can combine for 3 or more touchdowns, you have a chance to win money. You will not find a much simpler process for NFL player prop picks for Thursday Night Football in Week 2.

The first player is Gibson. No one will see more volume, and as the lead back for Washington, he is a no-brainer.

Sticking with Washington, I’ll look at Logan Thomas. The Giants struggled mightily against Denver’s tight ends, allowing 10 receptions on 13 targets for 85 yards to the position. In his three games with Heinicke at QB, Thomas has 15 receptions on 24 targets for 167 yards. He also had the only TD reception in last week’s game.

My third choice, since you have to pick from both teams, will be Shepard. I could see this going to Golladay, but Shepard seems to be Jones’ favorite target, and he should look his way in the red zone.

For my Touchdown Dance contest on Monkey Knife Fight, I am selecting Gibson, Thomas, and Shepard to score. I’m setting my goal at 2.5 TDs, giving a prize of 4x my buy-in.

Based on your level of confidence in this Thursday Night Football player prop, you can choose different goals with corresponding prizes.