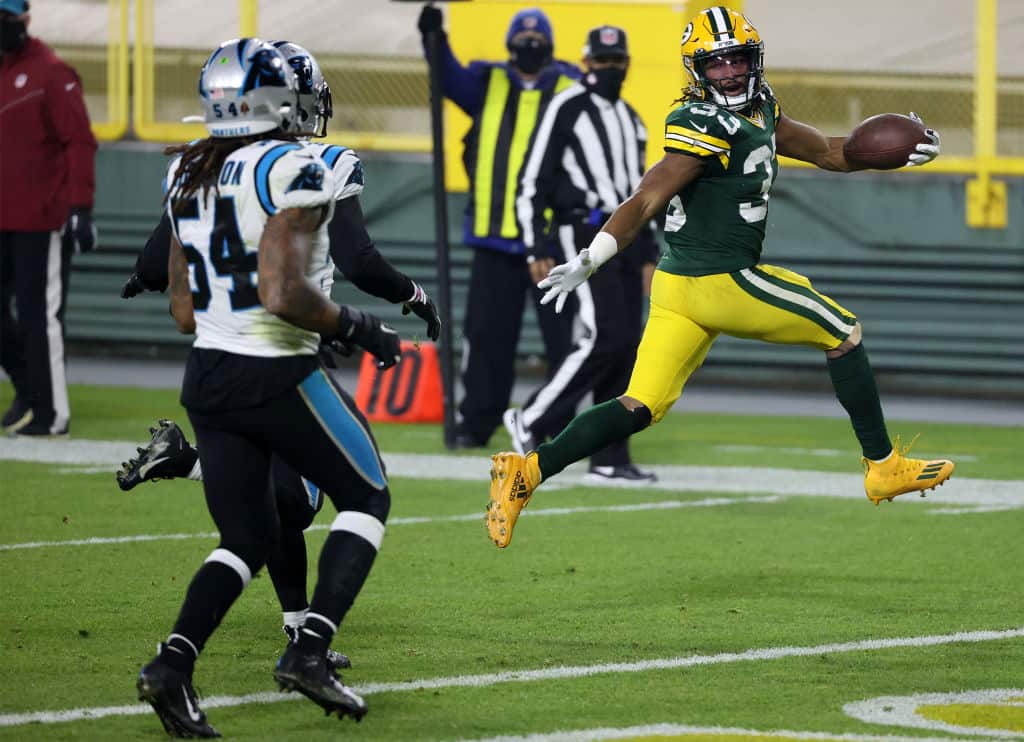 GREEN BAY, WISCONSIN - DECEMBER 19: Running back Aaron Jones #33 of the Green Bay Packers rushes for a touchdown in the second quarter of the game against the Carolina Panthers at Lambeau Field on December 19, 2020 in Green Bay, Wisconsin. (Photo by Dylan Buell/Getty Images)
What's in this article? Click to show
Which RBs can be valuable in the Week 16 Rush Hour player props contest?
Which NFL players should I target in the Week 16 Fantasy Challenge?
Who are some options in the Week 16 Touchdown Dance contest?
Want more fantasy football analysis and news?

Picking player props are becoming more and more popular for NFL fans, and Monkey Knife Fight takes that one step further. Their innovative format allows you to get creative selecting NFL player props, as we will examine in our Week 16 selections for the Sunday, December 27th, 2020, early slate. If you have never played on Monkey Knife Fight, then be sure to check out their site using our promo code PFN and get a 100% instant match bonus up to $50.

Which RBs can be valuable in the Week 16 Rush Hour player props contest?

While there are several great individual matchups this week, finding games with two great matchups aren’t the easiest thing to do this week. However, that doesn’t mean there are not any potentially profitable Rush Hour contests for Week 16, even if that means getting a bit creative.

Both David Johnson and Gio Bernard are in plus matchups

Both of these players are making their first appearance on this list because usually neither of these teams can be trusted. However, what can be trusted is their team’s ability to give up massive amounts of yards to running backs.

This game features two of the worst rushing defenses in the NFL. No one gives up more yards per game to RBs than the Houston Texans at 136.85 yards. Not far behind are the Cincinnati Bengals in fifth, allowing 116.07. For Houston, they are allowing a league-high 5.41 yards per carry. No other team is above 4.89 yards per rush, which is where the Bengals rest.

Duke Johnson is out for the Texans, making David Johnson the lock to see 85% or more of the opportunities. As for Gio Bernard, this is all based on matchup. The Bengals’ offense has been terrible since Joe Burrow went down, but it’s hard to look past this matchup of ineptitude. The Texans have played 14 games this year and allowed 17 different running backs to finish as the RB21 or better against them.

To hit our goal in this NFL prop, we need our picks to have more than 124.5 rushing yards combined if you choose the lowest prize of 2x. That’s a total each gives up on its own. This rushing prop on Monkey Knife Fight is one of the more interesting NFL player props for Week 16.

Derrick Henry is almost a must play in Rush Hour Contests

You are going to have a hard time setting a goal high enough to where I won’t consider Derrick Henry in a Rush Hour Contest on Monkey Knife. Seeing that I can pair him with one of the elite backs in the NFL in a solid matchup makes going on Monkey Knife Fight and using promo code PFN worth it on its own.

On Sunday Night, Derrick Henry and the Titans head to Lambeau Field to see Aaron Jones and the Packers. Pairing both Jones and Henry up in an NFL player prop contest in Week 16 makes too much sense. Henry is on fire down the stretch. He’s finished with 100-plus rushing yards in five of his last six games, including four of them with 133-plus yards. The Packers are allowing 4.5 yards per carry and 92.5 rushing yards per game. As long as Tennessee can keep this game close, Henry should be force-fed the ball. It only takes one punishing run to break the defenses back.

On the other side of the ball, Aaron Jones is coming off a season-high 23 touches that he turned into 158 total yards and one touchdown. Through 14 games, the Titans have allowed 10 different running backs to finish as the RB14 or better. They are giving up 4.26 yards per carry (18th) and 92.14 yards per game on the ground (18th). A significant factor for Aaron Jones is that he won’t be in a committee in Week 16. RB Jamaal Williams is unlikely to play due to the quad injury he suffered in last week’s game where Jones went off. Jones is one of the most efficient rushers in the NFL, and if he sees his average of 16-18 rushing attempts, his 5.4 avg should have us well on the way to hitting our goal.

Using our Monkey Knife Fight promo code PFN, you can play this contest and would only need more than 223.5 yards on the ground combined. NFL player prop picks like this is what makes using this site so much fun, especially if your fantasy team isn’t playing in Week 16.

Which NFL players should I target in the Week 16 Fantasy Challenge?

For those of us who play fantasy football, this might be the most fun. It’s what we know and love, and one of the reasons I was so excited to use Monkey Knife Fight promo code PFN and get started with a few more rubles in the account than I otherwise would.

Did I mention yet that I like the Titans and Packers game?

We have already mentioned the running backs for this game. So we need to add a WR to the mix. And in Week 16, there are two of the best to pick from for this NFL Week 16 player prop.

Both AJ Brown and Davante Adams are fantastic plays in this format. Adams is coming off his first game since Week 6 that he had less than 18.1 PPR points. Still, in the 11 games, Adams has played in, he’s averaged 11.5 targets per game. Wide receivers have seen a league-leading 62.5% of the targets against the Titans. They allow 16.6 receptions per game to the position (second-most) and 2.59 points per reception. The 190 yards per game they allow are the fourth-most in the NFL. In fantasy points, the Titans give up the third-most points per game to wide receivers at 42.9 points per game. There is a reason Davante Adams is the WR1 every week and especially in Week 16.

I love the home run threat of AJ Brown, but it is hard to choose him over Adams or either running back.

For this NFL prop in Week 16 on Monkey Knife Fight, I believe the combination of picks between Henry, Jones, and Adams should easily clear the 71.5 PPR points we need for the 2x prize. Only play this contest after using Monkey Knife Fight promo code PFN — it could make for a quite profitable week!

Who are some options in the Week 16 Touchdown Dance contest?

If you want a simple contest to enter when you redeem your Monkey Knife Fight promo code PFN, then this is the one for you. If you can identify three players who can combine for three or more touchdowns, you have a chance to win money. You will not find a much simpler process for NFL player prop picks in Week 16.

For this contest on Monkey Knife Fight, I like to go into the Star Shootout category. Doing that allows us to pick players from multiple games in their window. We can choose from the 1:00 PM ET games and then the 4:10 PM ET games in their own contests.

Who should you choose from the early slate?

For the 1:00 PM slate, I instantly gravitate to the Kansas City Chiefs vs. Atlanta Falcons contest. From the Chiefs, I’ll take Travis Kelce. Kelce is just 60 yards off, breaking the all-time single-season record for yards by a tight end. The Falcons have allowed 2.10 PPR points per target to TEs (third-most). There have been 11 different tight ends who’ve posted at least 41 yards and or a TD against the Falcons, including four tight ends who’ve posted 16.9 or more PPR points. Tight ends average nearly 20% more production against Atlanta. Kelce is the smash play for the Chiefs.

Why stop there? I might as well use Tyreek Hill while I am at it. Hill has seen double-digit targets in six of his last eight games. And he gets a Falcons defense that has allowed the second-most PPR points per game (43.8) to wide receivers this year. It’s Tyreek Hill. There honestly isn’t much I need to say to convince you at this point. Just keep an eye on the injury news surrounding Hill prior to locking this in.

For our third player, I’ll take Bears’ RB David Montgomery. For some reason, this is a hot Bears offense. They have scored 25-plus points in four straight games, including 30-plus points in each of the last three games. A lot of that has come on the back of Montgomery’s production. In his previous four games, he has 434 rushing yards and has scored five TDs in his last three. Now he gets a Jaguars defense that is 30th in the NFL in points allowed to RBs at 28.75. They allow 116 rushing yards per game (4th), 4.54 yards per carry (10th), and 16 total TDs (6th).

Hitting the 1.5x prize of 2.5 touchdowns should be reasonably simple. If they can manage four scores, we are rolling in rewards thanks to a 4x return. Just for ease of picks, this is one of my favorite NFL player prop for Week 16.

Last week, this was my lock of the week, and it hit big. For the third time, we are going back to the Packers and Titans game. But this time, all we care about are touchdowns.

For this NFL prop in Week 16 on Monkey Knife Fight, the combination of Henry, Jones, and Adams should easily clear the 2.5 touchdowns we need for the 2x prize. If you want to go higher, the 3.5 TD goal will bring a 4x prize. The ability to choose your goal is part of the beauty of Monkey Knife Fight. Only play this contest after using Monkey Knife Fight promo code PFN — it could make for a quite profitable week! You can’t find another DFS site that allows you to find matchups like this.