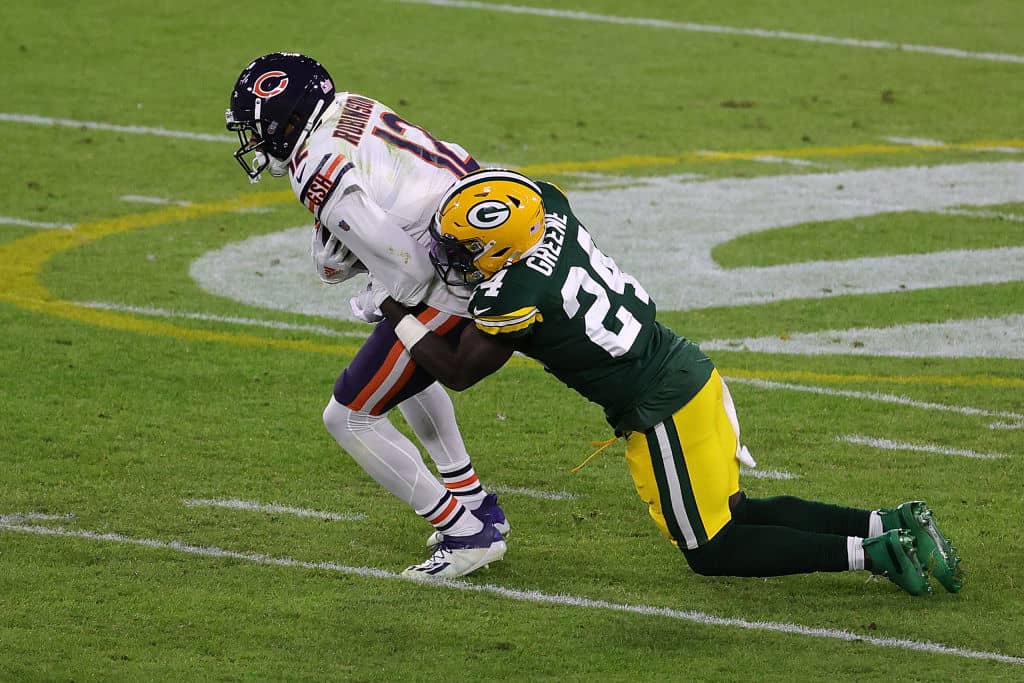 GREEN BAY, WISCONSIN - NOVEMBER 29: Allen Robinson #12 of the Chicago Bears is brought down by Raven Greene #24 of the Green Bay Packers during a game at Lambeau Field on November 29, 2020 in Green Bay, Wisconsin. The Packers defeated the Bears 45-21. (Photo by Stacy Revere/Getty Images)
What's in this article? Click to show
Which RBs can be valuable in the Week 13 Rush Hour player props contest?
Which NFL players should I target in the Week 13 Fantasy Challenge?
Who are some options in the Week 13 Touchdown Dance contest?

Picking player props is an element of NFL fandom that is becoming more and more popular, and Monkey Knife Fight takes that one step further. Their innovative format allows you to get creative selecting NFL player props, as we will examine in our Week 13 selections for the Sunday, December 6 2020 early slate. If you have never played on Monkey Knife Fight, then be sure to check out their site using our promo code PFN and get a 100% instant match bonus up to $50. Let’s take a look at some of our thoughts when it comes to the Monkey Knife Fight Fantasy Challenge, Rush Hour Contest, and Touchdown Dance.

Which RBs can be valuable in the Week 13 Rush Hour player props contest?

There are a number of options to fill out the Rush Hour contest in Week 13. However, two games in particular figure to have a lot of rushing involved. In those two games, all of the top four in terms of rushing yards per game are in action. It is hard to go wrong with any of those four and there are plenty of mix-and-match options if you wanted to go with multiple entries.

Derrick Henry is averaging 114.3 yards per game and has racked up 414 yards on 74 carries in the last three weeks. The Browns defense has been somewhat stout against the run this year, allowing just 4.1 yards per attempt. However, they have not faced a back as good as Henry yet in 2020.

On the other side of the ball is Nick Chubb. Chubb averages 102.7 yards per game and has 100 or more rushing yards in five of his seven games in 2020. Chubb leads all running backs with an incredible 6.3 yards per attempt on 115 carries. Both Chubb and Henry make for great NFL Week 13 player props to consider as one of your picks.

The only other back averaging over 100 yards per game on the season is Dalvin Cook. Cook has topped 150 yards three times this season and has gone over 100 in five games. The Jaguars allow over 100 rushing yards per game on average and Cook should be able to find success.

James Robinson ranks third at the position in yards per game with 80.9. However, through the first six games, he was averaging just 60.3 yards per game. In the last five, he has upped that 105.6, on an average of 21.8 carries per game. Amazingly, he has done that despite the Jaguars losing all five games, demonstrating he is perhaps one of the most game-script proof backs in the entire league right now.

Are there any other options to consider in Week 13?

The matchup between the Chicago Bears and Detroit Lions also offers a soft running back matchup. Both teams rank in the top eight in yards allowed to running backs on the ground. However, with D’Andre Swift out, the only realistic option is David Montgomery, who might be better suited to our next contest. The main four backs are the ideal combination of player prop picks for this contest in Week 13 of the NFL. However, if you want to spread your investment, Montgomery offers a fifth option to do that with.

Which NFL players should I target in the Week 13 Fantasy Challenge?

I already mentioned that Montgomery has a somewhat soft matchup against the Lions in terms of rushing yards. However, the Lions also allow the joint third-most receiving yards to running backs. In addition to all of that, they have allowed 21 total touchdowns to the position. No team in the league allows more fantasy points to the RB position in PPR formats than the Lions.

Related | D’Andre Swift Injury Update: Will he play in Week 13?

Despite everything going on with the Chicago Bears, Allen Robinson remains a fantasy star. Last week, he posted 74 yards and two touchdowns on eight receptions for a monster 27-point fantasy game. Opportunity is key for Robinson, with nine or more targets in nine of his 11 games. He is carrying a knee injury into the game but if he is active he is a great option in this format. Averaging around 0 targets per game makes Robinson an ideal selection as one of your NFL Week 13 player props.

Plenty of fantasy points available in the Minnesota Vikings and Jacksonville Jaguars game?

We already touched on the potential value of both Cook and Robinson. However, there is value to be found elsewhere as well. Both Justin Jefferson and Adam Thielen are threats to find the end zone. The Jaguars have allowed 12 touchdowns to the position, and the eight-most fantasy points to WRs (40.36).

On the Jaguars side, DJ Chark makes for an interesting play. The Vikings have allowed 18 touchdowns and 2007 receiving yards to opposing receivers. That is good enough for them to allow the third-most fantasy points per week to the position (42.92).

What are some alternative options in Week 13?

The Raiders should be a nice matchup for this, facing a Jets team allowing 41.22 points per week to the position. However, the Raiders do not have a clear and obvious WR option to target in Week 13. The Jets do also allow 14.89 points per week to tight ends, so Darren Waller could make for an interesting player prop to pick in this NFL Week 13 contest.

If a tight end is a way you want to go, then TJ Hockenson is an attractive selection as well. The Bears defense allows over 15 fantasy points per game to the TE position, and Hockenson should continue to see plenty of opportunities with Kenny Golladay ruled out. The only concern with tight ends is that they rarely put up the kind of 20-point outing you really need from your options in this contest. Choosing a tight end as one of your NFL Week 13 player props is limiting your ceiling. That means you really need to hit your other selections perfectly.

Who are some options in the Week 13 Touchdown Dance contest?

If you want a simple contest to enter when you redeem your Monkey Knife Fight Promo Code of “PFN”, then this is the one for you. If you can identify three players who can combine for three or more touchdowns, you have a chance to win money. You will not find a much simpler process when it comes to NFL player prop picks in Week 13.

Henry and Cook both have double-digit rushing touchdowns, with the next closest on the slate being Gurley at nine. James Robinson has three in his last five games, and Nick Chubb has two in his last three. This is a spot to avoid Montgomery as one of your Week 13 player prop selections. Through 10 games he has just three total touchdowns.

On the receiving side, Adam Thielen has 11 touchdowns and AJ Brown has eight. Both are solid options to contribute in any given week. Jefferson also has three touchdowns in the last two weeks.

Alvin Kamara and his 12 combined touchdowns will also be an appealing name. However, Kamara has just one touchdown in the two games with Taysom Hill under center. For now, he appears to be a player to avoid.