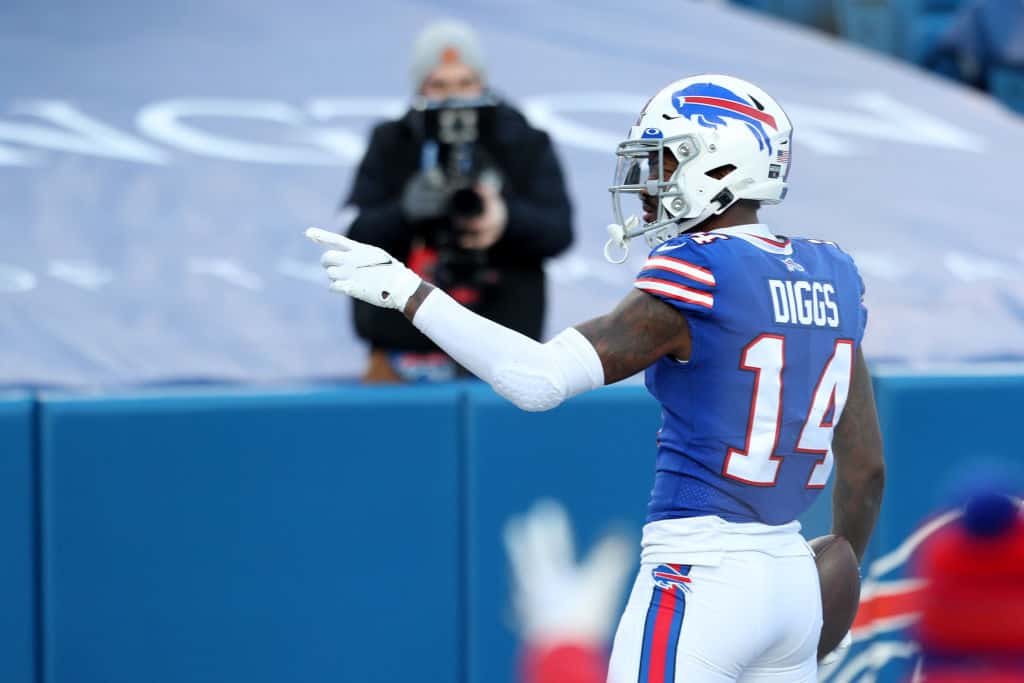 ORCHARD PARK, NEW YORK - JANUARY 09: Stefon Diggs #14 of the Buffalo Bills celebrates after scoring a touchdown during the fourth quarter of an AFC Wild Card playoff game against the Indianapolis Colts at Bills Stadium on January 09, 2021 in Orchard Park, New York. (Photo by Bryan Bennett/Getty Images)
What's in this article? Click to show
Which NFL RBs can be valuable in the Divisional Round Rush Hour player props contest?
Which NFL players should I target in the Week 17 Fantasy Challenge?
What are some NFL player prop options in the Divisional Round Touchdown Dance contests?
Want more NFL news and analysis?

Picking player props are becoming more and more popular for NFL fans. Monkey Knife Fight takes that one step further. Their innovative format allows you to get creative selecting NFL player props, as we will examine in our Divisional Round selections. If you have never played on Monkey Knife Fight, then be sure to check out their site using our promo code PFN and get a 100% instant match bonus up to $50.

Which NFL RBs can be valuable in the Divisional Round Rush Hour player props contest?

As the competition gets better, these NFL player prop picks will be harder and harder to nail down. However, that doesn’t mean there are not any potentially profitable Rush Hour contests for the Divisional Round of the playoffs.

Los Angeles Rams rookie Cam Akers has been on fire as of late. Ove his last six games, Akers has 555 rushing yards, including a 131-yard performance in his first career playoff game. Volume is on his side as well, as Akers has 55 total touches in his last two games. In those previous two games without Darrell Henderson, Akers has seen 55 of the 69 RB touches (80%).

The worst part of the Green Bay Packers’ defense is stopping the run. Green Bay gave up the fifth-most fantasy points to RBs (26.93), 91.56 rushing yards per game during the regular season, and they’re giving up 4.5 yards per carry. Despite the Packers holding their opponents to a league-low 60.9 plays per game, there were just three games this season where running backs failed to total at least 22 touches against them.

Jared Goff will start, but there is no way that head coach Sean McVay will put the game in his hands. Trying to go throw for throw against Aaron Rodgers will be a death sentence for the Rams. Expect Cam Akers to see 20+ touches in this game.

If the Packers are winning, expect a heavy dose of Aaron Jones

On the other side, I will go with the obvious answer, Aaron Jones. Jones is one of the most efficient rushers in all of the NFL. Of the 31 RBs who saw 130 or more carries in 2020, Jones’s 5.5 yards per carry ranked third-highest in the NFL.

Nothing about the Rams’ defense is easy. They allowed the fewest passing yards per game (212.56). In addition, they were sixth in rushing yards per game at 112.69 and gave up the fewest fantasy points to wide receivers. If things go according to the script, the Packers should lead in the 4th quarter and use the rushing game to seal the victory.

Even if the Rams don’t allow Jones to break a long run, his efficiency should work very well in conjunction with expected volume.

To hit our goal in this NFL prop pick, we need our picks to have more than 169.5 rushing yards combined if you choose the lowest prize of 2x. This rushing prop on Monkey Knife Fight is one of the more interesting NFL player props for the Divisional Round weekend.

Which NFL players should I target in the Week 17 Fantasy Challenge?

For those of us who play fantasy football, this might be the most fun. It’s what we know and love. It’s one of the reasons I was so excited to use the Monkey Knife Fight promo code to get started with a few more dollars in the account than I otherwise would.

I love the games this weekend from a fan standpoint. However, when trying to build a lineup for the Fantasy Challenge, not quite so much.

I am going to follow the points and talent by targeting the Kansas City Chiefs vs. Cleveland Browns game. The trick, though, is I am playing the first-half rather than the full game. Andy Reid has had a week to scout and develop a game plan. I think the Chiefs come out on fire to start the game. Also, we see a slightly lower total needed to hit.

For Kansas City, it’s the usual suspects finding their way into my Monkey Knife Fight picks

Tyreek Hill and Travis Kelce will be in every NFL player prop for me nine times out of 10. Hill has seen at least 10 targets in six of his last nine games and is now coming off two full weeks of rest. There have been 16 different receivers who have totaled 15+ PPR points against the Browns this year. That’s not even including the three Pittsburgh Steelers’ receivers who scored 20-plus PPR points last week, thanks to 52 minutes of garbage time.

Cleveland gave up the eighth-most fantasy points to WRs as a whole during the regular season (39.65), including 20 touchdowns (sixth) and 175.31 yards per game to receivers.

The other pick is Travis Kelce because no one can touch what he can do on the field. The Browns are 30th against the tight end position (15.42), and Travis Kelce is the best tight end in the NFL. Out of all players in the NFL, no one had a higher startable percentage than Travis Kelce.

I love Nick Chubb in the game, and I think he is the better running back for the Browns. Yet, if we look at weaknesses vs. strengths, Kareem Hunt against the RB pass defense for Kansas City has its merits.

Kareem Hunt is one of the best RBs out of the backfield as a pass catcher. It resulted in 174 routes when both he and Chubb were active. With the Browns being massive underdogs, he has to play a large factor in this game.

During the regular season, 16 running backs saw 25 or more yards through the air against the Chiefs. This led to them allowing a league-high 846 receiving yards to RBs in 2020.

In terms of fantasy points through the air, the Chiefs allowed the second-most to the position at 12.98 per game. The only team worse were the Detroit Lions, and we always targeted RBs against them. Don’t forget, Hunt can run the ball too. He’s scored five rushing touchdowns over their last eight games.

By going with a first-half contest, we drop the scoring goal from 70.5 points to 33.5 points. For this NFL Divisional Round prop pick on Monkey Knife Fight, I believe the combination of picks between Tyreek Hill, Travis Kelce, and Kareem Hunt should clear the 33.5 PPR points we need for the 2x prize. Only play this contest after using Monkey Knife Fight promo code PFN — it could make for a quite profitable week!

What are some NFL player prop options in the Divisional Round Touchdown Dance contests?

If you want a simple contest to enter when you redeem your Monkey Knife Fight promo code PFN, then this is the one for you. If you can identify three players who can combine for three or more touchdowns, you have a chance to win money. You will not find a much simpler process for NFL Divisional Round player prop picks.

For this contest on Monkey Knife Fight, I always went for the Star Shootout category. Doing that allowed us to pick players from multiple games in their window. However, that isn’t an option this week. However, we still believe this is the best place to make considerable returns from the contests we discussed.

If you would have played the Jonathan Taylor, Stefon Diggs, Zach Pascal combo that I talked about last week, you also won a share of the $5,000 Touchdown Dance prize because each player scored.

Josh Allen continues to show his incredible progression in year three of his career. Allen went 26 of 35 for 324 yards and two touchdowns through the air, and added 11 carries for 54 yards and a touchdown on the ground in last Saturday’s win over the Indianapolis Colts. If he succeeds, he will need his number one option and my first choice, Stefon Diggs.

Stefon Diggs just shredded Indianapolis for 132 yards and a touchdown on six catches. He was the WR3 in PPR formats this season. There is no reason to stay away from him this week, even if the Ravens are ninth against the position (33.48). He has gone for over 100 yards in four of his last five games. During this stretch, Diggs has scored five TDs and seen seven red zone targets.

A pair of Ravens fill out my Touchdown Dance player picks

What do the Baltimore Ravens do well? Run the football. The Ravens were the number one run offense in the regular season, averaging 236 rushing yards a game.

Rookie J.K. Dobbins has taken off and taken over the backfield. He has scored a touchdown in each of his last seven games and saw every red zone RB carry last week. Buffalo allowed 15 touchdowns to RB in the regular season and just gave up 76 yards and a score to Jonathan Taylor.

Rounding out the selections is TE Mark Andrews. Last week against the Colts, the Buffalo Bills allowed Jack Doyle, Mo Alie-Cox, and Trey Burton to combine for 136 yards and a touchdown.

During the regular season, the Bills gave up the fifth-most points to TEs per game (14.83) and eight touchdowns. There have been seven tight ends on the year who finished with top-12 numbers against the Bills, including five who finished with 17.8 or more PPR points.

Andrews saw six targets last week and has seen 23 in the previous three games. For Baltimore to pull off the upset, Andrews has to be a key contributor, especially in the red zone.

We need this group of three players to have more than 2.5 touchdowns for a 2x prize on these Divisional Round NFL player prop picks. If they can manage four scores, we are rolling in rewards thanks to a 4x return.