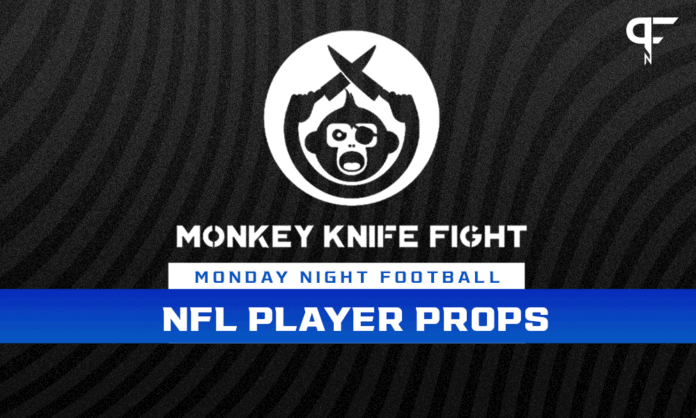 With Monkey Knife Fight's PFN promo code for a 100% instant match, what NFL player props should be your Week 2 Monday Night Football picks?

With the NFL back and better than ever in 2021, which Monkey Knife Fight contests should players target for Monday Night Football?

There is no getting around it — Aaron Rodgers and the Packers were awful last week. Rodgers had one of the worst performances of his career in the season opener, going 15/28 for 133 yards and 2 interceptions. It was so bad that Jordan Love, who had never seen a regular-season snap, played nearly all of the fourth quarter.

Do I think Rodgers will need to throw for 300 yards to beat the Lions? No. But do I think he wants to, so he can shut everyone up? You’re darn right. The Lions allowed Jimmy Garoppolo to throw for 314 passing yards against them last week, and in 2020, no team allowed more yards per attempt (8.5) than Detroit.

I expect the Lions to be down big in this game, leading to Goff throwing quite a bit. And we saw what it could lead to in Week 1 in a similar scenario. He threw for 338 yards and made a blowout into an interesting game. With that said, the Packers’ defense should have no issues shutting him down on Monday night.

For one, Detroit’s top WR, Tyrell Williams, is out with a concussion. Also, WR Kalif Raymond is less than 100% after sustaining a thigh injury in Saturday’s practice. The Packers allowed only 237 passing yards per game in 2020, and Goff went over this projected total in just half of his games with a far more talented offense.

For this Monkey Knife Fight More or Less contest, I am taking the more on Rodgers (295.5) and less on Goff (258.5). This Monday Night Football prop contest has a 3.6x prize on your buy-in.

In a Reception Connection prop contest, the concept is to pick three players who will exceed the set reception goal. Much like Touchdown Dance, this also has a scaling goal and prize threshold to choose from that varies based on the game.

Sticking with the theme of the Packers airing it out, the easy pick is Davante Adams. He is coming off a 115-reception season where even the best of the best could not contain him. Spoiler alert: Detroit does not have one of those best-of-the-best CBs on their roster, especially not after losing Jeffrey Okudah (Achilles) for the season.

My second pick would be Marquez Valdes-Scantling. Even in what was an ugly game, MVS was a lone bright spot. He actually led the Packers in targets with 8 and doubled Adams in air yards with 101. He has been my streamer pick of the week for fantasy, and I am carrying that into Monkey Knife Fight.

Who on the Lions will rack up receptions?

As for the Lions, do they have anyone other than T.J. Hockenson? Even when the team was at full strength, he recorded 11 targets and 8 receptions. In fact, Detroit WRs combined for just a 40.3% target share last week. With Jaire Alexander and Kevin King shutting down everything on the perimeter, look for Goff to focus on Hockenson early and often as his primary target.

If you want a simple contest to enter when you redeem your Monkey Knife Fight promo code PFN, this is the one for you. If you can identify three players (minimum one from each team) who can combine for 3 or more touchdowns, you have a chance to win money. You will not find a much simpler process for NFL player prop picks for Monday Night Football in Week 2.

The first pick has to be Adams, and it’s not even close. In 2020, Adams saw an average of 9.3 targets per game and hauled in an astounding 18 touchdowns. The Lions just allowed 49er WRs to account for 219 receiving yards and 2 TDs in Week 1.

My second option from the Packers would be Aaron Jones. For as bad as the Lions are against WRs, they are even worse against RBs. In 2020, they were last in fantasy points allowed to the position (32.47), 30th in total yards (164), and gave up a league-leading 29 total touchdowns. It just so happens that Jones had his best game last season at home against Detroit, rushing for 168 yards and 2 touchdowns while amassing 68 receiving yards and another score. Oh yeah, that was in Week 2 as well.

Who can score on Detroit’s roster?

Since we have to choose an option from both sides, I’ll take a swing with D’Andre Swift. Despite what Jameis Winston did last week, the Packers are most vulnerable to running backs. They allowed RBs to combine for 139.3 yards per game (11th) and gave up 14 rushing touchdowns and 5 receiving touchdowns to backs in 2020. Even when questionable with a groin, Swift carried the ball 11 times last week and hauled in 8 of 11 targets for 104 total yards and 1 TD.