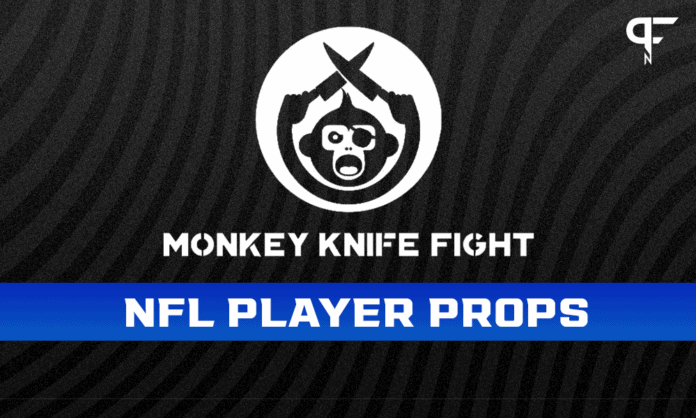 With Monkey Knife Fight's PFN promo code for a 100% instant match on your deposit, which Week 3 NFL player props should you consider?

Player props are becoming more and more popular for NFL fans, and Monkey Knife Fight takes that one step further. Their innovative format allows you to get creative selecting NFL player props. Let’s examine the Week 3 slate of games and see which contests players should target.

Which Monkey Knife Fight contests should fantasy football players target for Week 3 in the More or Less contest?

The loss of Jarvis Landry (MCL) is significant for Cleveland’s passing game. While they do get Odell Beckham Jr. (ACL) back in Week 3, it’s unclear if Browns head coach Kevin Stefanski is willing to give him a full workload in his season debut. It’s not like Cleveland needs to throw the ball a ton. This is a team built around the rushing game and the NFL’s best one-two punch in Nick Chubb and Kareem Hunt.

While Baker Mayfield threw for 321 yards in Cleveland’s season opener against the Chiefs, he only managed 213 yards in Week 2 despite completing 90% of his passes against the Texans. Mayfield and the Browns will be just fine, but I expect a heavy dose of the run against a Bears team that allows just 264 passing yards per game.

Even though Justin Fields looked like a rookie at times last week, he made a few great reads while subbing in for Andy Dalton. Now, Fields has the benefit of an entire week with first-team reps and preparation — that can’t be understated.

The Bears have one of the better pass-catching groups in the NFL in Allen Robinson, Darnell Mooney, and TE Cole Kmet. Add in Fields’ aggressiveness and his ability to extend plays, and I think he should easily clear his passing yardage total. Such a performance would put pressure on head coach Matt Nagy, forcing him to decide between rookie and veteran once Dalton returns. Fields is playing for his job with a big chip on his shoulder.

Everyone was panicking after Week 1 when King Henry looked more like the court jester, rushing for a mere 58 yards. Then he came back in Week 2, said “hold my goblet,” and took off for 182 yards and 3 touchdowns, including a 60-yard breakaway TD in the fourth quarter.

In this Monkey Knife Fight prop, you are essentially predicting whether or not Henry has a breakaway carry. That’s what this comes down to, as 104.5 yards is a hefty total if Henry simply averages 4-5 yards per carry (even at his volume).

I know fantasy managers are freaking out about Jonathan Taylor, but I am not sure they should. So far, Taylor has 32 attempts for 107 yards, adding 7 receptions for 62 yards. However, Taylor is averaging 20 opportunities per game, boasts 68.1% of the Colts’ RB carries, and leads the league in red-zone carries with 12.

The volume is there, and Taylor will bounce back to the mean. There is no better time for that to start than Week 3 when Taylor faces the Titans — one of the NFL’s best RB matchups — while Carson Wentz is a game-time decision.

With the potential for larger prizes by pitting multiple positions against each other, which Rapid Fire contests could be worth looking at in Week 3 on Monkey Knife Fight?

Without question, Justin Herbert has been sensational, averaging 337.5 passing yards per game through two weeks. Keenan Allen is one of the best WRs in the NFL, and Mike Williams is finally living up to his No. 7 overall draft pedigree.

However, this is Patrick Mahomes we’re talking about. He’s been doing, well, Mahomes things so far this season, averaging 340 yards per game with 6 touchdowns along the way. In any other week, I’d be all in on Herbert — but not this time.

Clyde Edwards-Helaire, meanwhile, has been brutal. Despite averaging 14.5 rushes per game, he’s posted just 44.5 yards per game with a paltry 3.3 ypc despite running behind an upgraded Chiefs offensive line.

While observers are starting to question CEH, no one is questioning Austin Ekeler. Though he started the season with a tweaked hamstring, Ekeler is averaging 55.5 yards per game (4.6 ypc) on 24 rushes. LA’s offensive line is looking sensational, especially with road grader Rashawn Slater at left tackle. Ekeler is the better player in the better matchup — Kansas City is 29th vs. RBs — and is getting the bonus.

In this Rapid Fire player prop on Monkey Knife Fight, I am taking Mahomes and Ekeler (+4.5) for a 3x prize on my buy-in.

If you want a simple contest to enter when you redeem your Monkey Knife Fight promo code PFN, this is the one for you. If you can identify three players who can combine for 2 or more touchdowns, you have a chance to win money. You will not find a much simpler process for NFL player prop picks in Week 3.

Additionally, if all three of your players score a touchdown, you win a share of the $5,000 prize pool.

Target the best offenses — sometimes it’s that simple. This game likely will have the highest point total of Week 3 and is full of the best pass-catchers in the NFL. For example, three players in this game are all -105 or better to score a touchdown. That’s absurd!

For the Chiefs, keep it simple and lock in Tyreek Hill and Travis Kelce. There’s no real reason to choose anyone else. As for the Chargers, things are a bit more intriguing. A case can be made for Ekeler, Allen, or Williams. Although Williams has found paydirt in back-to-back games, I will choose Allen out of the bunch. He’s one of just three receivers to gain at least 100 yards in both Week 1 and 2, and he saw 10+ targets in 11 of his 13 full games in 2020.