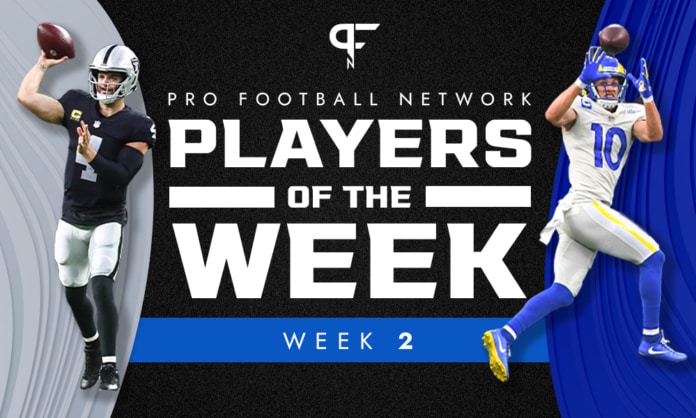 The NFL Player of the Week awards are back for Week 2. A part-time player made a big enough impact to win DPOTW for this week.

The NFL Player of the Week for Week 2 needed a bit of a facelift. See, a quarterback probably could — and probably should — win the offensive award every week. So, here at PFN, we changed up the format to differentiate those men hurling the football 40 times a game from their skill position counterparts by adding a Quarterback of the Week category.

NFL Player of the Week | Week 2

Quarterback of the Week | Derek Carr

And Watt was dominant to start the game. Despite Watt’s performance, Carr finished the first half 12-of-16 for 119 yards. He wasn’t lighting up the scoreboard yet, but he was working efficiently.

How Carr won QB of the Week

Carr threw the ball another 21 times in the second half, completing 16 passes. The most significant difference was in explosive plays. Carr ultimately threw for 263 yards in the second half alone. This is what earned him NFL Player of the Week honors for quarterbacks.

Carr became just the fifth QB in NFL history to throw for at least 375 passing yards and 2 touchdowns in each of his team’s first two games. With a banged-up Miami Dolphins team coming to Las Vegas next week, Carr could be one of the early MVP frontrunners if he’s able to propel this roster to 3-0.

Kupp is third in receiving yards through two weeks of the NFL season, trailing only Deebo Samuel and Tyler Lockett (who lost the POW tiebreaker against Kupp here). He’s currently catching over 76% of his targets and averaging a ridiculous 12.9 yards per target, which would have comfortably led the NFL last season. Kupp is also currently leading the league in receptions with 16.

But this is about his NFL Player of the Week performance. Kupp is so much better after the catch than he’s given credit for. While the gunslinging Matthew Stafford averaged only 3.5 air yards per attempt to Kupp against the Colts, Kupp managed an astounding 16.1 yards after the catch.

Some of that production came from screens that were well blocked, but Kupp’s contact balance and vision as a runner make him an outstanding weapon with the ball in his hands. He’s a big receiver at 6’2″ and 210 pounds, but he moves well for his size. Kupp’s stiff arm could help him pass for a running back, and he also has the ability to make defenders fall over as a route runner.

This award is so well-deserved for Edwards, who wasn’t even a Day 1 starter for the Buccaneers. Jordan Whitehead had been battling injuries before his Week 2 debut against Atlanta. Meanwhile, Sean Murphy-Bunting’s significant injury allowed Edwards the opportunity to remain on the field.

Still, Edwards played in just 54% of Tampa Bay’s defensive snaps. I’d say he made the most of his opportunity by earning NFL Defensive Player of the Week honors. He finished the day by getting his hands on 3 passes, with 2 of them resulting in pick-sixes.