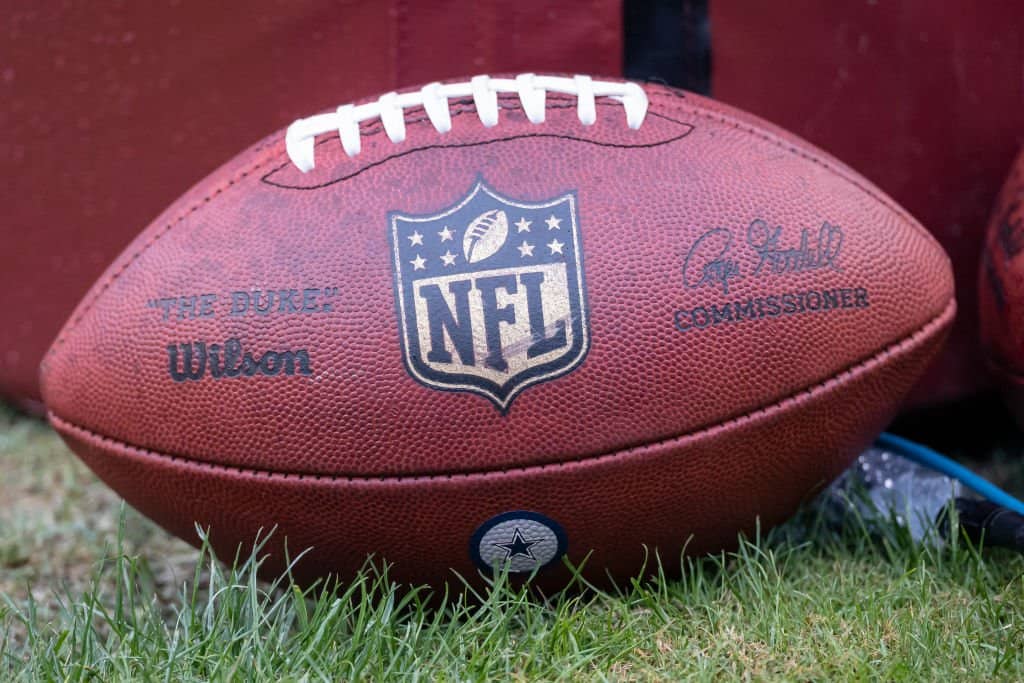 LANDOVER, MD - OCTOBER 25: A detailed view of an official NFL football with a Dallas Cowboys logo before the game between the Washington Football Team and the Dallas Cowboys at FedExField on October 25, 2020 in Landover, Maryland. (Photo by Scott Taetsch/Getty Images)
What's in this article? Click to show
Is there football on Sunday, and if so, what channel is the NFL game on today?
Super Bowl XL results
What are some important dates to know since there are no more NFL games today?
Want more NFL news and analysis?

Is there an NFL football game on Sunday? While we have grown accustomed to always have NFL games on TV, today is a bit different.

Is there football on Sunday, and if so, what channel is the NFL game on today?

Unfortunately for those who either cover the game for a living or simply live the game of football, we have reached the dark ages. For those asking if there is football on Sunday, I hate to be the bearer of bad news. There are no NFL games today or for the next, say seven months.

Perhaps you went on a mission to find yourself in the middle of some Amazonian jungle with a shaman and didn’t have the WiFi password. If that is the case, you might have missed the recent news. Tom Brady and the Tampa Bay Buccaneers knocked off the Kansas City Chiefs 31-9.

Brady captures his seventh Super Bowl ring, and in the process, now has more than any franchise in NFL history. He then celebrated on his boat and drank things stronger than you likely were with your shady spirit guide, who had a one-star rating on Yelp.

What are some important dates to know since there are no more NFL games today?

This is the official start of the 2021 NFL season. While the salary cap will be reduced, the movement won’t slow down. Teams who want to play on the first Sunday in February start that journey with free agency.

Players like Allen Robinson, Chris Godwin, and JuJu Smith-Schuster all hit the open market searching for that elusive trophy and a cool payday along the way.

April 29th through May 1st

Here is where the next NFL stars find out where they will play under the biggest lights. The NFL Draft is when the season truly begins.

Kicking things off are the Jacksonville Jaguars with the first overall selection. It would not surprise me if Urban Meyer already has the card filled out with Trevor Lawrence written down. Arguably the most significant NFL prospect in the game today, the Jaguars hope he can bring them to the promised land.

While it is a year later than we wanted, the NFL will kick off its 2021 season with the annual Hall of Fame game in Canton, Ohio. Facing off are two of the most storied franchises in NFL history. The Pittsburgh Steelers take on the Dallas Cowboys on Thursday night with kickoff set for 8:00 PM ET.

The Terrible Towels will be flying as the Steelers send four members into the Hall of Fame. From the 2020 class, S Troy Polamalu and HC Bill Cowher dawn their golden jacket a year later due to the ceremony’s cancelation in 2020. Joining them will be two inductees from the 2021 Hall of Fame class that was announced last Saturday. Guard Alan Faneca and Bill Nunn, the architect of the 1970s Steelers, make their way into immortality.

This marks the first week when we will see NFL games return, and there is football on a Sunday.

Mark your calendars now, as this is the date of the 2021 regular season’s official start. Knowing that NFL games return today will make it hard to sleep the night before like a kid on Christmas.

The Tampa Bay Buccaneers will open up the season at home against an opponent to be named later. From this week on, there will be football games on TV every Sunday until the week before Super Bowl LVI at SoFi Stadium.