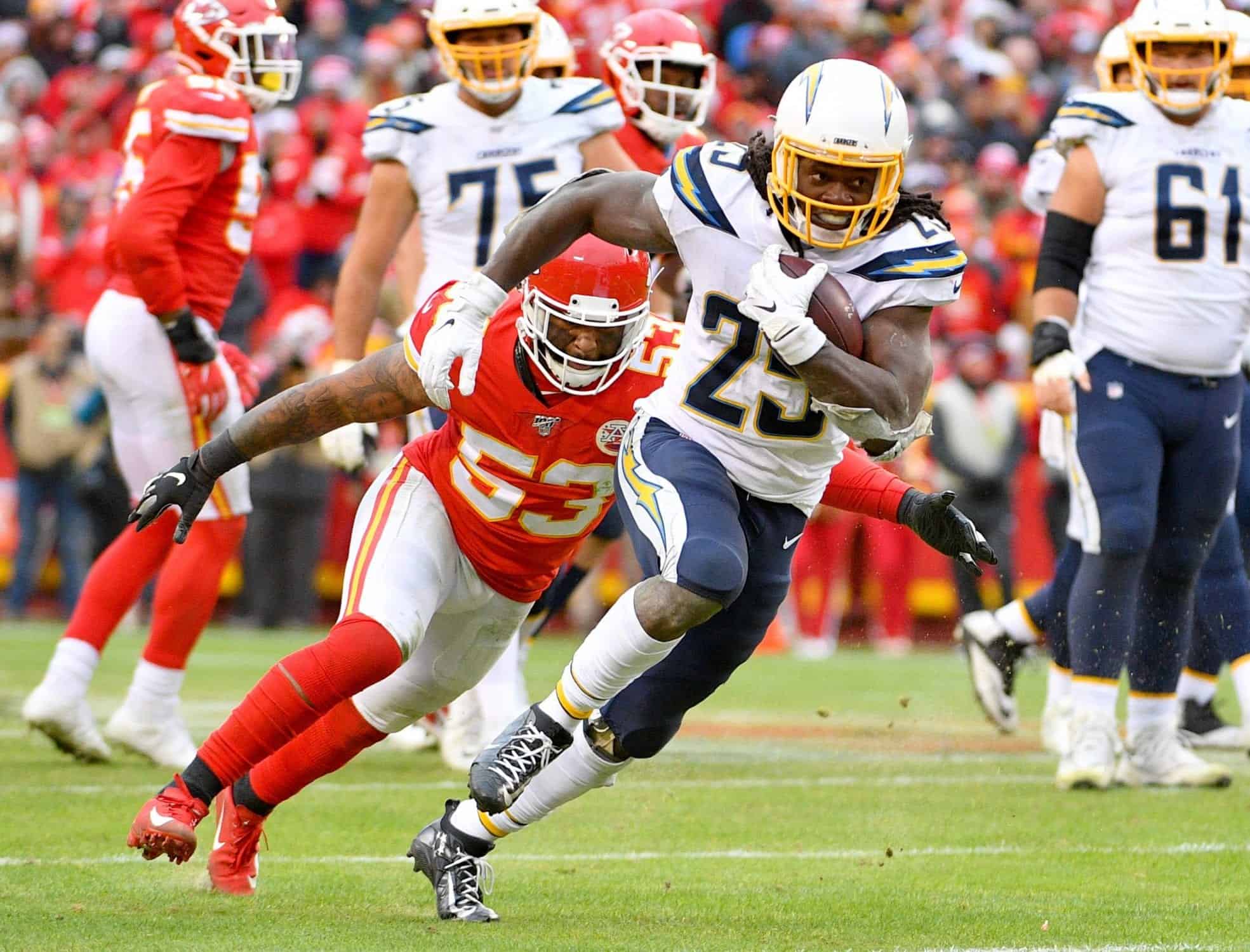 Two days into the official start of the new league year, things have gotten interesting. Seriously, did anyone think Tom Brady would ever really be in a uniform other than New England’s? Did anyone call Todd Gurley getting cut just a year after his mega-deal? Who was that son of a gun that called the Texans trading DeAndre Hopkins?

All jokes aside, the new decade will bring a new style to the league as free agency moves along. Numerous players have found new homes. Some who were considered stars were tossed to the scrap heap to become some other team’s problem. Others were traded for chump change and soon will be paid for the deal they deserve.

At the end of the day, this is the NFL—a melting pot of baffling moves and significant steals for teams that could thrive or implode on themselves. Let’s stop talking as I continue to wonder how I am still working on little to no sleep.

Here are Friday’s NFL free agency winners and losers around the free agent market — make sure to check out our winners from Monday, Tuesday, Wednesday, and Thursday to see where your team ranks.

Are the Atlanta Falcons walking away with a steal? Will the Los Angeles Rams regret their choice to let go of their face of the offense? Those are questions heading into the new year that won’t be answered until December.

No matter how you look at it, though, Todd Gurley is definitely walking away happy.

Less than 24 hours after being released by the Rams, Gurley will return back home to Atlanta on a one-year, 6.5 million deal, according to ESPN’s Jordan Schultz. The Falcons were in the market for a new runner following the release of their former star Devonta Freeman. And before his ultimate release, the Falcons actually inquired about trading for the former Georgia Bulldog but didn’t want to take on the lucrative contract.

It keeps Gurley as one of the league’s three highest-paid running backs.

If healthy, Gurley is a premier runner in any backfield thanks to his mechanics. The 25-year-old is a two-time All-Pro and three-time Pro Bowl runner who led the NFL in rushing twice over the past five seasons. There was a reason Les Snead felt confident that the Rams should have signed him to a four-year, $47.5 million extension right before Super Bowl LIII.

This season, he’ll still earn $7.5 from Los Angeles and play from home. That’s $11 million for a player who could or could not be great.

Forever a part of our history.

Yeah, Gurley’s going to be fine after everything that happened.

Look, criticizing the Texans is my past-time as the team continues to be foolish with moves. Here’s the thing; if you’re going to make sure Deshaun Watson will stick around, you best protect him.

Roderick Johnson isn’t that guy even as a swing tackle.

The team signed Johnson to a new one-year, 1.75 million. Sure, while that will save money, why not spend a little more and bring in a sure-fire player? Seattle’s Germain Ifedi could have filled that role or even moved first-round prospect Tytus Howard inside to solidify the line even more.

Roderick Johnson returns to the #Texans with a one-year deal https://t.co/Eyi83g1Byd via @SOTTexans

Again, coaches are coaches, and general managers make the call. Bill Belichick is a freak, and its why he can make both roles work. They share the same name, but that’s all Bill O’Brien shares with the top coach in the sport.

Melvin Gordon missed the memo last season that running backs aren’t going to get paid top dollar anymore. Still, even after a $10 million per season offer, that wasn’t enough.

At least now Gordon can prove to the Los Angeles Chargers he’s worth every penny twice a season.

The Denver Broncos signed Gordon a two-year, $16 million contract to stay in the AFC West another year. The two-time Pro Bowler will pair together with Phillip Lindsay to form a formidable duo for Drew Lock’s second season. Much like the Cleveland Browns, Denver could use Gordon in a similar role to that of Kareem Hunt to take the pressure off the young quarterback.

No matter how you look at it, Gordon won’t be the lead back anymore – at least not to begin the season out in the Mile High city.

While the Broncos will grab a standout secondary runner, Gordon isn’t going to see as many reps as he would with perhaps another team. Lindsay finished his first two seasons as an undrafted free agent with back-to-back 1,000-yard seasons, adding a pair of extra touchdowns in the latter year. Meanwhile, Gordon has only produced one 1,000-yard season since entering the league back in 2015.

but then chose to give $16M to the 1st-rd RB the Chargers dumped.

Sure, Gordon is getting paid the money he probably thinks he deserves, but at the same time, don’t expect him to be the focal piece of the offense moving forward. He’ll win in the bank account while losing on the field.

I’m pretty sure he’ll accept that for a season out in Denver at that price.

The Dallas Cowboys signed Mike McCarthy to fix the team after the turmoil that resulted from the Jason Garrett era. Naturally, coaches will bring in players who fit their system, so it makes sense that Ha-Ha Clinton-Dix will reconnect with the man who drafted him.

Dallas Cowboys agreed to terms on a one-year, $4 million deal Clinton-Dix, according to the Dallas Morning News’ Calvin Watkins. The Green Bay Packers originally took the Alabama product with the 21st overall pick in the 2014 NFL Draft, helping to turn him into a Pro Bowl caliber player.

There could be issues with Clinton-Dix as a full-time starter should Xavier Woods have a say in it. The team’s free safety started in 15 games and made strides in his second season. Still, for $4 million on another quality deal, Dallas grabs a defender who can help improve coverage in the NFC East.

It’s a win for McCarthy and the Cowboys secondary — even if they don’t know where to play him right now.

Pittsburgh has allowed players to walk this offseason. When they finally did make moves, none of them probably are going to make the team a full-time contender again.

Eric Ebron broke out in 2018 for a 13 touchdown season with Andrew Luck in Indianapolis. Once Luck decided to call it a career, his carriage-like workhorse turned back into a pumpkin as he’d tally three total touchdowns a year ago. He’s headed to the Steel City for $12 million over two years.

Ramon Foster elected to call it a career after 11 seasons and 145 starts. Hoping to find a quality starter, Pittsburgh signed Kansas City offensive lineman Stefen Wisniewski to a two-year deal, per NFL Network’s Tom Pelissero. The 30-year-old will be looking to fill the need along the interior but wasn’t a starter until Week 16 after losing the job last year.

Pittsburgh seemed to settle for players who they could have found younger replacements in the draft. Sure, Ebron might help Ben Roethlisberger and the young receiver corp downfield. But why pay $12 million for that when you could use a third-round pick for that?

Overall, it just seemed like the Steelers missed on players that could have helped their roster and accepted the leftovers.

Well, perhaps the Saints will address other needs. After signing Andrus Peat to a five-year deal that was perhaps a tad much, they could be forgiven following the recent deal for a particular veteran receiver on Friday night.

The Saints reached an agreement with Emmanuel Sanders on a two-year, $16 million deal worth up to $19 million, according to ESPN’s Adam Schefter. The 33-year-old wideout excelled taking over as the San Francisco 49ers top target in a midseason trade. On his way to a Super Bowl appearance, Sanders tallied 502 yards and three scores.

The Saints need a speed threat to pair with Michael Thomas for their offense. The two-time Pro Bowler fits the mold in the slot and will be an upgrade over TreQuan Smith. Plus, the team will likely draft a third option early next month to create a trio that could perhaps never drop a pass in the Bayou.

After AJ Green was franchise tagged, Sanders’s value skyrocketed. For the Saints to bring him down and make him a part of a potential exhilarating offense at $8 million a season, that’s a massive win for Sean Payton and Drew Brees as they have a two year Super Bowl window wide open.