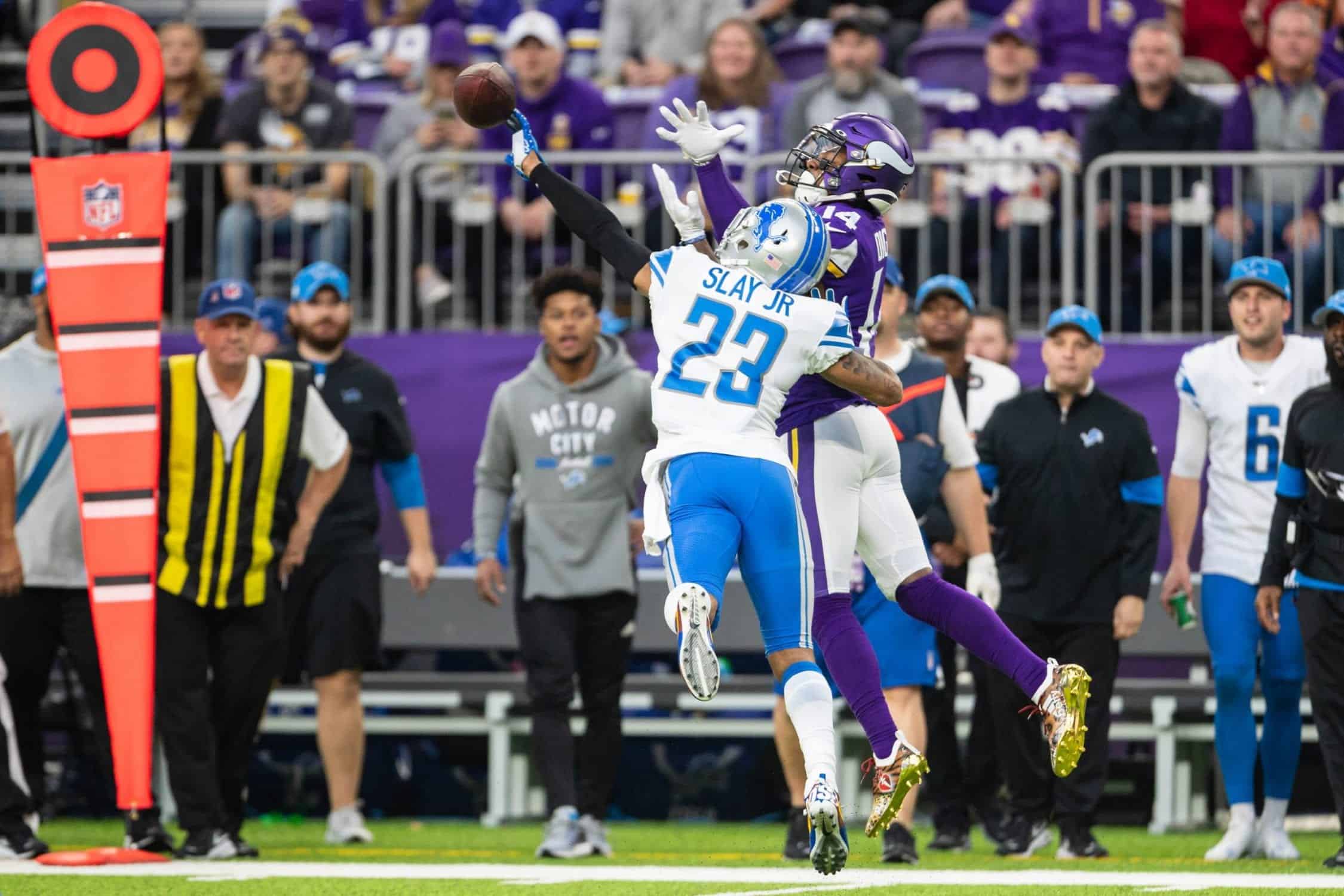 Things have gotten interesting. With day four of the NFL free agent market back in gear, more players are on the move. Some by trade, others by the market and some just because the franchise are done with them. Let’s check out the winners and losers of the fourth day of free agency.

Perhaps the biggest loser of this free agent pool is Byron Jones. On Monday, he became the highest-paid cornerback in NFL history when he inked an $82.5 million deal with the Miami Dolphins.

And that lasted a whole two days before Darius Slay finally got the money he finally deserves. The Philadelphia Eagles will finally have an elite defender and the Lions…well, let’s just say they should be lucky the Chicago Bears continue to make mistakes in their division.

In fact, Green Bay should be the only happy team right now up in the NFC North.

Anyway, here are Thursday’s NFL free agency winners and losers around the free agent market — make sure to check out our winners from Monday, Tuesday and Wednesday to see where your team ranks.

Philadelphia entered the offseason with two major needs that have been a problem for years: wide receiver and cornerback. Thursday morning, they fixed one for their long-term future—and he absolutely deserved what was coming his way.

The Eagles acquired three-time Pro Bowl cornerback Darius Slay from the Detroit Lions in exchange for a third-round (No. 85) and a fifth-round (No. 166) selection come April. Howie Roseman wasted little time to keep Slay with the franchise permanently, extending him to a three-year deal worth $50 million.

The Eagles will look to compete with the Dallas Cowboys once again in 2020 for the extremely winnable NFC East. Slay has been a premier cornerback since joining Detroit back in 2013. Despite Pro Football Focus ranking Slay the No.83 cornerback last season, players around the NFL agree that Slay is one of the best at his craft.

Darius Slay unloads: Says his relationship w/ Matt Patricia was rough & he didn't respect Patricia as a person. Also said Patricia told him he wasn't a leader & that he had no business working out w/ Aqib Talib & Richard Sherman b/c those guys were elite & Slay was "just good."

Now, he will be paid like one. Plus, Philadelphia will keep their first-round pick while picking up one of the top players at his position. This is nearly as great a deal as Arizona got for DeAndre Hopkins.

Yep, it’s been three days and people are still hoping it’s a dream down in Houston.

The Rams are losers for how things ended with Todd Gurley, but there’s a bigger reason than just the fact that they released him. Unfortunately, that’s how things had to go down for Los Angeles to get out of their cap space woes.

For former #Rams RB Todd Gurley, who now aims to prove he's still got it, logical possible destinations include the #Falcons, #Bucs and #Seahawks. pic.twitter.com/ZeXXQibt8S

Gurley, who signed a five-year, $57.5 million extension in 2018, had been dealing with lingering knee injuries since the team’s postseason run the same season. He would see his workload decreased and eventually be viewed as a cap causality due to the lack of production he was expected to have in the coming years.

Perhaps the only silver lining Les Snead can take away after paying $34.5 million to Gurley is he was able to release him before owing him another $10.5 million at the deadline Thursday afternoon.

But hey, it only gets worse Rams fans.

Brandin Cooks name has come up in trade talks. And they don't have a 1st-round pick this year or next year.

Gurley’s rookie deal would have come to an end following the 2019 season if the team had picked up his fifth-year option. If Snead would have waited, perhaps even bringing back the All-Pro runner would have come at a cheaper price. Instead, Los Angeles is without a lead running back, a first-round pick and out over $30 million for a player who suited up for an 857-yard season.

The Cincinnati Bengals certainly were upset when Mike Zimmer was stolen away to Minnesota in 2014. Six years later, they returned the favor by stealing all of the Vikings defensive backs.

Thursday’s signing though was the one that will be effective for the future of the organization.

Per @TomPelissero CB Mackensie Alexander is joining the Bengals on a 1-year, $4m deal

Cornerback Mackensie Alexander will test his skills on a “prove it” deal, joining Trae Waynes in the Bengals jungle on a one-year $4 million contract. The slot corner might be limited inside, but his open field tackling skills will guarantee to make him a weapon for Zac Taylor’s scheme.

The Bengals might have needs on offense, but they’ve made some moves this offseason that could help them out, making them an NFL free agency winner at this stage of the game. Upgrading Darqueze Denard with Alexander and Andrew Billings with DJ Reader, Cincinnati’s defense should be a much improved unit come next year.

But the Alexander deal? That’s a team-friendly contract for a player who will make a ton of plays with his body.

Letting go of Waynes and Xavier Rhodes seemed to be the best move this offseason. With money saved, they could bring back a reliable tackler in Alexander and pair him with Mike Hughes.

So, the Minnesota Vikings:

Extend:
The flawed QB
The Fullback
The Punter
The Kicker

Franchise: Their best DB last year (only to shop him for trade value)

Let walk:
Most of their secondary, half of their D-line

What the hell even is this?

Minnesota will have to replace a ton of top needs on the defensive side of the ball. Every move made was to help give the Vikings a chance to make a run at the postseason. Instead, the defense is now depleted of key players who helped Zimmer make his roster a terrifying unit.

I wrote about top options for the Minnesota Vikings to “replace” Stefon Diggs with their picks in the first 3 rounds of the #NFLDraft @PFN365: https://t.co/pujh0sTLwh

Sometimes it’s the underrated moves that make a team great. Their signing Thursday could be one that comes back as a huge win down the line.

#Cardinals are signing former #Falcons LB De'Vondre Campbell to a 1-year deal worth up to $8.5M, per @AdamSchefter. He finished with a career-high 129 tackles in 2019.

The Cardinals agreed to a one-year, $8.5 million deal with linebacker De’Vondre Campbell. The 26-year-old is coming off another strong season with the Dirty Birds, where he tallied 129 total tackles, two sacks, two interceptions and three forced fumbles.

Campbell is one of those versatile linebackers who can excel in multiple schemes. Working both inside and out, the former fourth-rounder is a sure-fire tackler and has solid coverage skills against tight ends and running backs out of the backfield. A chess piece for Kliff Kingsbury, Campbell should pair nicely with Jordan Hicks up the middle.

Quietly, Arizona has put together a nice offseason—and that was before adding DeAndre Hopkins. Throw Jordan Phillips and Devon Kennard into that front seven and both sides of the ball could have new makeovers that lead to more wins in the now strongest division in the NFL. Cardinals needed to be an NFL free agency winner to keep pace with the 49ers, Seahawks, and Rams — a strong draft will help solidify their status.

Both Todd Gurley and Melvin Gordon will be looking for new homes after being drafted 10th and 15th overall in 2015. Gordon could have agreed to a larger deal last offseason with the Los Angeles Chargers, but elected to hold out. Once he returned, the team had elected to go with Austin Ekeler as the lead runner, significantly hurting his market price heading into free agency.

Gurley couldn’t remain healthy and the team never wanted to risk losing him to a knee injury during the 2019 campaign. Now, both free agents, teams might not want them for the deals they’ll likely look for when it comes to negotiating—especially with the draft coming up next month.

The Dolphins were in the need for a true lead runner. They inked Jordan Howard to a $8 million deal earlier this week. The Falcons have been linked to names such as D’Andre Swift and Cam Akers come draft time. Plus, teams could go for a cheaper route by adding someone like Carlos Hyde or Lamar Miller.

When healthy, both Gordon and Gurley have the ability to play like top 10 runners in the NFL. They won’t be paid like one now heading into the midst of free agency. Running back value is diminishing and teams won’t pay top dollar anymore for someone who could be an injury risk or another player who’s been inconsistent a majority of his career.

(Editor’s note: Todd Gurley has since agreed on terms with the Atlanta Falcons.)

Cleveland will need to make sure their offseason acquisitions transform on the field. For now, they are looking like NFL free agency winners after another productive day adding talent.

Kevin Johnson, who struggled with the Houston Texans, revitalized his career with the Buffalo Bills in a contract year. After a quality season in the slot, he signed a one-year contract worth $3.5 million with incentives that could push the deal all the way up to $6 million. Replacing TJ Carrie, Johnson comes on a good deal and should be a starter inside.

#Browns are getting a great deal here for Kevin Johnson. https://t.co/efSjpfZHIA

The Browns also brought Andrew Billings up north after four years with the Bengals. After posting 35 tackles last year in a contract year, he’ll have a prove-it season with the AFC North rival on a one-year deal. While Larry Ogunjobi and Sheldon Richardson are bonafide starters, one could never have too much depth in the trenches.

Cleveland is making smart moves for their depth and starting lineup heading into the new decade. But we’ve said this before and gave the Browns too much credit. Andrew Berry will be a nice winner this offseason, but he’ll be under scrutiny just as quickly if the team has another 6-10 season.