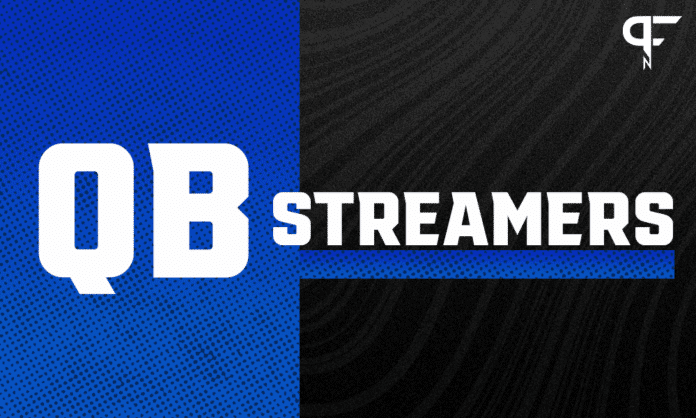 With the start of the 2021 NFL season officially underway, here are our fantasy football streamers and QB tiers for Week 2.

One of the most universal strategies among fantasy football managers is QB streaming. As we quickly approach the Sunday slate of Week 2 of the NFL season, let’s discuss QB tiers and streamers you should have on your radar as you set your lineups.

The general premise of a QB streaming strategy in fantasy is to play the matchup each week rather than riding the entire season with one player at the position. It is all about identifying favorable matchups that week and adding the pertinent QB off waivers.

Without further ado, let’s dive into the QB streamers for Week 2.

For all the offseason commotion surrounding the QB battle between himself and Drew Lock, Bridgewater needed to come and quite the critics. He did just that in Week 1. He completed 28/36 for 264 yards and 2 TDs against the Giants. Bridgewater also added 19 yards on 3 carries which was a nice little bonus. As the QB15 (20.5 points), Bridgewater surpassed the expectations of many in his first game in Denver.

While there is no question the loss of Jerry Jeudy will be felt, the Broncos are one of the few teams who are deep enough at pass catcher to keep ticking. Courtland Sutton is an alpha when at full health. Plus, they have Noah Fant, Tim Patrick, and KJ Hamler to round things out. In Week 2, they take on the Jacksonville Jaguars, who made Tyrod Taylor look like an MVP (21/33 for 291 yards and 2 TDs). The Jags were 29th vs. opposing QBs in 2020 (21.7 ppg) and allowed Taylor to score 23.6 points last week.

I am starting all of Denver’s players in Week 2, including Bridgewater as a QB streamer in leagues that I did not take an early quarterback.

A round of applause for Jones, who looked solid in his first-ever game in the NFL. Jones completed 28/39 for 281 yards and 1 TD against the Dolphins. He kept the ball secure against the team that led the NFL in takeaways (29) last year.

Rookie QBs early in the season are always challenging to trust completely, but Jones looks like a QB ahead of his time. He seems to have an excellent grasp of the playbook — a playbook built to take advantage of his skill. Jones made quick, decisive reads several times and delivered the ball with pace and accuracy in tight windows.

Jones won’t win your week, but he also isn’t going to lose it. When looking for QB streamers, especially in 2QB leagues, that’s all you can ask for sometimes.

I can not believe I am about to say this, but Winston was … efficient in Week 1. He went 14/20 for 148 yards and 5 TDs against the Packers. According to Pro Football Reference, Winston had the fewest passing yards in a 5-passing-touchdown game in NFL history. And to top it off, he did it against one of the best passing defenses in the NFL (No. 5 vs. QBs in 2020 at 16.1 points).

Maybe it’s the Lasik. Maybe it was the elbow surgery he had last offseason. Heck, perhaps those workouts actually are doing something. I don’t know, but in Week 1, Winston looked completely different. Amazingly, his advanced metrics were fantastic. Winston had never averaged more than 7.7 air yards per attempt in his time with the Buccaneers, but in Week 1, it was a staggering 12.4. His yards per attempt (7.4) virtually matched his career average in Tampa Bay (7.7).

Of course, this is a small sample size. But as far as an opening act, things don’t get much better than this. The Saints take on the Carolina Panthers in Week 2, who allowed Zach Wilson to throw for nearly 260 yards with 2 TDs in his first career game. Winston is a high-end QB2 and one of the few high-ceiling QB streamers of Week 2.