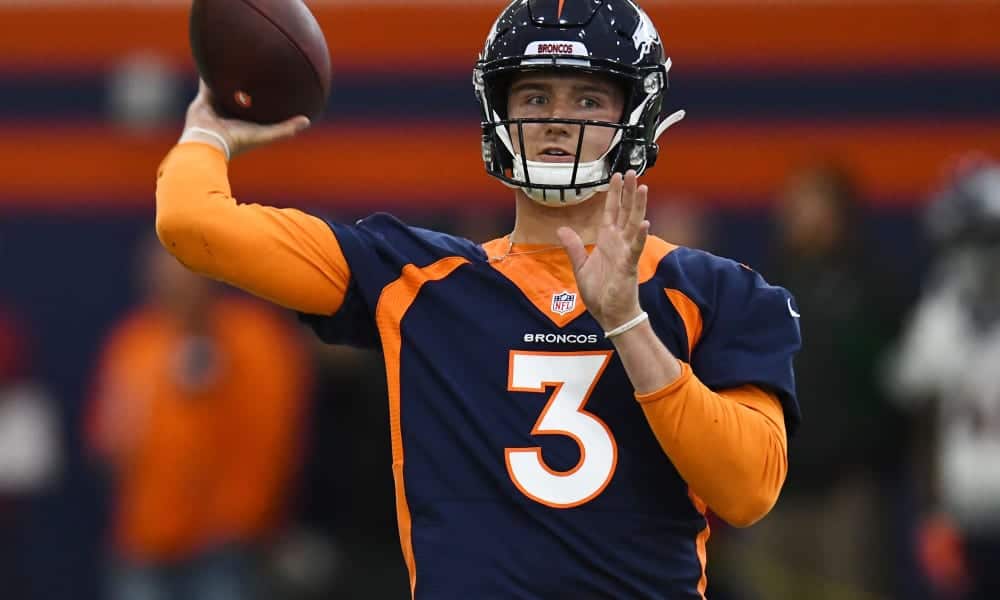 The Week 14 NFL rookies stock report caps off an incredible weekend for football fans. This weekend gave us everything we could want, and then some! It all kicked off on Saturday with Championship Week in college football. We got to see an entire season’s worth of work come down to one pivotal game. The culmination of not only a season but of many players’ careers. The conference champs have been crowned, the bowl games have been set, and now we wait. But the weekend had so much more in store for us!

Sunday gave us show-stopping performances from NFL rookies and veterans alike. We had games come down to the final possession, games decided by controversial calls, and — in the case of the New Orleans Saints against the San Francisco 49ers — a shootout for the ages. It was a great weekend for football, ending with a dud on Monday Night Football, right?

As Lee Corso might say, “Not so fast, my friend!” The Monday Night game gave us more excitement than I think anyone anticipated. NFL’s Week 14 was capped off by great performances by rookies, and an overtime period that teased us with the possibility of a tie. What more could you want from a weekend of football?

The Houston Texans boast one of the most impressive offensive rosters in the NFL. Deshaun Watson is one of the best young quarterbacks in the league. “Nuk” Hopkins is arguably the best wide receiver in the league. Kenny Stills is a very good complementary receiver. Laremy Tunsil is a top-flight left tackle. Meanwhile, the Denver Broncos have been floundering all season and came into Week 14 with an NFL rookie QB making his second start. Easy win for the Texans, right?

Drew Lock and his fellow NFL rookie Noah Fant had other ideas. Lock, a second-round pick and presumably the future of the position for the Broncos, stepped into the role last week in a close win against the Chargers. But he came into his own in the Week 14 match-up. Lock was on fire from start-to-finish, completing over 81% of his passes and throwing nearly as many touchdowns (three) as incompletions (five). Not bad for the rookie’s first road start.

A large portion of that production went to the Broncos rookie tight end Noah Fant. As I’ve mentioned several times in these Stock Report pieces, tight end is a difficult position to make the leap to the NFL. That has certainly been the case for Fant at times, but Sunday was a high point in the season for the former Hawkeye. Fant hauled in four receptions, turning them into 113 yards and a touchdown. An all-around great performance from a pair of NFL rookies in Week 14.

There couldn’t be much more juxtaposition between the Tennessee Titans and the New York Giants. The Titans are one of the hottest teams in the league right now, led by a quarterback making a strong case for NFL Comeback Player of the Year. The Giants are one of the worst teams in football, led by a rookie quarterback who came into tonight injured, paving the way for Eli Manning to make maybe one final start in his career.

Despite the drastically different paths these teams are on, both produced incredible performances from their NFL rookies in Week 14. On one side you had A.J. Brown catching passes from Ryan Tannehill and continuing to look like one of the best young receivers in the game. Brown busted one reception for 91 yards and a touchdown on his way to a total of five receptions, 153 yards, and two touchdowns.

Meanwhile, under the bright lights of Monday Night Football, Giants rookie wide receiver Darius Slayton continued his unlikely breakout season. Not many were high on Slayton coming into this season, but he’s legitimately been one of the best rookies in the NFL — not just at his position, but in the entire league. That surprising performance continued with Eli at the helm, to the tune of five receptions for 154 yards and two touchdowns of his own. A near mirror image of the aforementioned Brown.

Honorable mentions this week go out to Miami Dolphins wide receiver Isaiah Ford and Philadelphia Eagles running back Boston Scott. While neither are technically rookies, neither put up any stats in their actual rookie season, so they might as well be. Both players were thrust into action after injuries, and both performed admirably.

The NFL world has been buzzing all season long about the Baltimore Ravens. They look like one of the most complete teams in the entire league. Star quarterback Lamar Jackson is killing teams with his legs — per usual — and has developed quite well as a passer from his rookie year to his sophomore campaign. Jackson isn’t doing it alone, however. He has a great supporting cast around him, including rookie wide receiver Marquise “Hollywood” Brown.

Brown has had his ups-and-downs this season, which is to be expected from an NFL rookie. Week 14, however, was the lowest valley in Brown’s season. Despite the Ravens coming out of a pivotal match-up with the Buffalo Bills victorious, Brown was anything but. A solid argument could be made that Brown hurt the team rather than helped this week.

Brown came away from the slugfest with the Bills with an abysmal stat line. Only three receptions for -2 yards. Yes, you read that correctly. Negative two yards. It is easily the worst performance of Brown’s season. Is this a sign of things to come? Is Brown hitting the proverbial “rookie wall”? We’ll see in Weeks 15, 16, and 17. If the Ravens are going to make a deep playoff run, they’re going need Brown.

It almost feels as if I’m picking on Cardinals rookie QB Kyler Murray at this point. He’s been mentioned several times in the Stock Down portion of these reports. If his recent tailspin continues, he’s likely to be mentioned a few more times before the season is done.

Murray was my top-rated quarterback in the 2019 NFL Draft, and he has had some strong performances this season. Sunday’s match-up against the Pittsburgh Steelers was not one of them. The past few weeks, Murray has absolutely looked like a (struggling) rookie at the helm. Sunday was one of the worst of them, with Murray accounting for five sacks, three interceptions, and a fumble.

Worse than the stat line was some of Murray’s decision making. Particularly on one drive where the Cardinals should have come away with points. Murray broke from the pocket and could have easily run for a first down. Instead, Murray felt the need to play hero and threw an interception trying to score. Murray will learn, as all rookies must, when to trust his athletic ability, when to make a play with his arm, and when to live to see another down. He’s clearly not quite there yet, though.