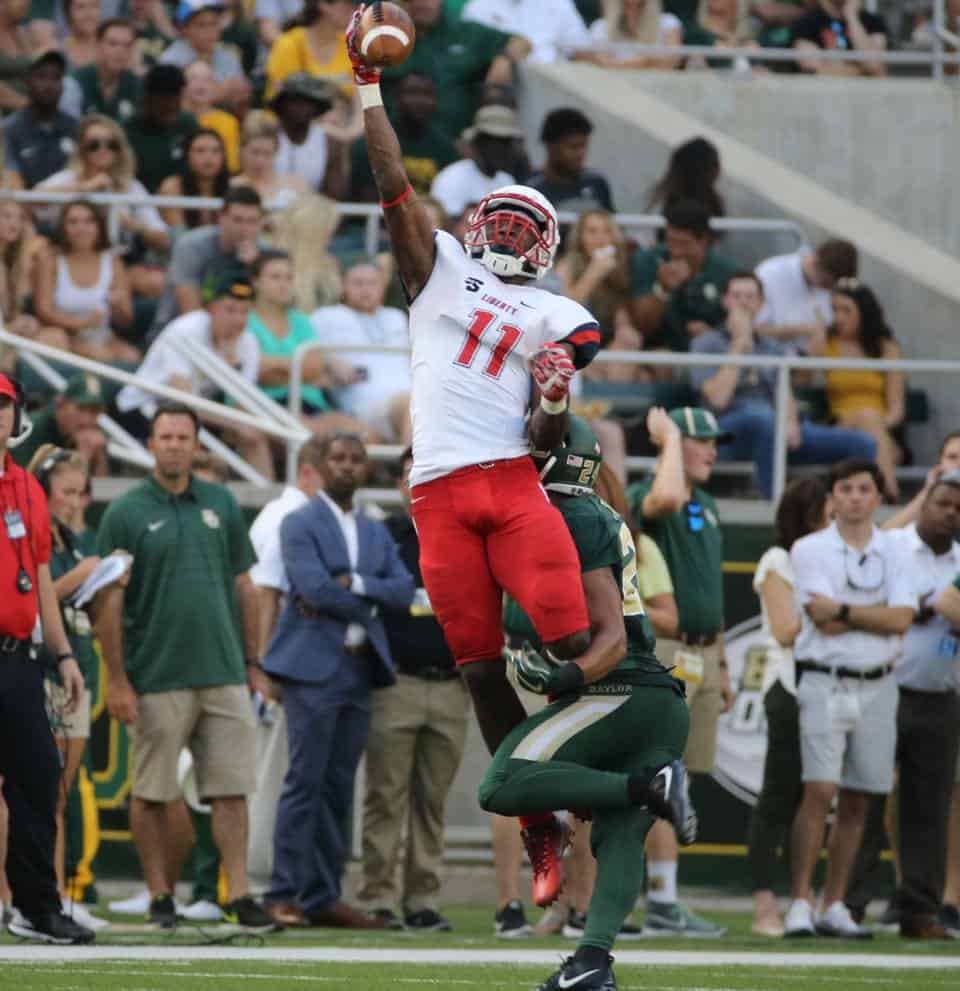 September 2nd, 2017 – McLane Stadium. The Baylor Bears take the field in their home opener – an easy match-up against a lowly FCS squad. Matt Rhule is making his Head Coaching debut. It’s a perfect opportunity to build some confidence before Conference action begins. Everything looks great – until NFL Draft prospect Antonio Gandy-Golden and the Liberty Flames enter the picture.

Stunning Baylor in a 48-45 win, the team plays their hearts out in every facet, with QB Stephen “Buckshot” Calvert and his top wideout Gandy-Golden leading the charge. Connecting in nearly every critical situation, the chemistry the two have is indisputable – and the Bears have no answer to the lethal tandem. Calvert goes on to post a 44/60, 447 yards, 3 touchdown line, with his sophomore target Gandy-Golden accounting for nearly a third of that (13-192-2). The upset of the college football season, the win puts the Flames on the national stage – with a rise to the FBS along with it.

Fast forward roughly two years and Gandy-Golden has continued down the same dominant path he set out for himself during that insane upset. Put on the Biletnikoff award (top CFB WR) watch list for the upcoming season, the Flames wideout is a special player with a special future. Let’s take a brief look through his film to see why.

If you only plugged in a highlight tape and watched Gandy-Golden, you legit might think he’s a Top 10 NFL Draft pick. His catches are THAT impressive – and a large portion has to do with how he’s able to “go up and get the football”. Able to extend his arms to their longest point, he may not have the most extraordinary vertical, but it simply doesn’t matter. He times his jumps at the most opportune moment, and his hands are strong enough that he can fight through nearly every contested situation.

After a slow start to the season Antonio Gandy-Golden has went off against the New Mexico schools in back to back weeks. 7/115/1 #DevyWatch pic.twitter.com/HpNmGuHBVk

Your reminder that Antonio Gandy-Golden is a beast and one of the top WRs in the class. He’s got crazy contested catch ability and stupid good body control. Still like him as much as I did when I first scouted him. #DraftTwitter pic.twitter.com/hLuRtcocQp

There may be nothing more visually satisfying than a nice sideline catch. With Gandy-Golden’s film, you’ll count almost as many tip-toe grabs as Philip Rivers has children. Able to track in the air beautifully, Gandy-Golden’s advanced ball skills allow him to sync his lower body up perfectly with his upper half – leading to some of the more impressive grabs you’ll see. Constantly aware of his surroundings, Gandy-Golden’s spatial awareness is also extremely advanced for a college prospect, and you’ll see him go to open ground on a consistent basis.

Antonio Gandy-Golden has incredible body control for a bigger WR. Liberty has themselves a legit NFL talent. pic.twitter.com/KN04OyIW8t

Antonio Gandy-Golden knows how to catch a football. Can confirm. pic.twitter.com/cLBTVGiom6

Gandy-Golden checks pretty much every box. Physicality, hands, control, ball skills – you name it, he’s got it. Well, except for separation – perhaps the most important trait in a modern receiver. Now that’s not to say he can’t separate – he’s definitely shown he can. But with average speed and a limited route tree, there are times when he struggles to get open – and that’s a definite concern as he approaches the next level.

Struggling to work laterally, Gandy-Golden often rounds his horizontal routes and needs to become crisper and quicker in all facets. There’s a reason he makes so many incredible catches – and it’s often because he makes things harder on him than it needs to be. In many ways, he’s very similar to New England Patriots rookie N’Keal Harry in this way. Ultimately he’s a fine athlete who’s actually shown some nuance, but stuck in a simplistic offence like Liberty’s, he’s developed poor habits. It’s a definite concern.

#DraftTwitter, meet the WR you should know but don't know Antonio Gandy-Golden. A monser 6'4" frame and catcb point monster. He is even a subtly nuanced route runner. Here, a little inside break to sell the slant and then cuts hard to the corner for the fade. Body control too. pic.twitter.com/6GgeEycv78

Speaking of concerns, Gandy-Golden’s competition is sure to spark up plenty of debate amongst evaluators. Even though Liberty moved to the FBS this past season, Gandy-Golden has largely played weak competition, and it’s hard to get an accurate gauge on him as a result. In his two toughest matchups last year (Virginia and Auburn), the receiver was almost completed wiped from the box score, going for 2-38-0 and 3-22-0 lines respectively. Now, there were plenty of reps he won in both those games that don’t show up in the stats, but the concerns are real.

Ultimately, Gandy-Golden is an extremely fun NFL Draft evaluation given his flashy grabs and unreal coordination skills. He isn’t without his faults, but all of the makings of a prime next-level wideout are there. In a stacked receiver class, it will be tricky to set himself apart, but with his “above the rim” style, the Liberty wideout is already doing just that.

Don’t sleep on him like Baylor did back in 2017 – or the consequences may be dire.

Carter Donnick is a writer for PFN covering the NFL Draft. You can follow him @CDonScouting on Twitter. Our PFN All-Access Pass includes exclusive access to our featured sections such as fantasy football, gambling, film room, data lab, and more. Click here to sign up today for only $30/year.