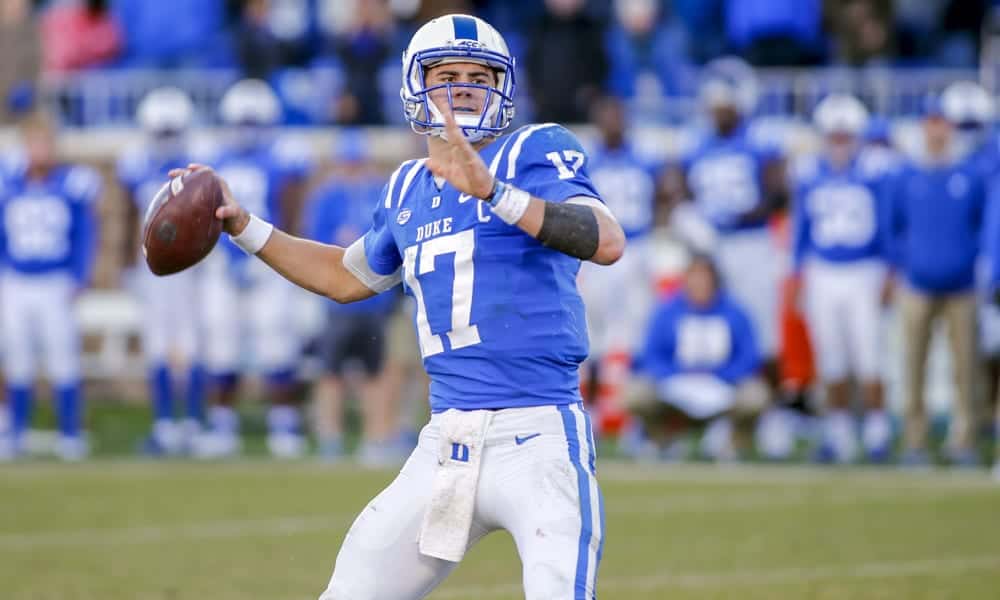 Photo Credit: USA Today
What's in this article? Click to show
The 2019 NFL Draft has been over for almost two weeks now, and teams are now starting rookie minicamp. The New York Giants selected three players in the first round, Daniel Jones, Dexter Lawrence, and Deandre Baker. However, despite this, the Giants’ picks could still be considered as first-round flops.
Daniel Jones
Dexter Lawrence
Deandre Baker
Conclusion

The 2019 NFL Draft has been over for almost two weeks now, and teams are now starting rookie minicamp. The New York Giants selected three players in the first round, Daniel Jones, Dexter Lawrence, and Deandre Baker. However, despite this, the Giants’ picks could still be considered as first-round flops.

Picking Duke quarterback Daniel Jones at 6th overall was one of the drafts biggest shockers. Giants general manager Dave Gettleman defended picking Jones at six by saying Jones would not be there at 17.

Everyone from fans to NFL analysts knows this is not true and could have potentially drafted Jones in the second round. Since the Giants drafted the QB, they passed on Josh Allen and Dwayne Haskins, two players who have franchise potential. The only explainable reason why Jones was selected so high is because of his connections to the Manning family.

Jones has been going to the Manning football camps since he was a kid and David Cutcliffe was his coach. Cutcliffe coached both Peyton and Eli Manning in college, so Gettleman thought it would be smart for him to learn behind Eli in the pros.

The Giants GM also said Jones could sit behind Manning for as long as three years. Due to the fact the Giants could have had a top-four player in the draft in Allen and took Jones over Haskins, makes this pick very questionable.

Pat Shurmur looks like he just found out his dog died. Turns out it’s just Dave Gettleman explaining that Daniel Jones might sit behind Eli Manning for three years. pic.twitter.com/EwPMgei4gr

Dexter Lawrence was the Giants best first-round selection. Even though it was their best pick, it still does not make that much sense. Lawrence is a good player, but he is not a good scheme fit for the Giants.

At Clemson, Lawrence played in a 4-3 system, and the Giants run a 3-4 system. Although Lawrence is big enough to play nose tackle, he will not be that effective at nose tackle. The Giants also have plenty of depth at nose tackle.

That being said, Lawrence will more than likely play as a defensive tackle, the same position he played in college. The reason why he is not a scheme fit with New York is because of the 3-4 system.

Due to this scheme, Lawrence will be double teamed a lot more than when he was at Clemson. He might also have a slow start to the season since he will not only have to adjust to NFL speed and players but to his new role in defense.

The Giants traded back into the first round to draft Baker. A corner was a need since Janoris Jenkins is getting older and the Giants have no one else around him.

Although picking a corner was smart, they might regret drafting Baker over different defensive backs. Talent wise, Baker is a top corner in this draft, but he has some character concerns.

All Giants fans know how the team deals with characters, for example, see what happened to Odell Beckham Jr. People have argued that Baker does not have any character concerns, but if he did not have any, why would that topic even come up?

Drafting Baker was the Giants best draft pick since he is a very talented player. He excels in both man and press coverage and has excellent ball skills. Having a cornerback trio of Baker, Janoris Jenkins and 4th round pick, Julian Love, the Giants could have a scary secondary.

Even though it seems like the Giants has a horrible first round, it will take at least two years to see how this class pans out.

In five years all of us may look back and say “What were the Giants thinking in this draft?”. Despite all of the new decisions that Giants made on draft day, it will be interesting to see how they all pan out.