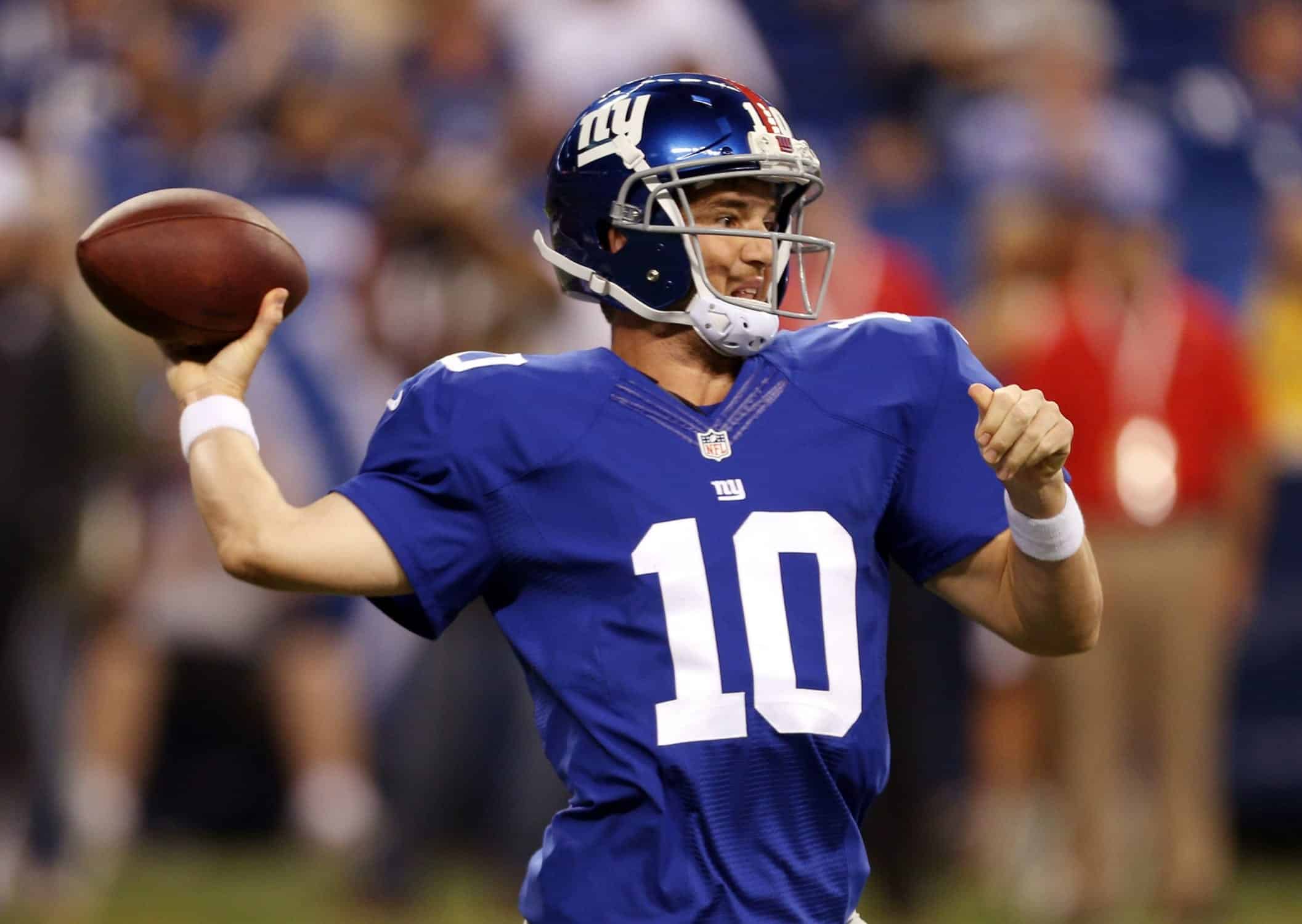 Eli Manning. Credit: USA Today
What's in this article? Click to show
The New York Giants are in an interesting situation. Most people agree that they are rebuilding. And yet, they have refused to move on from quarterback Eli Manning.
Eli Manning’s struggles last season
A rookie quarterback would be in a great situation with the Giants
Examining the Giants skill position players
Saquon Barkley is the ultimate safety valve

The New York Giants are in an interesting situation. Most people agree that they are rebuilding. And yet, they have refused to move on from quarterback Eli Manning.

Unfortunately for the New York Giants, Eli Manning has done little to reward his team for their faith in him. Manning’s history as a Super Bowl-winning quarterback has provided him with a large amount of goodwill from both the Giants and their fans. However, taking an impartial look at his statistics reveals that he is no longer a top-level quarterback.

Many people have suggested that Manning was even worse in 2018 than his statistics would indicate. But even examining the statistics alone are enough to show his regression. In the 2018 season, Manning was ninth in yards (4299), 17th in completion percentage (66%) and touchdowns (21), and was tied for 15th in interceptions (11). In addition, Manning received a poor PFN Offensive Share Metric (OSM) grade of 21.9, which was 26th in the NFL. While these statistics are not the worst in the NFL, they are far from elite.

At best, these numbers portray Manning as mediocre. And at 38 years old, Manning is unlikely to get any better. Even the most ardent Manning supporters should realize that New York must start looking for his replacement sooner rather than later. It would be irresponsible for them to avoid doing so. Fortunately, with the sixth pick in the 2019 NFL Draft, the Giants are in an excellent position to find that quarterback.

Many believe that the best quarterback in the draft class, Kyler Murray, will be selected 1st overall by the Arizona Cardinals. However, New York should have their pick of the remaining prospects. The other four teams ahead of them all appear to have their starting quarterbacks already, so it seems unlikely that any of them will draft a quarterback. This lack of demand means that highly rated prospects like Dwayne Haskins and Drew Lock could be available for the Giants to select.

If the Giants do decide to draft a rookie quarterback, he will be placed into an excellent position to succeed. To start with, Manning is guaranteed to be the team for at least one more year. His presence would allow the young player to sit behind an experienced veteran and learn from them. This extra time would be especially helpful for a quarterback like Haskins, who has limited starting experience. And even rookie quarterbacks with more experience than Haskins are usually not ready to start right away.

Having Manning on the roster would allow the rookie to get accustomed to the level of play in the NFL before he needs to start. It would also give New York time to improve their weak offensive line. Taking too many sacks can easily ruin the development of a young quarterback. Letting Manning play until the offensive line is good enough to protect their future franchise quarterback could be an excellent idea.

The rookie quarterback would also have some potent weapons to work with. Sure, the Giants did trade away star wide receiver Odell Beckham Jr. to the Cleveland Browns in March. But they signed veteran wide receiver Golden Tate in an attempt to replace him. Beckham is the younger, more talented receiver. But this is actually less of a downgrade than you might think.

The two players’ OSM grades support this. Both Beckham and Tate landed roughly in the middle of all wide receivers that were graded. However, Tate’s grade was actually the higher of the two. Tate received a grade of 35, compared to Beckham’s grade of 33. Again, Beckham was still recovering from an injury last season, and he has far more potential than Tate going forward. But in the immediate future, Tate should be an adequate replacement. This is especially true for a rookie quarterback, who might benefit from the presence of a more veteran receiver.

However, the Giant’s best offensive weapon is undeniably running back Saquon Barkley. As a rookie, Barkley was already one of the best players at his position. He was the NFL’s AP Offensive Rookie of the Year, and had the numbers worthy of that award, with 1307 rushing yards and 11 rushing touchdowns, in addition to 721 receiving yards and four receiving touchdowns. He also received an OSM grade of 33, the 10th highest grade of any running back.

As a result of these impressive numbers, Barkley currently holds several Giants rookie records, including most rushing yards, most rushing touchdowns, and most total touchdowns, and also holds the NFL record for most receptions by a rookie running back with 91. However, his most impressive accomplishment may have been that he led the NFL with 2028 yards from scrimmage. He was just the third rookie to reach the 2000 yard milestone. The two other players on that list are current Hall of Famer Eric Dickerson and likely future Hall of Famer Edgerrin James, which puts Barkley in very impressive company.

Whoever is playing quarterback for New York during the next several seasons will be extremely grateful that the Giants selected Barkley 2nd overall in 2018. In many ways, he is a quarterback’s best friend. His ability as a runner can help the offense get into third-and-short situations. And his ability as a receiver gives his quarterback one of the best check down targets in the NFL.

The Giants have been treading water for the last several seasons, holding out hope that Eli Manning might once again lead them to a Super Bowl. However, they currently find themselves in almost the perfect situation to draft their quarterback of the future and allow him to develop into a star. The only question now is whether or not they will take advantage of their good fortune.