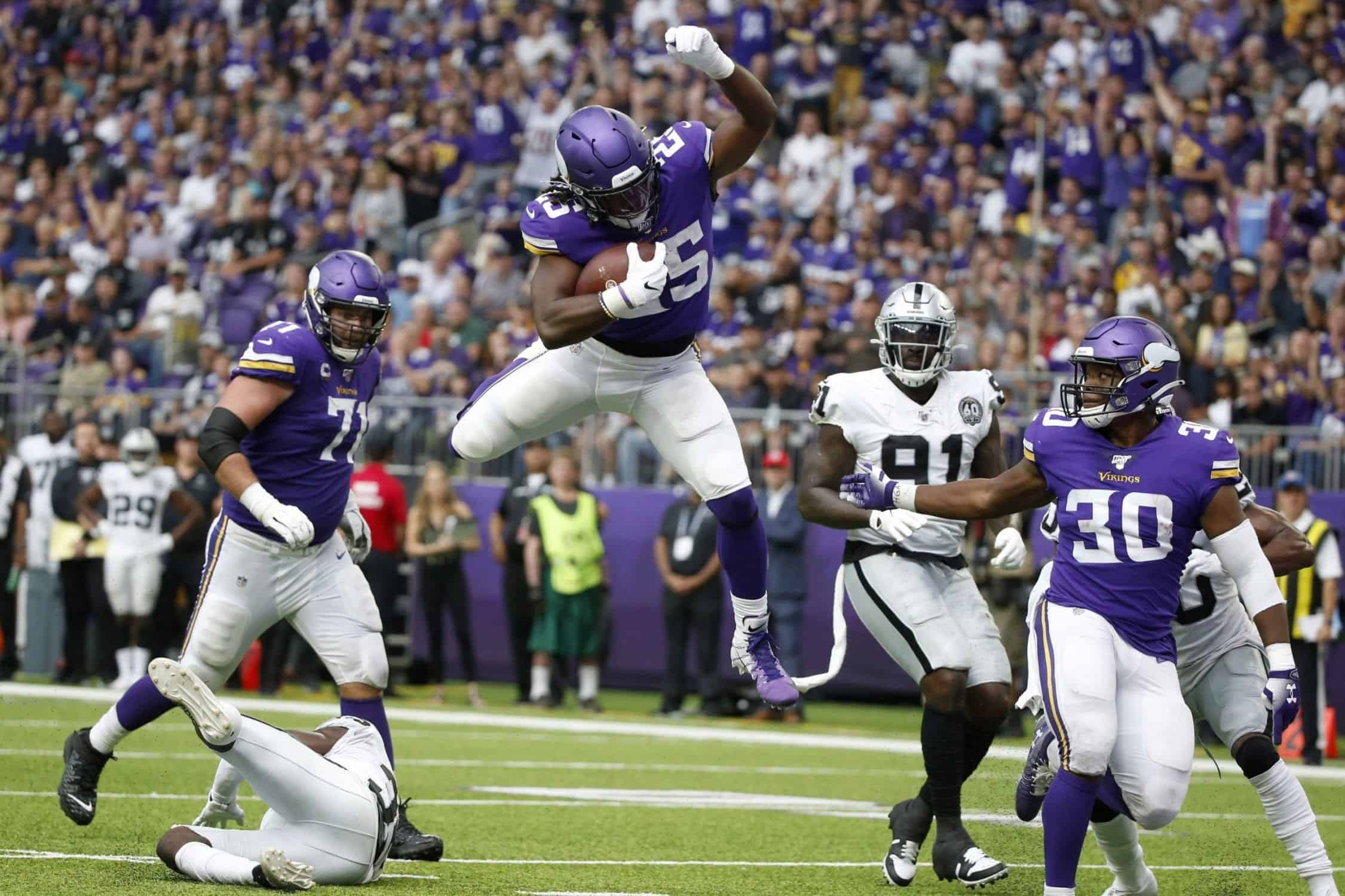 NFL Week 13 has produced some exciting games so far this weekend. We continue our Monday Night Rookies series with tonight’s Monday Night Football prime time meeting of the Minnesota Vikings and the Seattle Seahawks at CenturyLink. Seattle has already made one previous MNF appearance this year in Week 10 and we took an in-depth look at receiver D.K. Metcalf in our series. Today we will focus on Vikings’ rookie running back Alexander Mattison. Mattison has been playing behind Dalvin Cook on the depth chart so far this year but has managed to place himself as RB03 on the PFN OSM ranks for the season.

Alexander Mattison played running back for Boise State during the 2016-2018 seasons where he totaled 582 total attempts for 2,829 yards and 33 touchdowns. He also caught 60 passes for 511 yards and a touchdown over all three seasons. Despite having offseason surgeries on both his shoulder and an ankle, Mattison never missed a single game over the span of his college career. Mattison was awarded the Offensive MVP of the Mountain West Conference Football Championship game in 2018. Alexander Mattison would later be selected during the third round of the 2019 NFL Draft by the Minnesota Vikings as the 102nd overall pick.

Mattison is currently ranked RB03 overall among all NFL teams according to Pro Football Network’s Offensive Share Metrics. The PFN OSM helps us gauge a player’s individual effectiveness in each game that is separate from the performance of their teammates. With a current good overall PFN OSM grade of 21.27, this data tells us that, even though Mattison isn’t getting a heavy workload every week, when the ball is in his hands he is one of the league’s best for creating big plays. RB03 on the PFN OSM charts puts Mattison in really good company. The only two players with grades listed above Mattison today are veteran Latavius Murray and future hall-of-famer Frank Gore.

Because Mattison is listed on the roster as backup to Dalvin Cook, he only has three games on the season that meet the minimum qualifications to be graded for OSM (10 rushing attempts per game, 60 attempts through Week 12). Mattison’s Week 6 showing against the Philadelphia Eagles resulted in a near-elite OSM grade of 38.37 that left him on top of the charts that week as RB01 in the league.

According to NFL’s Next Gen Stats, Mattison is ranked 12th in the League for average yards per rush attempt for the 2019 regular season and is currently averaging 4.8 yards per attempt. And speaking of Mattison’s rushing attempts, those yards haven’t come easy. Mattison has had 8+ defenders in the box against him in 36.59% of all his attempts. This is the fourth highest 8+D% in the league all year.

For a player’s AVG yardage, Next Gen will focus on the average number of yards that he is able to pickup per attempt. Mattison has been able to use his speed, patience, and athletic abilities to put up several high-yardage runs like the example in the following clip. This is a 35-yard run from NFL Week 6 against the Philadelphia Eagles. Notice Mattison’s hesitation that allows a gap in the defense to open up. He is able to easily navigate his defenders and finishes the run with an impressive hurdle to tack on a few more yards at the end before being pushed out of bounds.

But what may be even more notable is that Mattison is able to put up such superb stats while being one of the NFL’s highest defended running backs per attempt. Next Gen calculates how many defenders are stacked in the box at snap. Specifically, they are looking for how often a rusher sees eight or more defenders in the box against them: this is the RB’s 8+D%. The following clip from NFL Week 8 against the Washington Redskins. Watch how Washington brings eight defenders forward expecting the run but Mattison is still able to find the gap and drag three separate defenders at the end of the play to extend the run even further.

For tonight’s game, the Vikings’ offense is still without Adam Thielen fully healthy. The Vikings could use the extra hands against Russell Wilson and the Seahawks defense and should get Mattison more involved than he was in Week 12.

Alexander Mattison has proven to be a very productive running back so far this season on the field as Dalvin Cook’s backup. Putting up some very respectable numbers on the 82 attempts he’s had thus far, head coach Mike Zimmer may feel more confident in giving Mattison a heavier workload over the next four weeks if they choose to rest Cook in preparation for the upcoming playoff games. And heading up against defenses of the Detroit Lions, LA Chargers, and Green Bay Packers over the next several weeks, expect Alexander Mattison to add to his stout list of OSM grades before the end of the regular season if that were the case.

Remember to check back here every Monday morning to take a look at our latest Monday Night Rookie. Next week we will feature a player from the Monday Night Football matchup of the New York Giants at the Philadelphia Eagles. Do you have a favorite Giants or Eagles rookie that you would like to be featured? Join in on the conversation on Facebook or let us know on Twitter.