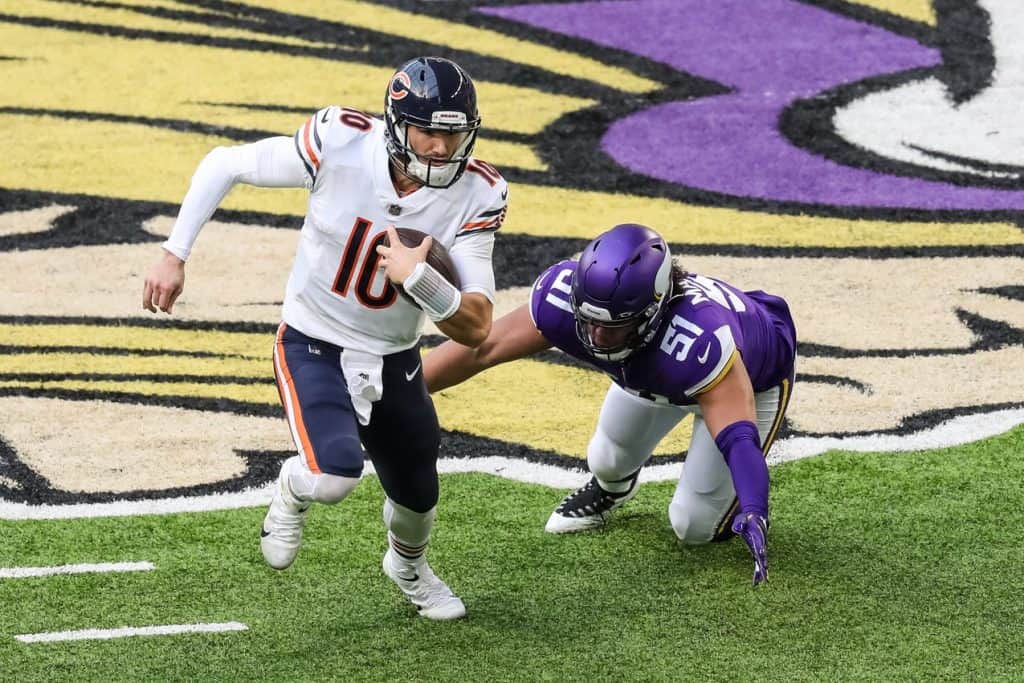 With it clear the Chicago Bears are set to move on from Mitch Trubisky following Andy Dalton’s signing, what are the latest NFL rumors surrounding Trubisky? Will we see Trubisky sign today, and if so, where could we see him playing in 2021?

Update: ESPN’s Adam Schefter reported that Mitch Trubisky will be signing with the Buffalo Bills.

While there were initial rumors that Mitch Trubisky could be a candidate for the Washington Football Team, those rumors died down after adding Ryan Fitzpatrick early in free agency. Therefore, where are the potential remaining landing spots for Trubisky?

The Atlanta Falcons have yet to commit to a backup for Matt Ryan in 2021. While all the rumors point towards the Falcons taking a QB high in the 2021 NFL Draft, Mitch Trubisky could provide the Falcons with a veteran option. Thus, if Ryan were to go down with an injury early, the Falcons would not have to push their rookie into action immediately.

The fit for Trubisky here is that his play style is somewhat similar to that of Ryan Tannehill. He is a QB capable of playing well off of play-action and can use his legs to extend plays. Given that Arthur Smith has come over from the Titans, a player of that mold would make a lot of sense.

Another place that could be looking for a backup QB who can use his legs is the Arizona Cardinals. Trubisky did not use his legs much over the last two seasons, but was reasonably effective at times when doing so in 2018. As such, the Cardinals may decide to bring in Trubisky as a young backup for Murray in 2021.

Along similar lines to the situation with the Cardinals, the Bills could be a potential destination. Mitch Trubisky is not a player in the same mold as Josh Allen, but he can use his legs when he needs to. Therefore, Trubisky may make sense as an upside investment for the Bills as their backup.

There are rumors that the Jaguars are set to trade Gardner Minshew, which would put them in the frame as a potential destination for Mitch Trubisky. Trubisky could be the potential veteran backup to Trevor Lawrence when he comes into the league. The Jaguars may prefer to go for a player with more experience in the league. On the other hand, Trubisky does present upside as a backup.

The San Francisco 49ers appear to be committed to Jimmy Garoppolo. However, given that none of Garoppolo’s money is guaranteed, they could decide to release him ahead of the season. Still, bringing in a player like Trubisky, who would not cost much in terms of salary cap, can come in and compete with Garoppolo.

The Titans do not have a settled backup situation. Given the earlier comparison in play style between Trubisky and Tannehill, this combination would make a lot of sense. Tannehill could act as a veteran mentor to Trubisky as he looks to rebuild his NFL career. It was not so long ago that Tannehill was facing the potential end of his NFL career. If anyone can advise Trubisky on how to turn things around, it would be Tannehill.

What is Mitch Trubisky’s market value?

The backup quarterback market is always fascinating. We can often see backups being paid huge amounts of money, despite underwhelming careers. Trubisky has had one of those underwhelming careers, especially in the past two seasons. However, there may be a team willing to take the chance they can get the best of Trubisky.

Spotrac currently has Mitch Trubisky valued at $8.3 million per year on a two-year deal — they compare it to the deals signed by Marcus Mariota and Jacoby Brissett. Both Jameis Winston and Blake Bortles had to play for close to the veteran minimum as backups in recent years. Trubisky could end up having to take a reduced contract in the hope he gets the chance to prove himself. “Prove-it” deals seem to be the flavor of this free agency period, and Trubisky may fall under that umbrella as well.