Mike McDaniel is already proving he can call plays at the NFL level. How did he set up the Dolphins go-ahead TD drive vs. the Bills in Week 3?

The NFL is a matchup league. When your team employs Tyreek Hill and Jaylen Waddle, matchups will forever be in your favor. Rules have changed to make speed and agility the main focus instead of physicality. It’s nearly impossible to play defensive back in the NFL because league rules have made it illegal to be a menace to a receiver.

And while defenses are evolving, there are weak spots in every defense unless a team can simply line up and dominate with man coverage. The Buffalo Bills might have defended the Miami Dolphins differently in Week 3 if they had a healthy Jordan Poyer and Micah Hyde.

But Dolphins head coach Mike McDaniel dialed up an outstanding go-ahead drive, and the confidence he’s instilled in Tua Tagovailoa led to the Dolphins’ victory.

Want the ad-free version of articles like this? Sign up for PFN Pass and get an ad-free experience, plus plenty of other exclusive content throughout the year.

How Mike McDaniel set up the go-ahead TD drive

Miami scored on a six-play, 72-yard drive that lasted 4:04 on the game clock. The Dolphins split the drive up evenly, throwing three times and rushing three more. There were two more passes thrown, but the plays were negated by penalties (one offensive, one defensive.)

Buffalo took an interesting approach to defend the Miami passing attack, particularly against the jet motion, which the Dolphins use often. Most defenses will extend their outside cornerback out and leverage them outside whoever the No. 1 receiver is to their side.

Miami uses condensed formations at a high rate, and they love to attack the middle of the field with crossing routes. So, Buffalo practically dared the Dolphins to attack them toward the numbers and sideline.

The Bills are running a zone coverage, but the defensive backs match receivers inside their zone responsibilities instead of playing space.

The three deep defenders, who are now the two cornerbacks and the middle safety, are working together to distribute the routes between one another in their Cover 3 responsibilities. The corners are responsible for anything vertical and outside. This makes sense because their half-turn takes their momentum vertically anyways.

The safety will pick up any in-breaking route the CBs communicate to him, like in the video above. He’s in a better position to break to the line of scrimmage on stopping routes as well.

How, exactly, does Buffalo expect to contend against a “Smash” concept like this? Respecting Hill’s speed is one thing, but this is outrageous. Hill runs a curl here that he stems away from the breaking safety, leaving himself an opening the size of Rhode Island to receive the pass in.

Miami gained more yards (77) on Tua’s two big completions to Waddle than they did on the drive (72). While Waddle’s third-down conversion wasn’t based on the jet motion spin to Cover 3, it did play off the look Buffalo gave Miami multiple times when they remained static pre-snap.

McDaniel saved the “smash” concept for an outstanding time. The jet motion causes Buffalo to spin late into Cover 3. Buffalo’s tendency to play the half-turn while leveraging practically straight over the top of the receivers finally came back to bite them.

The safety shoots to the flat, which leaves the cornerback on an island against Waddle on any out-breaking route. If Buffalo played this with the corner leveraged to the outside, maybe Ja’Marcus Ingram would have stood a chance speed-turning to the corner route.

Waddle does a nice job stemming this route into the college hash mark, forcing the cornerback further inside. But Ingram overcommits and ends up leveraged inside of Waddle as he gets back vertically.

How did Buffalo allow the Dolphins’ 45-yard completion on 3rd-and-22? Not having Jordan Poyer and Micah Hyde was a factor. There’s a good chance Tua doesn’t fit that throw in the window with their range and experience on the back end. But they weren’t there.

McDaniel probably didn’t call this play specifically for the Tampa-2 call. He most likely called this for the coverage Miami had seen more often in static looks, which was a soft quarters coverage. However, the call worked out even better for them against the Cover 2 variant.

If it had been quarters, the backside safety is probably aligned farther inside, and Tua probably never uncorks this pass. But because they’re playing Tampa-2, the safety was responsible for the corner route run by Hill, which kept him close to the numbers.

Meanwhile, Waddle simply proved just how difficult it is to defend someone with speed, agility, and a bit of route running prowess.

This play looks like “Bunch RT Nasty Y CTR 24 DBL Money F Search” to the bunch side. Waddle is also condensed to the formation in the video, but he’s obviously not running what the Shanahan system calls the “money” route, although the “cop” route he ends up running was money in its own right. 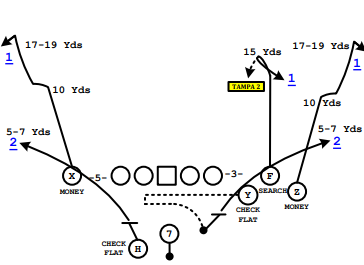 Tua deserves his flowers for this throw as well. He’s far more confident in the offense and the protection in 2022 than he ever has been as a pro, and he’s hitting downfield opportunities at a higher rate than any QB through three weeks. This ball was perfect, and it set up Chase Edmonds’ touchdown to take a 21-19 lead, and ultimately, the victory.

Jerry Jones Was Right: The Philadelphia Eagles’ Window Is Now