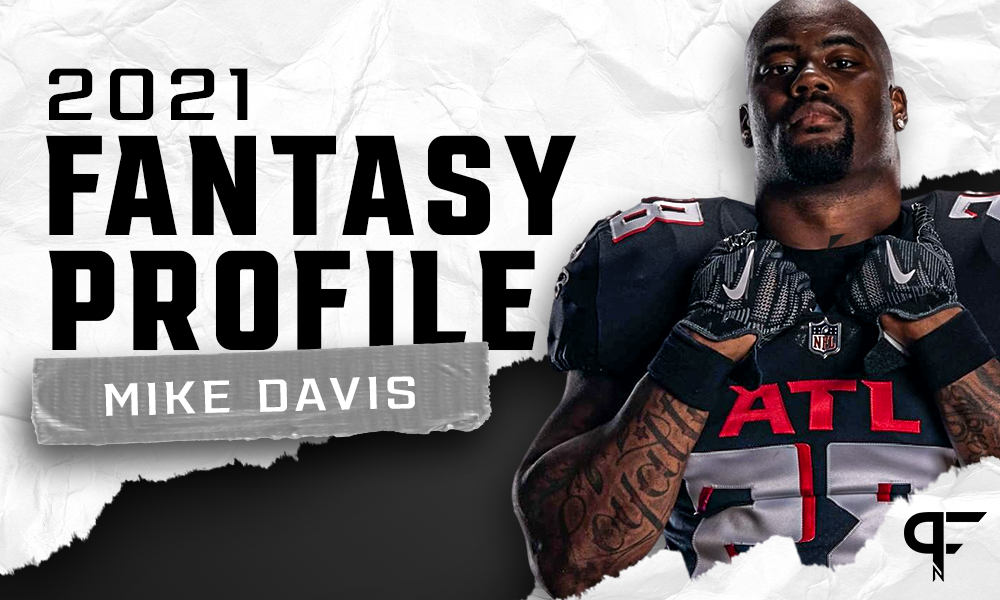 Mike Davis is the fantasy football RB very few are talking about -- his outlook suggests workhorse volume and a value in drafts at his ADP.

Atlanta Falcons running back Mike Davis was the 2020 fantasy football waiver wire pickup of the year. Panthers running back Christian McCaffrey had an injury-riddled season, and Davis filled in admirably. Does Davis’ fantasy outlook suggest more success will continue with the Falcons in 2021, and what is his current ADP?

The veteran running back ended the year in a disappointing manner for fantasy managers. Still, Davis finished the season as the RB12 in PPR formats. He rushed for a career-high 642 yards and 6 touchdowns, with 59 receptions for 373 receiving yards and 2 more scores through the air.

According to Pro Football Reference, Davis was the most efficient running back with an average of 8 rushing attempts per broken tackle. Furthermore, he saw the fifth-most targets (70) among running backs in 2020. Davis proved that he could handle a large opportunity share. The Falcons RB demonstrated that he has the strength to break tackles when running inside and the speed to bounce outside.

The Falcons wasted no time and wooed Davis away from Carolina during NFL free agency to fill the void in their backfield. The signing of former Pro Bowl running back Todd Gurley did not end well for Atlanta.

The 28-year-old running back is projected to open the season as the starter — Ito Smith, Javian Hawkins, Qadree Ollison, and Tony Brooks-James fill out Atlanta’s backfield.

Davis signed a two-year, $5.5 million contract that includes $3 million fully guaranteed to return to his hometown. He’s prepared all offseason for the role. A viral photo of Davis working out on the Falcons’ practice field made fans go into a frenzy. He’s in an optimal position to receive the largest opportunity share of his career with new head coach Arthur Smith.

A new coaching regime in Atlanta

Smith was previously the offensive coordinator of the Titans. Last year, Tennessee’s offense averaged 385.4 total yards per game, which ranked fifth in the NFL. While the Titans ranked second in rushing attempts per game (32), they came in at 30th in pass attempts per game (30). Tennessee leaned heavily on play-action passes and pre-snap motion last year.

It is worth mentioning that running back Derrick Henry averaged 24 opportunities, 125.3 total yards, and 20.6 PPR fantasy points per game. The foundation is there for Davis to have the best statistical season of his career.

Additionally, the Falcons have receivers Calvin Ridley and Russell Gage, and they used the No. 4 selection on dynamic tight end Kyle Pitts out of Florida.

Atlanta will go into the 2021 season with the offensive line as a red flag. The most significant loss was center Alex Mack (who signed with the 49ers in free agency). The Falcons also lost left guard James Carpenter. That’s the bad news. The good news is that Atlanta’s offensive line could become a strength next season. The Falcons have several promising young offensive linemen that will have an opportunity to step up.

Davis projects for around 270 opportunities, 1,200 total yards, and 8 total touchdowns in 2021. He provides you with a low-end RB2 floor and a high-end RB2 ceiling in PPR formats.

Davis is readily available near the end of the fifth round of fantasy drafts when you review redraft ADP data from Fleaflicker. He’s an even better value in pay-to-play fantasy formats such as the National Fantasy Championship, where he has an ADP of 66.28 as the RB26 overall. Meanwhile, his ADP in half PPR formats on Sleeper is 66.4.

Davis is one of my favorite values in fantasy drafts. He’s a solid RB2 for your team. Davis has little competition for touches and provides you with RB1 upside in what should be an improved Falcons offense.