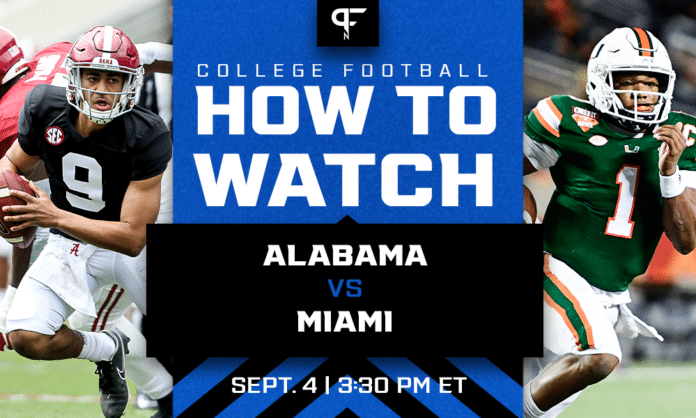 How to watch Miami vs. Alabama in Week 1 | Live streams, TV channel, start time, and more

Watching Miami vs. Alabama could be the highlight of the weekend, especially if Miami can find a way to upset the Crimson Tide.

Anytime Alabama’s featured in a Week 1 tilt at a neutral site, it’s must-watch television. Miami vs. Alabama isn’t the matchup it could be, but the Canes are working on getting there thanks to head coach Manny Diaz. A healthy Miami quarterback plays a significant role in determining the outcome, but even that might not be enough. Let’s take a look at how to watch this Week 1 matchup and break down what to expect from both sides.

How can you watch this week’s matchup between the Hurricanes and the Crimson Tide, and what time is it on?

Nick Saban reloads with yet another talented roster, though some positions will be younger than expected. Bryce Young takes over the offense without much game experience, supported by similarly inexperienced running backs and wide receivers.

RB Brian Robinson and WR John Metchie III will lead their respective positions, but will they have chemistry with Young? The true sophomore signal-caller put on a show with a few other underclassmen in the spring game, but Week 1 brings a different challenge.

Miami’s success in 2021 relies on the health of QB D’Eriq King‘s knee. The super senior tore his ACL in the Hurricanes’ bowl game last year and now faces the toughest challenge of his football career. His mobility opens up a different realm of possibilities for offensive coordinator Rhett Lashlee and the offense, and it comes down to his receivers getting separation.

Though Alabama rolls out new skill-position players and a new offensive coordinator, stopping the Tide isn’t easy. There’s a reason Saban has a dynasty, and it’s not usually because they take their time to get rolling during the season. Plus, Alabama’s defense is loaded with NFL talent that will make life difficult for Miami.

Miami vs. Alabama features several enticing matchups on both sides of the ball. Alabama linebacker Christian Harris is one of four studs at the position and will most likely spy King to limit the damage he can do running the football.

If King can move the ball with his arm, his receivers create enough separation, and Miami’s defense can make the Tide look inexperienced offensively, they have a chance. That’s a ton of ifs, though.