By Lucas Ellinas
April 5, 2021
What's in this article? Click to show
Fuller is a great player, but the Dolphins need to give Tua more weapons
Miami’s pass-catchers’ box score statistics were underwhelming in 2020
The Dolphins’ pass catchers had some of the worst advanced metrics last season
Miami needs to address this problem in the draft
Want more NFL news and analysis?

The Miami Dolphins made a huge splash in free agency by signing Will Fuller. On the other hand, their receiving corps was one of the worst in the NFL last season by multiple standards. If Miami wants Tua Tagovailoa to succeed in his second season, Fuller’s signing isn’t enough to fix the problem. The Dolphins will need to add more pass catchers in the upcoming NFL Draft.

Fuller is a great player, but the Dolphins need to give Tua more weapons

I recently wrote an entire article about Fuller, so I won’t spend too much time on him here. Suffice it to say that Fuller is an excellent addition to the Miami receiving room. However, for several reasons, his signing isn’t nearly enough to fix the problems the Dolphins had with their pass catchers last season.

The first issue is Fuller’s health. He has missed at least one game in every season of his career. That trend is guaranteed to continue next season, as he is suspended for Week 1, and I don’t think anyone would be surprised if an injury caused him to miss additional games.

Of course, most teams can survive a couple of games without their top wide receiver. But the Dolphins’ pass catchers proved last season that they cannot carry the load by themselves. Statistically speaking, they were among the worst groups in the NFL. Miami does not want to be in a situation where they need to rely on them, even for a short period of time.

You don’t need to look far to find evidence of the Dolphins’ pass-catchers’ struggles last season. Their most productive member of the group was DeVante Parker, who totaled just 793 yards and 4 touchdowns. Those are decent statistics, but not what you would expect from a team’s No. 1 receiver.

Behind Parker was tight end Mike Gesicki, who had easily the best season relative to his position (TE), managing 703 yards and 6 touchdowns. After Gesicki, though, the production falls off significantly. Next up on the list was running back Myles Gaskin, with 388 yards.

Those are solid numbers for a running back, but it is generally not a good sign if a running back is out-producing most of your pass catchers through the air. In total, the team’s next three leading pass catchers, Jakeem Grant, Preston Williams, and Isaiah Ford, combined for an unimpressive 937 yards and 5 touchdowns.

As mediocre as their box score statistics look, Miami’s receiving corps’ advanced metrics are even worse. The advanced metric in question is the Offensive Value Metric (OVM), a grading system created by the (Bx) Movement to measure players based on the amount of value they provided to their respective offenses. In the case of the Dolphins’ pass catchers, their grades were underwhelming across the board.

The highest-graded member of the group was Ford, with a grade of 30.68. That ranked 56th out of 98 qualifying wide receivers, meaning Miami’s most valuable pass catcher ranked in the bottom half of the NFL at his position. In fact, if you look at the highest-graded member of every NFL team’s receiving groups, Ford’s grade was the lowest. In other words, the Dolphins had the least valuable most valuable pass catcher last season.

Following closely behind Ford were Grant and Parker, with grades of 30.34 and 29.13, respectively. After that was Gesicki with the worst grade of the bunch (26.75), ranking fifth-lowest among tight ends. Notably absent here is Williams, who didn’t earn a grade due to suffering a season-ending injury for the second year in a row. However, his 2019 grade of 26.38 ranked dead last among wide receivers that season, so it seems unlikely that he would have done much better this season.

In short, while none of the Dolphins’ pass catchers were the worst at their positions, every single one of them was below average, often by a significant margin. So, not only were their traditional statistics poor, they also provided little value to Miami’s offense.

Given their low OVM grades, it should come as no surprise that Miami’s receiving conglomerate struggled on the advanced metrics behind those grades. The table below shows how Parker, Gesicki, Grant, and Ford performed on the following statistics:

The most obvious problem is in the separation numbers. Parker’s 1.7 yards of separation tied for dead last among all wide receivers and tight ends from last season. Gesicki’s total ranked third from the bottom. Put simply, neither of the Dolphins’ two most productive pass catchers could get open at all.

Meanwhile, none of these players caught more than two-thirds of their targets, and they all struggled to make things happen after the catch as well. Grant is the lone exception, as his 4.8 yards after the catch (1.2 yards higher than expected) ranks above average.

On the whole, though, those are some genuinely abysmal statistics. Miami’s pass catchers did almost nothing to make their quarterback’s jobs easier. They couldn’t get open, couldn’t consistently make contested catches, and didn’t create extra yards after the catch. In other words, they did none of the things that wide receivers and tight ends are supposed to be good at.

Examining the weekly grades of the Dolphins’ pass catchers

Stepping away from season-long averages and looking at weekly grades doesn’t make Miami’s receiving corps look much better. The charts below show the weekly OVM grades for Parker, Williams, and Gesicki from last season, represented by the black dots. For comparison, the league average at their positions is represented by the yellow lines. 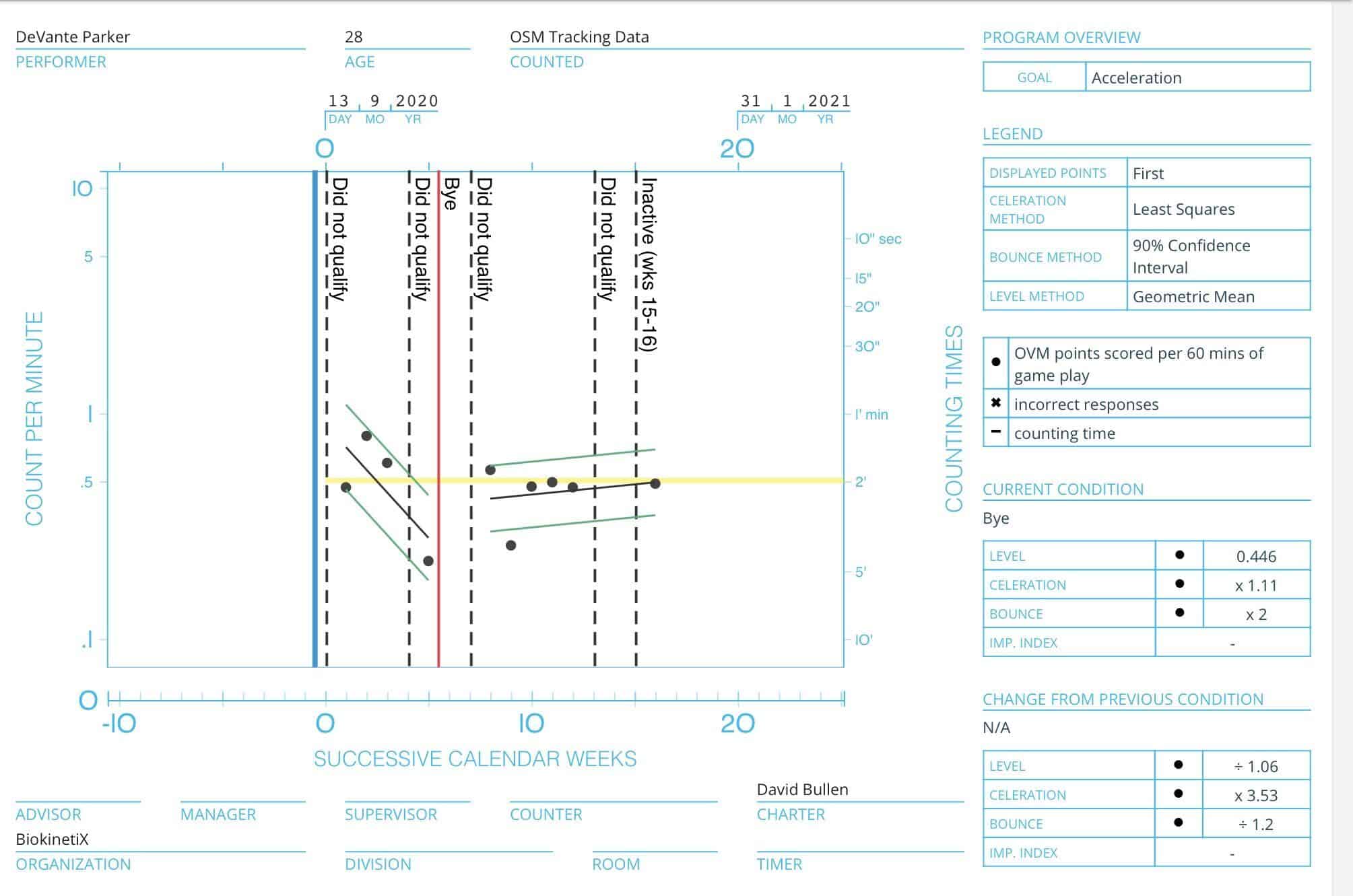 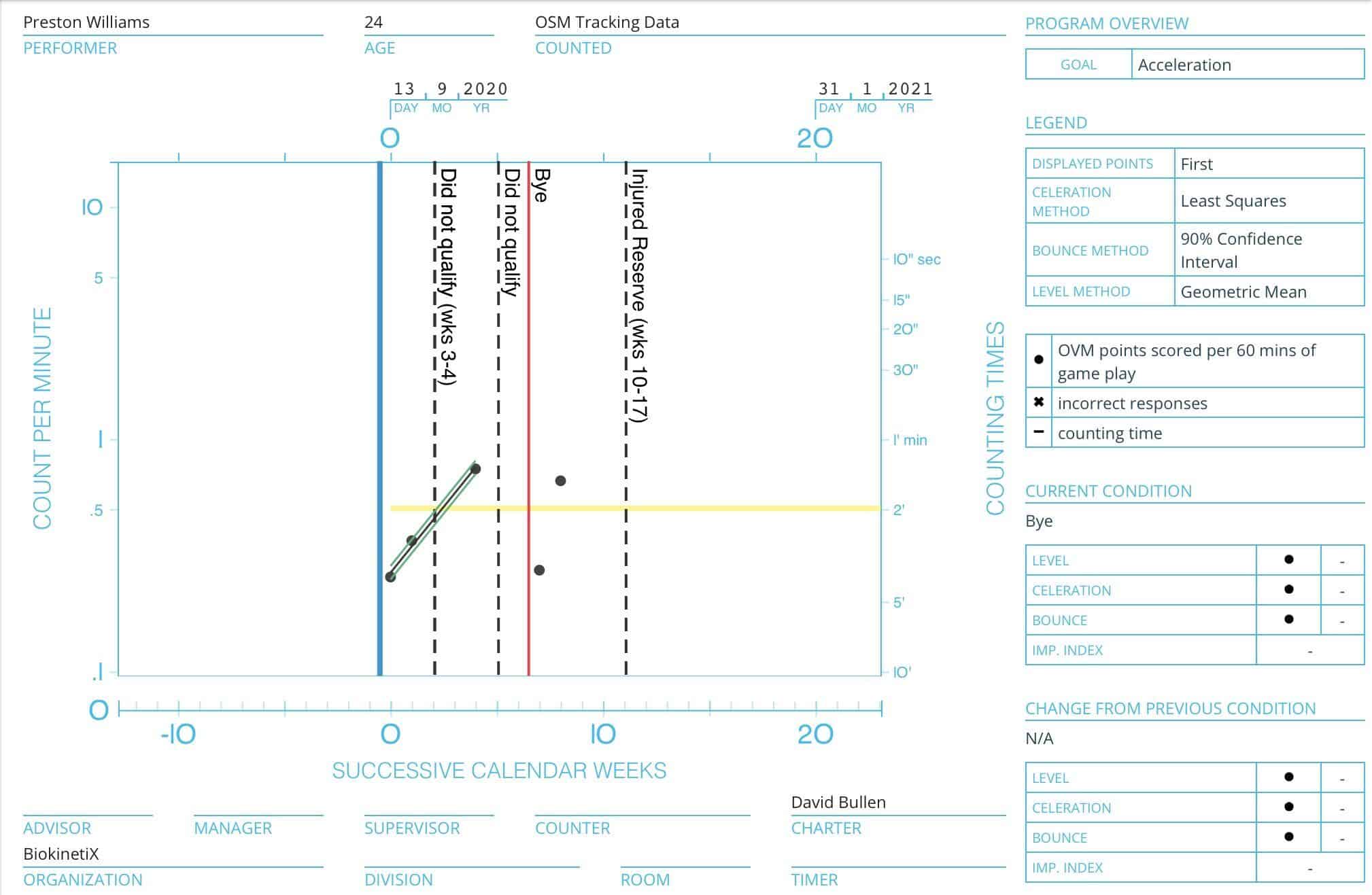 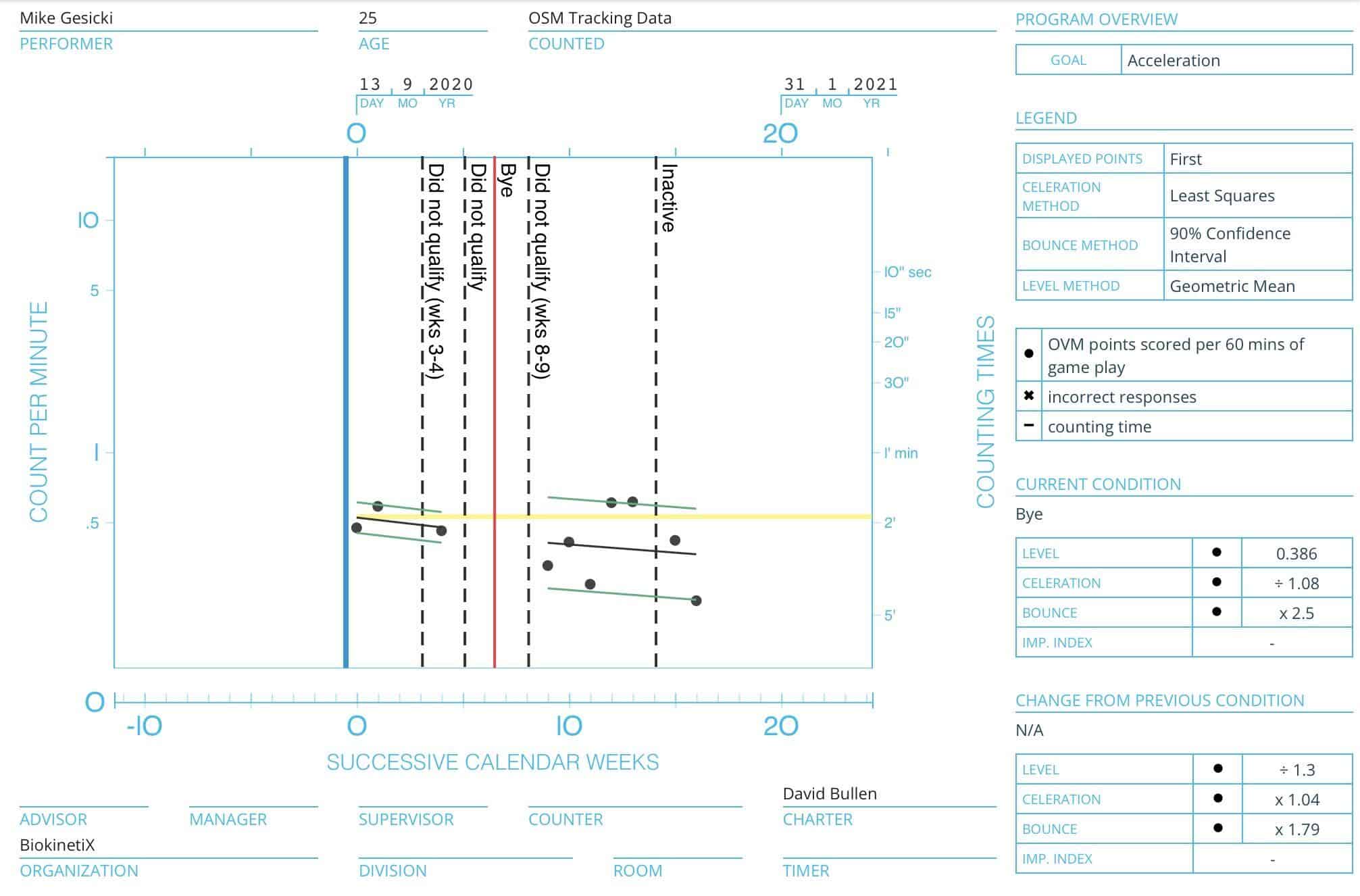 As you can see, all three of them were inconsistent. They each had games that were above the league average but often produced at a level well below that standard. It doesn’t help that, in the cases of Parker and Williams, they missed games due to injury. While Miami’s newest addition, Fuller, is often injured, he generally plays at a high level when healthy. To be both injury-prone and inconsistent is a far more concerning combination.

Miami needs to address this problem in the draft

Looking back at the 2020 season, it is somewhat astounding that Miami won 10 games with their skill position players contributing as little to the offense as they did. It is perhaps even more surprising that both of the Dolphins quarterbacks performed fairly well at different points in the season. Now, with Ryan Fitzpatrick gone, it’s up to Tua to carry the load.

Doing so will be substantially easier if Miami improves their receiving talent from last season. Adding Fuller is a big step in the right direction, and the return of Albert Wilson, who sat out last season, should help as well. However, the group performed so poorly last season that those changes won’t be enough.

Were it up to me, I would invest Miami’s first pick in the first round of the upcoming NFL Draft on one of the draft’s elite wide receivers (or Kyle Pitts) and then take another on Day 2, and maybe another later in the draft as well, just to be safe.

Whatever the team decides to do, though, the statistics show that they cannot afford to leave the draft without using their many picks to bolster their receiving corps.

Sources: Deion Sanders could be Florida State’s next head coach

College football picks and predictions against the spread for Week 3