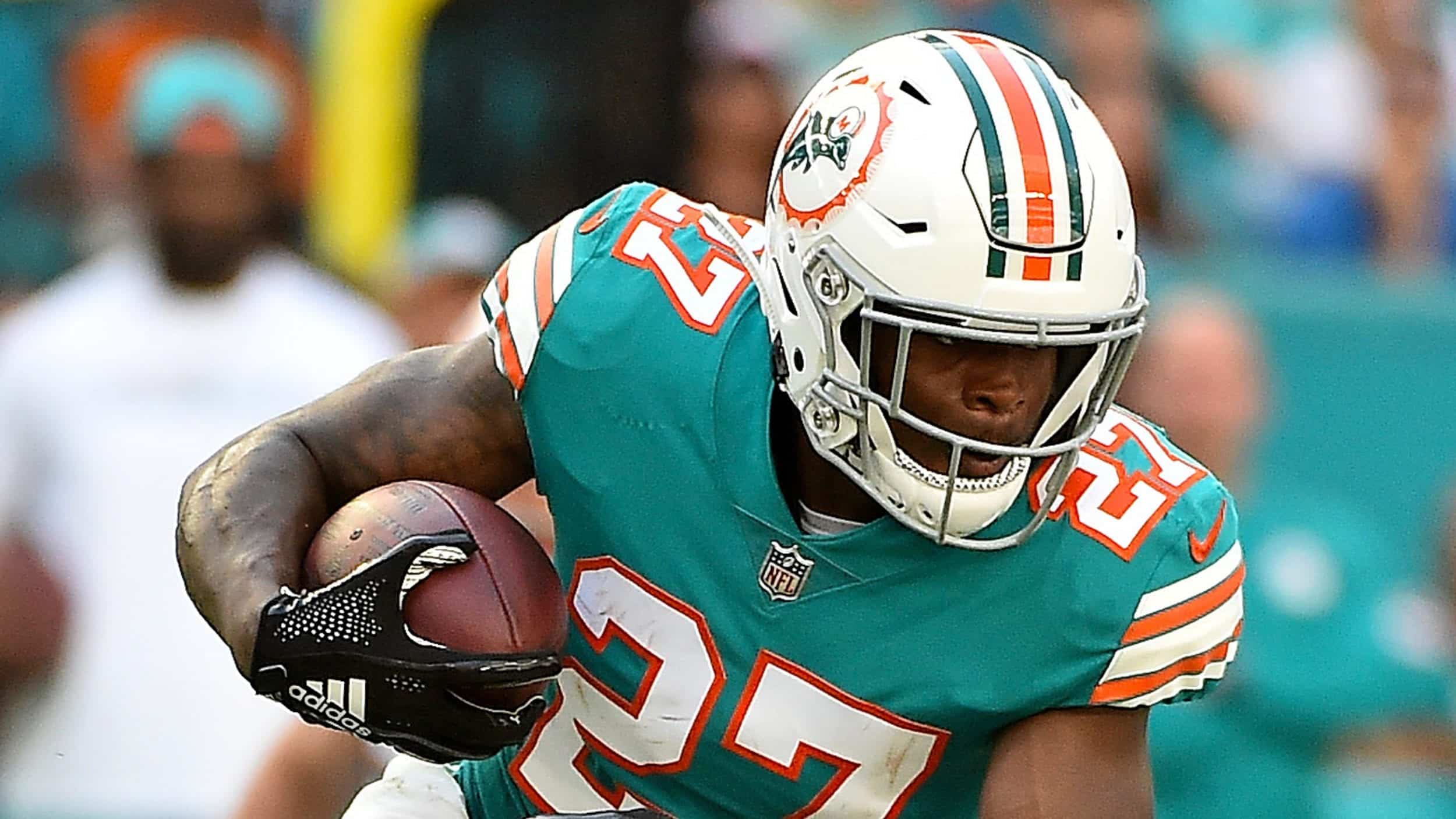 Photo Credit: USA Today Sports
What's in this article? Click to show
The Limitations of Ballage in Dolphins backfield
The Upside of Ballage
Final Thoughts

Preseason injuries can change the dynamic of a whole team and position room in a matter of seconds. For the Miami Dolphins, that exact thing occurred when Kenyan Drake went down with a foot injury that could see him miss regular-season time. Thus, Kalen Ballage stepped into the equation as the potential lead back for Miami heading into the 2019 season. What can Dolphins fans and fantasy football owners expect from the second year ball carrier?

An increase in minutes for Ballage is a good and bad thing in many ways. Ballage’s game can be defined as a mixed bag, with some excellent traits that should drive his value up and others that will limit his overall ceiling.

The main question here is if Ballage is a threat to Drake‘s starting role in the backfield? After watching the tape, the answer to that question becomes rather clear.

The Limitations of Ballage in Dolphins backfield

Ballage’s game is a double-edged sword, but there are four main concerns with Ballage’s game — contact balance, vision, quickness, and footwork. This play illustrates a few of those concerns.

The Miami Dolphins run duo here and Ballage has to read through the double teams. That is how this works. The play-side double team is the first read on this run, but they do not win and the A gap gets filled by the crashing ILB. This backside double, however, does win with the guard climbing to the second level.

Ballage is a big back, and he has long, ranging strides. What he is going to have to learn to do is to be quicker on his feet. His heavy feet here drag him too far in towards the center and allow him to get clipped by the defensive tackle, who makes a good play. Ballage lacks the lateral quickness to make this cut, and his heavy footwork draws him too far into the line. This isn’t an easy play to make, but it shows limitations in his ceiling.

His vision is sketchy at best. This is an inside zone, and Ballage is dead set on the A gap. He follows his blockers up through there and disregards a wide-open cut back lane in the B gap.

Once the linebacker and safety came down to fill that hole Ballage should have been looking to cut. The H-Back can not even get on a block due to Ballage’s antsy footwork to hit the hole right away. He should show some patience to allow the H-Back to get a ‘hat on a hat.’ However, Ballage has substantial leg churn and power, allowing him to grind out every bit of a six-yard gain on this play.

Below is a classic inverted veer with Ballage. Here he showcases that good burst that he showed off so often at Arizona State as he rushes right into the open hole. However, Ballage goes down on the first contact all too often.

He needs to be able to break through these arm tackles, and by doing so, he can then use his power to start grinding out yards.

The Upside of Ballage

If two things resonate on Ballage’s film, it is his straight-line athleticism and receiving ability. He is excellent in both departments, and it certainly gives him sneaky big-play ability. At 6’2″ and 231 pounds, Ballage’s 4.46 speed gives him a great combination of size and speed that shows up on film.

The receiving ability for Ballage is rather natural. He makes a great adjustment on this ball to reel it in. It is a body catch, but no one was even around Ballage, and for a running back, an adjustment like that is impressive. I wish he did more after the catch, but the lack of contact balance and lateral quickness sap a lot of what he can do after the catch laterally. Still, this is a good, natural catch.

Here is where we get talking about straight line athleticism. Although Ballage has no one around him, he gets down this sideline in a hurry. His straight-line speed is impressive.

This is a natural catch away from his body. Furthermore, something I appreciate is how he uses his built up momentum to lower his shoulder and try and get some extra yards at the end of the play instead of merely going out of bounds. This is the main appeal of his game.

Ballage has a lot of limitations that fantasy players and Dolphins fans alike need to be worried about. I genuinely believe that Ballage is best suited as a complementary back to someone like Drake, and as such, I do not think that he will overtake Drake as the main back in Miami. Drake is more dynamic and has better vision.

However, fantasy-wise, that does not mean Ballage should be discarded. His straight-line athleticism and receiving ability will see him get a substantial amount of snaps, and in PPR leagues he should take higher precedence as an excellent pick with the expected production in the receiving game that he should get.

So, while Ballage has his limitations, his game is a good fit for the modern NFL. With Kenyan Drake’s injury, there’s definite fantasy upside for the second-year Dolphins running back.

Nick Farabaugh is a Film Room writer for Pro Football Network. You can follow him on Twitter @FarabaughFB.