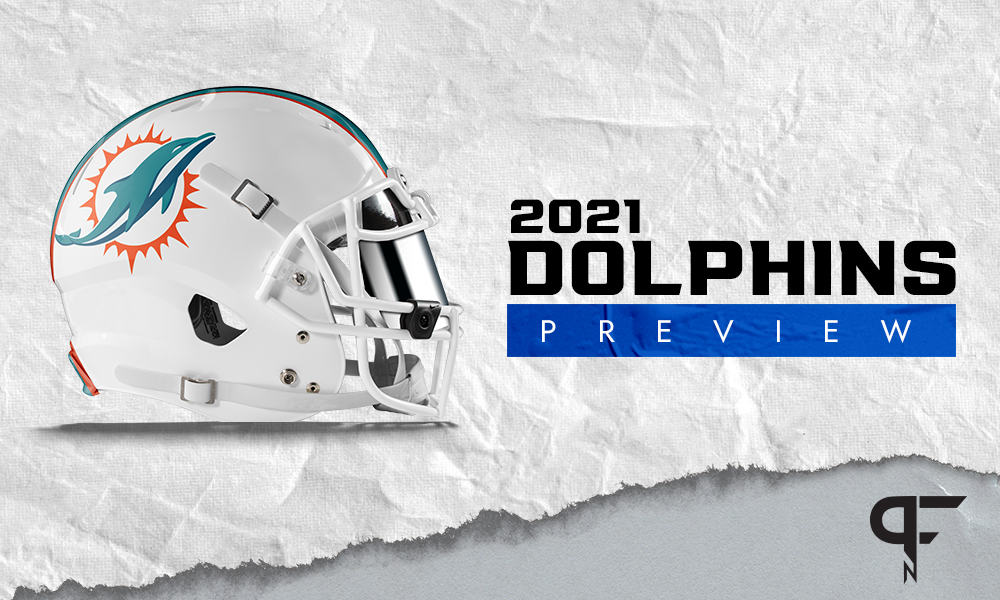 The Miami Dolphins have some lofty expectations for their 2021 season preview. They’ve really turned the roster over in the past few years with the draft picks they received from the Laremy Tunsil trade. They drafted Tua Tagovailoa in the first round of the 2020 NFL Draft, and expectations remain high for him after an underwhelming and far from 100% rookie season from a health standpoint. Can the Dolphins live up to their fans’ lofty expectations?

The Dolphins lost three big offensive contributors this offseason. Center Ted Karras and quarterback Ryan Fitzpatrick left in free agency, and Miami traded offensive lineman Ereck Flowers. However, they replaced Karras with veteran center Matt Skura. He’s not an upgrade from Karras, but he brings a veteran presence to the middle of the offensive line. Flowers has been a fine lineman since sliding inside to guard, but he heads back to D.C. to play for Washington.

The addition of Jacoby Brissett brings a legitimate insurance policy to the Dolphins should Tua Tagovailoa go down with an injury. He’s a solid veteran backup who can steer the ship while the captain is off the wheel.

The biggest addition to the team was former first-round pick Will Fuller. When healthy, which has admittedly been rare, he’s been incredibly productive. He’s averaged over 9 yards per target over the past three seasons. But Fuller has also, unfortunately, missed 19 games in those three years. His catch rate hovered around 70% over the past few seasons. That’s impressive, considering his aDOT is deep.

The Dolphins 2021 NFL Draft started hot and stayed hot in the first two days. Jaylen Waddle was the most electric offensive weapon in the draft. Waddle is not just a better route runner than he’s given credit for — he’s an actual route runner. He also averaged 24 yards per punt return in 2019 and scored a touchdown on one of his five kick returns. Get him the ball, and good things happen.

Jaelan Phillips was the best pass rusher in this class. His blend of top-tier athleticism and pass-rush plan should have Dolphins fans drooling as we preview their 2021 season. As long as he remains healthy, he should be a nice contributor, even early.

Jevon Holland was the 36th overall pick in the NFL Draft for Miami. Holland provides a versatile defensive weapon that can play both in the slot and on the back end as a traditional safety. Liam Eichenberg went just a few picks later and could be an option at either tackle spot as a rookie for Miami.

Hunter Long felt surprising initially, but this is the last year on Mike Gesicki’s contract. Long isn’t the athletic freak Gesicki is, but he is a reliable receiver who can play both inline or detached. Larnel Coleman and Gerrid Doaks provide some depth at offensive tackle and running back, respectively.

Where do Miami players rank in PFN’s Top 100?

Which Dolphins’ players rank in the PFN Top 100 and where do they fall?

Jones was one of the most consistent man-coverage cornerbacks in the NFL before arriving in Miami. He’s never had the ball production of some other top cornerbacks, but he’s been consistently underrated throughout his career. He’s long and fluid with great explosiveness and route recognition to remain in a receiver’s hip pocket.

Howard is one of those big-play cornerbacks spoken of above. His 2020 campaign was DPOY worthy, and he played well when healthy in 2018. His 20 passes defensed and 10 interceptions in 2020 were both league highs, and Howard was much more consistent in coverage in 2020. He still allows some big plays due to his aggressive nature, but it’s a tradeoff for the turnover production.

Head coach Brian Flores is quickly asserting himself as a force to be reckoned with in the NFL. 2020 was far from a solid roster, and yet the second-year coach led the team to a 10-6 record despite cycling between quarterbacks, lacking legitimate receiving weapons, a running back, or an offensive line. The Dolphins have slowly been building their roster.

Defensive coordinator Josh Boyer joined Flores in Miami as the cornerbacks’ coach. The Dolphins elevated him to DC in 2020. The defensive talent continues to improve, so realistically so should the results.

A lot of the offensive success in 2021 will come down to the improvements made by Tua. There won’t be any excuses this year if he underperforms. The second-year quarterback must play more consistently this season. The weapons improved dramatically in the offseason, so the offense overall should follow suit.

The Dolphins’ defense should remain impressive. They were a top-10 team in defensive efficiency last year, thanks to the sixth-best pass defense in the league.

With the Dolphins’ strength of schedule, they could easily win anywhere from 8-11 games. 10-7 may seem like a stagnant season from 2020, but that would compete for a playoff spot and probably means Tua played well enough to feel good about his future.