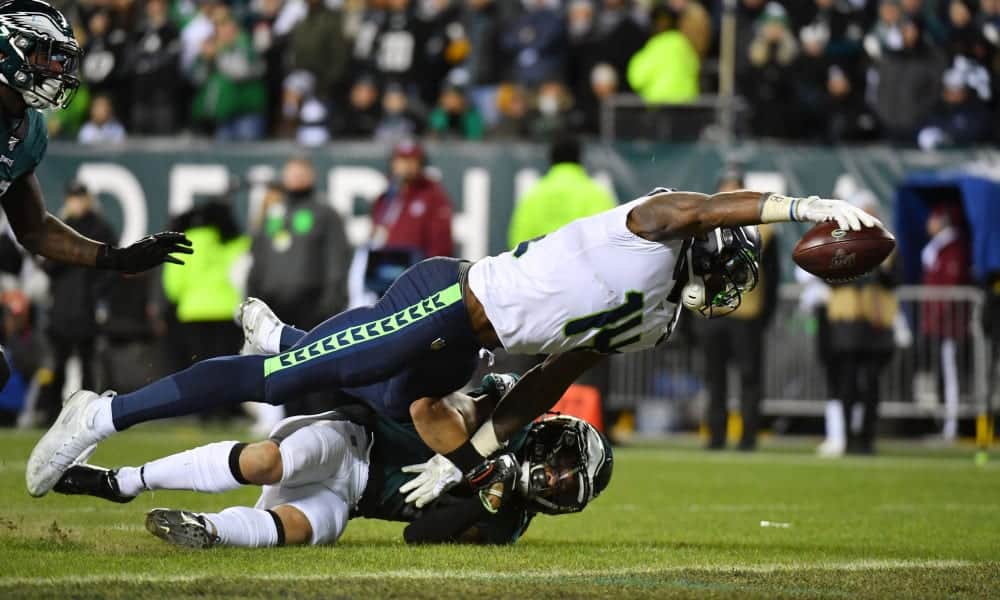 Wild Card weekend treated fans to a fantastic slate of play featuring two overtime games and generally low scoring all around. One major highlight of the weekend was the Seattle Seahawks 17-9 road win over the Philadelphia Eagles. Seattle came into the game with some questions on offense and there was some discussion as to which team had the upper hand. However, the defense stood firm, and the offense was treated to a flashy performance from D.K. Metcalf’s playoff debut.

According to Pro Football Network’s Offensive Share Metric, Metcalf earned an OSM grade of 38.9, ranking him fourth among wide receivers in the Wild Card round. With that strong performance, he has now led the Seahawks in receiving in four of their past six games going back to Week 13 of the 2019 regular season. With a long road ahead to the Super Bowl, Seattle can only hope for both Metcalf and fellow wide receiver Tyler Lockett to pick up this passing offense to take some pressure off of the Seahawks rushing attack.

But how did Metcalf earn his 38.9 OSM score? According to the NFL’s Next Gen Stats, Metcalf averaged 2.5 yards of separation on targets in the Wild Card round while having the third closest average cushion from the defense at 4 yards. He would also have a +2.4 average yard after catch differential, the second-highest among pass-catchers in the first week of the 2019 postseason.

Metcalf caught seven of his nine targets and stretched the field with four completions of 20 yards or more. Prior to the 2019 NFL draft, Metcalf had his critics, but this weekend he shattered all expectations and has given Seattle a legitimate one-two punch in the receiving game to aid quarterback Russell Wilson.

The 2018 season’s playoff run for Seattle was cut short, partially due to the Seahawks’ sole reliance on Lockett in the receiving room. Former two-time pro bowl WR Doug Baldwin was facing injuries in his final season, and the Seahawks lacked that number two option for Wilson to find.

Metcalf has shown his size and speed for his weight gives him the advantage over his defenders, highlighted many times in his performance versus the Eagles in the Wild Card round. On the touchdown above, even with Eagles defensive back Avonte Maddox trying to drag him down, he still uses his power to fight into the endzone.

Then, with 1:47 left on the clock in the fourth quarter, Seattle faces a 3rd and ten from their own 11-yard line. It’s a chance for Philadelphia to stop the Seahawks and possibly tie the game, giving them a chance to stay off the couch in 2020 a little longer. Wilson would find Metcalf 38 yards down the field, heaving it up and giving his receiver a chance to use his 6’4″ frame to high point the ball to bring it down, clinching a divisional round appearance for the Seahawks.

Coming up on a road playoff game at Lambeau field is not strange territory for Seattle. With Metcalf coming off a big game, can he carry some momentum into this hostile environment and help this wild card team on their road to the Lombardi? His performance can help Lockett find some more space if the defense decides to allocate more resources to defending Metcalf. This one-two punch is crucial for Seattle at a time when their rushing attack, after being gutted by injuries, is still answering questions.

With a tough matchup versus the Green Bay Packers ahead, I expect Seahawks head coach Pete Carroll to look to Metcalf and Lockett again if Seattle fails to establish the running game as they did against Philadelphia. Aaron Rodgers is much better than Josh McCown, so the Seahawks defense needs the offense to sustain some drives to keep the defense off the field as much as possible. If not, fatigue could become an issue from which Seattle will not be able to recover. Let’s see if Metcalf can produce some more playoff magic.