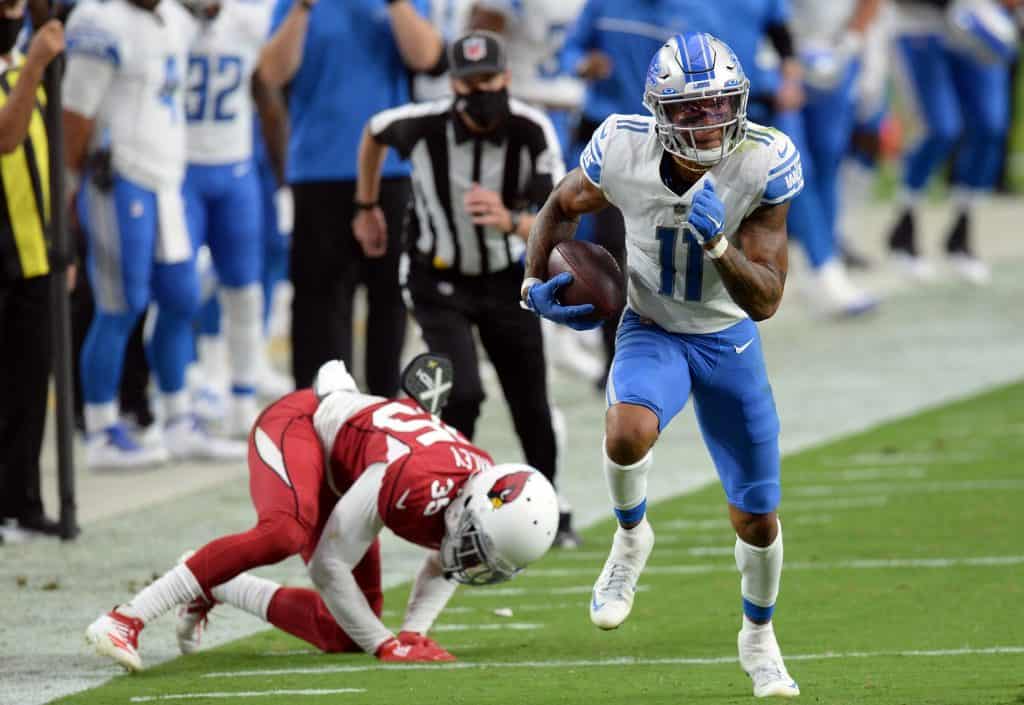 The Detroit Lions are a team in a significant rebuild. Before NFL free agency even begins, they will have a new head coach and a new quarterback. It appears that new quarterback Jared Goff will have a whole new wide receiver room to work with, too. The Lions didn’t use the franchise tag on WR Kenny Golladay — another high-profile pass catcher is on his way out. As he prepares to test free agency, where are some landing spots for Lions WR Marvin Jones Jr.?

In many respects, Jones Jr. has been the underrated of the two Lions WRs in this free agency process. Since arriving in Detroit in 2017, he has amassed 4,296 receiving yards at an impressive 14.9 yards per catch. In just his second season as a Lions WR, he demonstrated his big-play ability by leading the NFL in yards per reception. He’s scored 36 touchdowns during his time in Detroit.

In the last two seasons in particular, he’s proved to be a reliable pass-catching threat, snagging 67 percent of the passes thrown his way. He also finished his Detroit career on a high with 978 receiving yards and 9 touchdowns.

He’s made no secret of his excitement about the free agency process and used his social media accounts to make his aspirations known, including getting paid and getting a ring. Where are some landing spots for Marvin Jones Jr. that could fulfill at least one, if not both, of those aspirations?

Is Jacksonville Jaguars a contender for Marvin Jones Jr.?

As per Spotrac, the Jacksonville Jaguars have the third most salary cap space in the NFL. That spending room is a solid starting point for a Marvin Jones Jr. landing spot. The Jaguars are uniquely placed in that they have oodles of cap space, and they also have a ton of 2021 NFL Draft capital. RB need + money to spend = possible Marvin Jones landing spot.

The other part of the equation is a little less straightforward. As the worst team in the NFL last season (by record, before anyone gets upset), the Jaguars are theoretically the team furthest away from a title imaginable.

However, let’s use the power of imagination. Jacksonville will be starting a generational talent — presumptively — under center in Trevor Lawrence. They can rebuild their roster entirely using their draft and actual capital. It isn’t a complete stretch to think that they could transform from worst to first in 12 months. It’s a stretch, but it isn’t completely impossible.

Add in that the former Detroit WR has familiarity with the coaching staff, it all starts to add up.

Is Marvin Jones Jr. the solution to the Patriots’ pass-catching problems?

The New England Patriots just reinvested $14 million in another year of the Cam Newton experience. Without addressing the pitiful receiving options that blighted Newton’s first season in New England, it could be money flushed straight down the toilet. Thankfully for the Patriots, they have money to spend, which is a tick in the box as a landing spot for Marvin Jones Jr.

The former Lions WR could be the outside pass-catching threat that Newton so desperately needs in New England. If they add a receiver or tight end in the 2021 NFL Draft as well, it could completely overhaul New England’s offense. They may have struggled last year, but while Bill Belichick is at the helm, it’s wise never to rule the Patriots out of being a Super Bowl contender.

Unlike the previous two landing spots for Marvin Jones Jr., this one checks the Super Bowl contender box but possibly not the financial box. The Los Angeles Rams have the least cap space in the NFL; they aren’t in a position to go wild with the checkbook.

However, if Jones was willing to take a “team-friendly” deal, the possibility of glory is possibly closer than anywhere. The Rams have one of the best defenses in the NFL, spearheaded by Aaron Donald. They were essentially a quarterback short of a Super Bowl team last year. Let’s not forget that they actually reached one with Jared Goff.

With Matthew Stafford under center, they may have the best chance yet to land a ring. What better weapon to surround him with than his previous go-to WR in Detroit? The Rams are forever getting calls on Robert Woods. Well, this would allow them to answer those calls without depriving Stafford of a receiving weapon.

What is Marvin Jones’ market value in free agency?

How much could the teams mentioned above as landing spots for Detroit Lions WR Marvin Jones expect to pay to secure his services? According to Spotrac, Jones’ market value is around $10.5 million per year. This amount is derived by taking the position average of players with comparable statistical production and age. Those include former Lions WR Golden Tate.

That would make Jones comfortably affordable for the Jaguars and the Patriots. As mentioned above, the Rams’ cap situation is a little more complex to balance.

Oliver Hodgkinson is an NFL Draft analyst and staff writer for Pro Football Network. You can follow him on Twitter at @ojhodgkinson.

In this article:Marvin Jones Jr