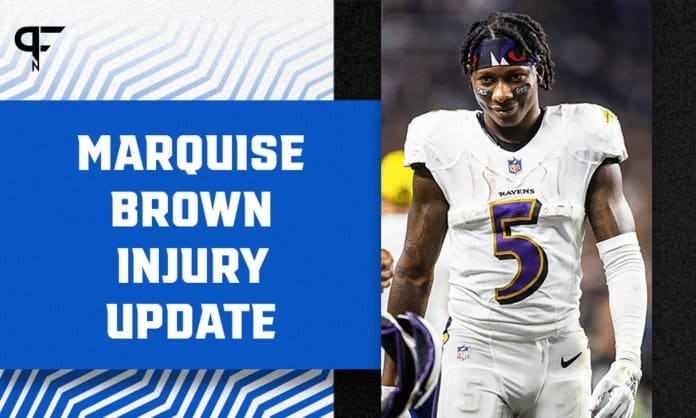 Marquise Brown practiced on a limited basis Friday and has a chance to play Sunday against the Kansas City Chiefs for the Baltimore Ravens.

Baltimore Ravens wide receiver Marquise Brown (ankle) is officially questionable for Sunday’s game against the Kansas City Chiefs after practicing on a limited basis Friday. Ravens coach John Harbaugh declined to provide clarity on this or any other injury for the rest of 2021, telling reporters Friday that he is done talking about them this season.

The tea leaves are at least a bit more encouraging now than they have been all week. Brown returned to practice Friday after missing the previous two days with an ankle injury. He had a brace on his left ankle during the portion of practice open to reporters Friday.

It’s apparently a new issue — he worked without limitation all last week and started the Ravens’ Monday night game against the Las Vegas Raiders.

Common sense suggests he got hurt during the Ravens’ gutting overtime loss. And it’s not a surprise Baltimore’s medical staff held him out of Wednesday’s walkthrough — which was a little over 24 hours after the team returned from Nevada.

But alarm bells did go off when Baltimore kept him questionable for Sunday’s game too. Brown appeared in all 16 games last year after missing two as a rookie.

Brown led the Ravens with 6 catches for 69 yards and 1 touchdown in Week 1. Yet, Sammy Watkins surprisingly proved to be the home-run threat. He averaged 24 yards on his 4 catches.

Other options for Ravens at wide receiver

If Brown is unavailable, snaps would presumably go to Devin Duvernay (who logged 39 of 68 in the opener), James Proche (7 of 68), and Tylan Wallace (only played special teams). Duvernay, like Brown, is questionable. He’s dealing with a groin issue.

Baltimore’s long-term chances could depend on Brown staying healthy. They’re without their top-three running backs — J.K Dobbins, Gus Edwards, and Justice Hill — and two of their best receivers — Rashod Bateman and Miles Boykin. All are on injured reserve, although Bateman and Boykin expect to return at some point in 2021

Kansas City’s defense is fully healthy heading into Week 2. And that’s good, considering how much room it has for improvement. The Chiefs surrendered 457 yards — including 8.2 per play — in its season-opening win against the Browns.