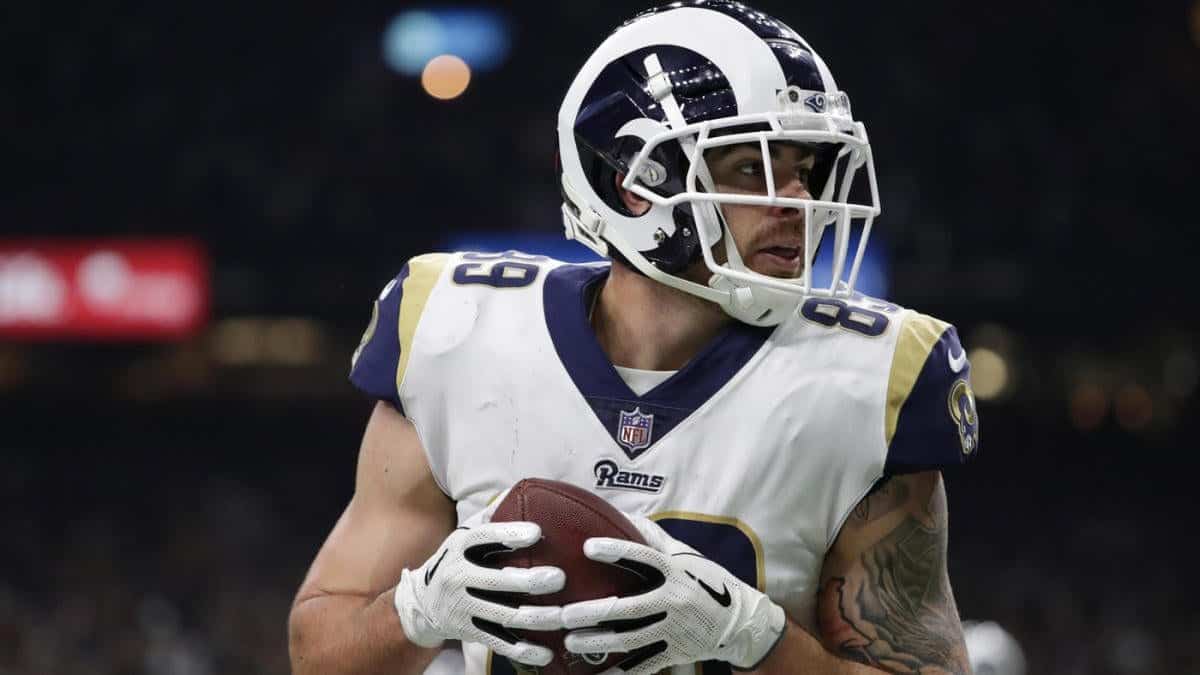 With the 2019 season underway, several NFL players have been earning massive extensions. Just recently, Los Angeles Rams quarterback Jared Goff picked up a four-year extension for $134 million with $110 million guaranteed. Although Ezekiel Elliott, Goff, and other superstars have made headlines for enormous extensions, Rams tight end, Tyler Higbee, quietly picked up a four-year extension of his own for $31 million.

Even though Higbee is not as productive as George Kittle or Travis Kelce, he is the perfect fit for the Rams. Higbee does not see too much receiving action, but he has improved this squad through zone and power blocking, routes off of play-action plays, and pass blocking. In this film room, we will see why the Rams extended Higbee’s contract, and how he fits in the Rams offense perfectly.

In 2018, Higbee lined up as a tight end 673 times. This considerable number is the second most snaps taken as a tight end last year according to Pro Football Focus. After all the snaps Higbee took, he finished with the 23rd best run-blocking grade with a 67.2.

Higbee is a larger tight end. He weighs in at 250 pounds and stands 6’6″. However, his blocking makes him seem light on his feet like a receiver.

In this clip, the Rams offensive line is spaced a few feet apart. The Rams space out for their zone scheme, so it spaces out the box and gives Todd Gurley lanes to run through or cut back into.

Higbee begins as the tight end next to the right tackle. When the ball is snapped, he shows excellent lateral movement. He can face his opponent and run laterally quick enough to cut off the defensive end from shutting down the cutback lane. If Higbee does not face his opponent here and get inside leverage, Gurley would not be able to cutback.

Higbee shows he is light on his feet and allows the Rams offense to function even on the opposite side of the play. His run defense is excellent with the Rams play-action style offense. With his quickness, Higbee’s run blocking coincides with his pass blocking.

Last season, Higbee helped Goff last the fifth-longest time in the pocket. According to Next Gen Stats, Goff had 2.95 seconds to throw the ball. Although some of that time came from deceiving defenses, it had to work side-by-side with the pass blocking.

Once again, Higbee shows the Rams how he fits in with this offense, through hard work and great lateral movement.

In this clip, the Rams are running a play-action bootleg pass. Higbee slides left with a tremendous shoulder-width shuffle. He then takes on the defensive end and initiates the contact. Unlike most tight ends chip blocking, he locks up within the shoulder pads and keeps his feet moving.

Higbee keeps his hands engaged and maintains a lower pad level so he can handle the defensive end’s momentum.

In this clip, the Rams get complex. Higbee begins as the tight end next to the right tackle. But, the Rams show a zone right run and Higbee is the backside block.

Higbee starts the play by sprinting across the line with his eyes ahead to see who he will need to block. Once he reaches the left side of the line, he knows the left tackle must slide right, so he picks up the defensive end. The end is then caught on the outside where Higbee chatters his feet. He then pushes him outside and nowhere near the play.

Without Higbee making that play, the left tackle misses the block and Goff would be obliterated from the blindside.

Not only is he a great blocking tight end, but he is also another weapon in the high powered Rams offense. Receiving is an underrated reason for why we saw a Higbee extension.

Higbee’s 15.0% DVOA (Defense-adjusted Yards Value Over Average) comes in as the eighth-best according to Football Outsiders. This means Higbee’s one play value is more valuable than nearly every other tight end in the league.

Higbee is not an exquisite route runner or red zone threat, but with the Rams sophisticated style and several weapons, he’s overlooked as a receiving tight end.

The Rams bread and butter is zone-read plays. Gurley runs through zone blocking, and Goff’s play-action runs off of that same zone blocking.

Once again, the Rams play-action is a fake zone run to the right, then a bootleg to the left. With Higbee being lined up as a tight end and not a receiver, the defense expects him to block. However, he acts like he will block backside then runs a flat route.

The route is nothing spectacular, but Higbee’s able to break free and get yards after the catch.

Lastly, after watching several routes Higbee ran last season, the main route he has nearly perfected is the corner route. Here we see the Rams in a bunch empty right formation. On the left side of the field, Higbee is on the outside of a stacked combo.

Higbee pushes the defender’s cushion off the snap. Once he has the opening, he cuts left and hits the sideline. Once it is caught, his awareness is shown as he jumps upfield and breaks a tackle for a significant gain.

Higbee’s receiving grade was graded low due to lack of receptions, but his ability should not be overlooked.

With Week 1 down, the superstars are racking up millions. But, Higbee shows the Rams and NFL fans that role players build strong Super Bowl rosters too.

Higbee is a great run blocker with his speed and technique. His pass blocking is superb because of his run block disguise and great vision. His receiving game is not seen much, but he is another force in a large pool of receivers in Los Angeles.

Nick Zeller-Singh is a writer for the Pro Football Network covering the PFN Film Room. You can follow him on Twitter @zickster21.