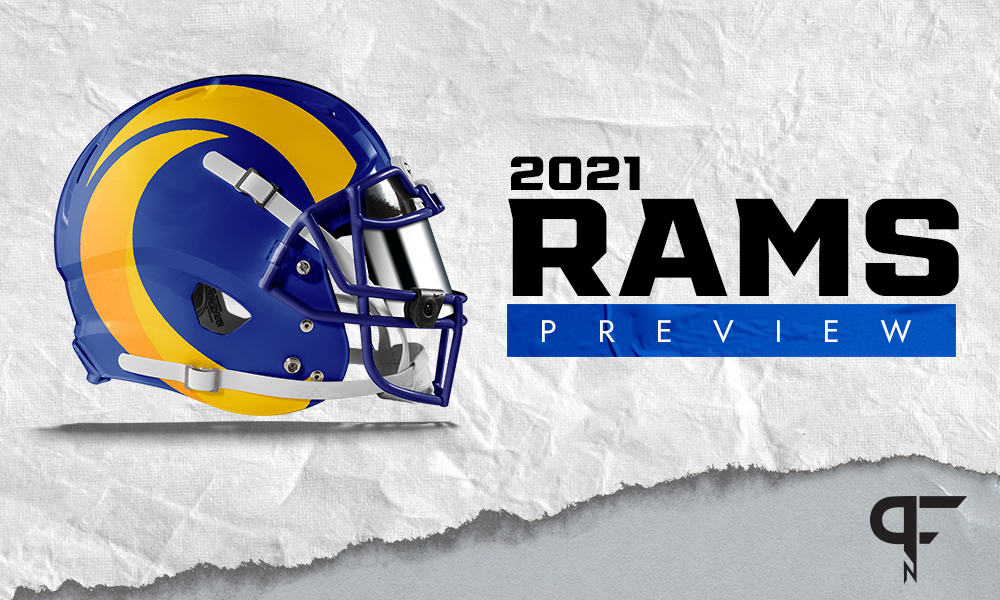 The Los Angeles Rams have a lot to prove in their 2021 season preview. They must win quickly, as they've depleted their future draft capital.

Nobody knows how to hype up a team quite like Rams Twitter. The season preview for the 2021 Los Angeles Rams has a Super Bowl victory as the expectation. We should slow down a bit, even with the upgrade at quarterback.

The Rams have the 10th-hardest strength of schedule in the NFL heading into 2021. The Rams’ season preview relies largely on how they fair in their six games against opponents projected to win 10 or more games. However, they also get to play the Texans twice and the Bears and Jaguars once apiece.

To make matters worse, four of those games against the cream of the crop are away from Los Angeles. They face the Packers, Colts, and Ravens on the road and one game against the 49ers. Even if you believe Vegas overvalues the Colts and 49ers, the Rams also play the Titans and Seahawks, making their schedule that much more difficult.

The biggest offseason move involved the Rams. They traded Jared Goff and picks for Lions quarterback Matthew Stafford. Both signal-callers are former first-round picks, but Stafford is the more physically gifted player. So, although he’s older, the Rams believed he had more to work with than Goff. It was a hefty price to pay, but it was probably worth it on a team that needed a quarterback to elevate the offense instead of simply driving the bus.

Los Angeles halted the loss of pass rusher Leonard Floyd by re-signing him to a four-year deal. On a team devoid of a second option behind resident metahuman Aaron Donald, the Rams had to play ball and pay a high price for Floyd.

The Rams traded Michael Brockers to relieve their salary cap woes. It wasn’t the ideal move, but the trade gave them more space than releasing him, and they did still receive a seventh-round pick in return. The DeSean Jackson signing could be huge for the Rams’ explosive potential. Jackson could be a difference-maker in a limited role and even possibly stay healthy with a lower snap count.

It’s impossible to sugarcoat the Rams’ 2021 NFL Draft. They didn’t have a first-round pick in 2021 or even in the near future, but they still struggled with the selections they made.

Neither the Tutu Atwell nor the Ernest Jones selections made sense. The Rams already had Van Jefferson, Robert Woods, Cooper Kupp, and DeSean Jackson on the roster, so the speedy and slight Atwell adds little immediate impact. He is also a ton of projection as an NFL wide receiver. There were better linebackers on the board than Jones, but he at least brings length and explosion to the equation, even if his tape was a struggle at times.

Bobby Brown was their best pick by far. The monster defensive tackle is an athletic freak with powerful hands and upside as a pass rusher, even at a lofty 320 pounds. His inconsistent play landed him in Round 4 instead of higher, but he could absolutely flourish as Donald receives triple-teams.

Robert Rochell was a fine upside pick for Los Angeles. He’s endlessly explosive and has the potential to be a starting cornerback in the league, despite his fourth-round selection. They then selected UCF wide receiver Jacob Harris who projects as a move tight end at the next level.

Earnest Brown tested as a poor athlete on the edge, but he’s infinitely long, and his tape showed a bit of burst and bend for his size. Jake Funk was a good special teamer at Maryland, but he might be thrust into a role getting snaps offensively after the injury to Cam Akers. They selected wide receiver Ben Skowronek and outside linebacker Chris Garrett to round out their draft.

Where do Los Angeles players rank in PFN’s Top 100?

The Rams only have three players on PFN’s Top 100 NFL Players, but it includes the most important position in sports and two of the best at their respective positions.

Stafford has a lot to prove for the Rams as he leaves a Lions franchise that has historically underperformed. He must find success in Los Angeles if he wants to have a lasting impact on the sport. He has the athletic ability and arm to create outside the structure of Sean McVay’s offense, which Goff could not accomplish. Now, we wait for the results.

Ramsey somehow remains a quiet force in the game despite his flamboyant style and on-field production. He’s the best cornerback in the league, and when he eventually makes a move to safety, he’ll probably be one of the best there too. His game goes so far beyond just covering a team’s best receiver. His impact against the run is outstanding, and I think his last missed tackle may have been at FSU.

Sean McVay is the original wonderboy head coach. He was the youngest in the league when the Rams announced his hire, and he came in guns blazing. His offenses did the most they could with what they were given, and his run game has helped revolutionize the league. And on top of all that, his podcast is one of the best on the internet. The guy just wins.

Kevin O’Connell won’t necessarily be calling the plays offensively for the Rams, but he’s coaching underneath McVay, so he’ll probably be a head coach heading into 2022. Previously, he was employed by the Washington Football Team.

Raheem Morris has been around the NFL for a long time. Before becoming the Falcons’ interim coach, Morris was the team’s defensive coordinator. Despite being a former head coach, Morris had never been an NFL DC before 2020. The Falcons’ defense looked more diverse under Morris than Dan Quinn, but the results still weren’t there. That should change with a better roster in LA.

It’s “put up or shut up” time for the Rams’ offense. They were incredibly efficient on the ground in 2020, but their passing attack took steps back. Stafford has a lot of expectations in Year 1, and the Rams need to finish inside the top 10 in offensive efficiency with their coach and offensive depth chart.

The defense lost Johnson and Hill, which hurts the continuity and overall talent on the back end. With the loss of defensive coordinator Brandon Staley, it’s tough to imagine this defense being the best in the league again in 2021.

The Rams’ strength of schedule allows for a wide range of options for this season’s preview. With the addition of Stafford and the loss of guys like Johnson and Hill from the secondary, the offense probably improves while the defense takes a step back. An 11-6 finish appears to be in their future, but that may not be enough to win their own division.