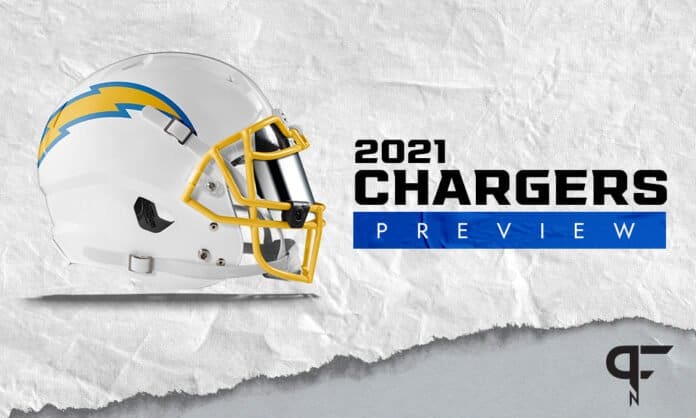 As we preview the Los Angeles Chargers season, what does 2021 have in store for the Bolts under new head coach Brandon Staley?

The 2021 season preview for the Los Angeles Chargers is fascinating as they are always one of the more exciting teams in the NFL. There is a lot of offensive firepower on the roster, and the defense has a few players who compete with the best at their positions. However, we’ve seen Chargers teams in the past struggle to realize their potential.

If the Chargers remain relatively healthy in 2021, which is a big ask for some of their superstar talent, this team should compete for the top AFC Wild Card spot. They have the ninth-easiest schedule in the NFL, according to Vegas projections.

Their easy schedule spawns from only having to face three teams projected to win 10 games in 2021. They battle the Chiefs twice within their division and play the Browns and Ravens in their rotation with the AFC North. The Chargers will play the Browns in Los Angeles and the Ravens the very next week on the road.

Conversely, the bottom of their schedule is outstanding for their projection as well. Los Angeles plays a lot of teams that Vegas projects to struggle in 2021. The Chargers face the Bengals, Giants, Eagles, and Texans.

They should also feel comfortable about the matchups against the Denver Broncos and Las Vegas Raiders. That makes eight games the Chargers should be confident in next season. They also play the Steelers, who lost key pieces to the secondary and face the depletion of their offensive line.

The Chargers were busy on the offensive line during the 2021 offseason. Los Angeles saw Sam Tevi, Forrest Lamp, and Dan Feeney all leave the organization. However, they made one of the best moves of the offseason by adding Corey Linsley.

Linsley is the best center currently in the NFL. Pairing the seven-year veteran with sophomore QB Justin Herbert was an outstanding move. Despite only playing 13 games in 2021, Linsley received his first first-team All-Pro selection.

Los Angeles also signed Matt Feiler away from Pittsburgh. He has positional versatility but will be used on the interior for the Chargers. He played left guard last season for the Steelers, but he’s also played right tackle in the past. From a footwork and hand placement perspective, he might be able to start at either interior spot.

For their final interior spot, they signed veteran guard Oday Aboushi. Aboushi has also played snaps at both left and right guard spots throughout his career.

Furthermore, the Chargers saw veterans Melvin Ingram, Denzel Perryman, and Casey Hayward leave the defense. Offensively, they lost TE Hunter Henry. Although, the team signed Jared Cook to be a stopgap veteran for them at the position.

The Chargers got exactly what they wanted and needed in Round 1 of the NFL Draft. Northwestern offensive tackle Rashawn Slater was one of the most popular mock draft picks outside of the first two selections. The Chargers desperately needed blindside protection for their rising star at quarterback, and they get that in Slater.

In Round 2, Los Angeles went with need again but drafted the best player available at that need. Asante Samuel Jr. was another necessary addition. He’s slightly smaller than the ideal outside cornerback, but his footwork and ferocity make up for it.

Josh Palmer and Tre’ McKitty were their next two picks, both bolstering the offense. Palmer was an undervalued player during the NFL Draft process because of the putrid quarterback play in Tennessee. He has the potential to be a better pro than a college player. McKitty is also a developmental player at the tight end position.

Chris Rumph II, Brendan Jaimes, Nick Niemann, Larry Rountree III, and Mark Webb rounded out their draft. Rumph is an undersized, stand-up pass rusher and Neimann is an athletic upside pick as an off-ball linebacker. Webb is an explosive and long safety, but he never really put it together while at Georgia.

The Chargers head into Year 1 with head coach Brandon Staley with playoff aspirations. Staley has been coaching defense for the better part of 15 years now. He started as a graduate assistant at Northern Illinois.

He worked his way through smaller schools until he landed a defensive coordinator job with James Madison in 2014. Staley coached outside linebackers for three NFL seasons before becoming the Rams defensive coordinator in 2020. His defense was good enough to land him a head coaching gig for 2021.

You may know Joe Lombardi from the old USAA commercial he was featured in (or for being the grandson of the famed Vince). However, what you may not know is that he’s been an NFL coach since 2006.

The Chargers’ offensive coordinator role will be his second stint as an offensive coordinator. He went to Detroit in 2005-2006 with prime Golden Tate and Calvin Johnson, who was at the end of his career, but still very, very good. Those offenses weren’t great, so it’ll be interesting to see what he’s learned in the past few years back with New Orleans.

This will be Renaldo Hill’s first opportunity to be a defensive coordinator at any level. The former cornerback has spent his post-playing career as a defensive backs coach since 2013. After spending his last two seasons in Denver, he moves to a division rival looking to assert defensive dominance.

There are high hopes for an even higher-powered offense in 2021. Second-year QB Justin Herbert is a dark-horse MVP candidate for many. The big-armed, athletic quarterback fits the modern QB archetype. With an offense that upgraded the line and still has outstanding weapons, there’s reason to believe they should improve.

The defense has loads of individual talent present. Nasir Adderley and Derwin James make for a dominant safety duo. Their defensive depth chart lacks much talent at cornerback, so the pass rush and coverage scheme must work congruently.

With the Chargers’ strength of schedule and the upgrades they made to the offensive line, it’s safe to say they should compete for a playoff spot in 2021. As long as they remain relatively healthy this season, they’ll finish around 11-6.