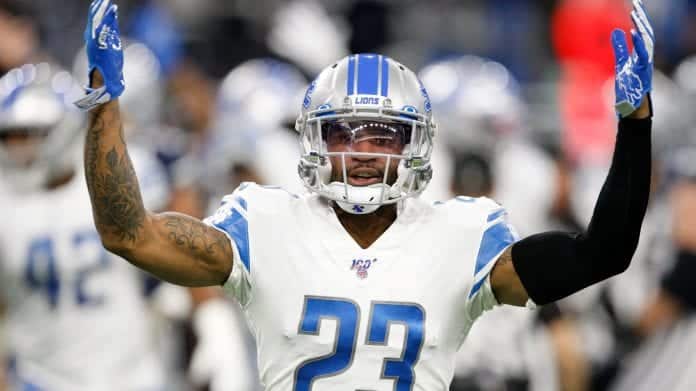 Lions' CB Darius Slay is on the trade block, and there is plenty of interest. PFN's Tony Pauline and Ben Allbright name four potential landing spots.

After finishing the 2019 season dead last in passing yards allowed, it was inevitable that there would be changes on the defensive side of the ball for the Detroit Lions. One of these changes includes star cornerback Darius Slay, who is entering the final year of his contract with a cap hit of $13.4 million, per Spotrac. Based on all the reports over the past few weeks, it appears that it will only be a matter of time before he is traded to another team.

But where might he land? Pro Football Network Insider Ben Allbright reports that the Lions have been contacted by nearly a third of the league regarding the availability of Slay. But, PFN Insider Tony Pauline says there are two teams at the top of the pack who are interested in acquiring Slay.

With that in mind, let’s take a look at the teams whose names have come up and the likelihood of them getting a deal done with the Lions.

In his most recent mailbag, Pauline reported that one of the teams who is a leading candidate to acquire Slay are the Denver Broncos.

“I am told right now the two teams at the top of the pack to land Slay are the Denver Broncos and Los Angeles Rams. The Rams are interesting considering they traded for Jalen Ramsey last year. The Broncos are expected to lose Chris Harris in free agency, so Slay would slide right in.”

The Broncos are considered a potential landing spot for Slay because they have the draft capital that it might take to make a deal. After their first-round pick at 15, Denver has six more picks in the first four rounds, including three third-round picks. It would likely take one of those picks and some additional pieces to convince Detroit to let Slay go.

However, Allbright believes that the cost of Slay would be too expensive for the Broncos. According to OverTheCap.com, Denver has nearly $60 million in salary-cap space for the 2020 season. They could have even more if they decide to cut quarterback Joe Flacco. It is unclear what they are requesting exactly, but GM John Elway is unlikely to part ways with too much draft capital.

That said, Slay could be a perfect fit in head coach Vic Fangio’s scheme and is a proven lockdown corner. Last season, Slay broke up 13 passes and picked off two while relinquishing only 10 receptions of 20 yards or more and three touchdowns. Compare that to what Harris did, breaking up just six passes with one interception, while relinquishing 10 receptions of 20 yards or more and four touchdowns.

Looking at those numbers, some may say that Slay could be considered a slight upgrade. But it remains to be seen just how much Elway would be willing to let go of for Slay’s services.

The other team mentioned in Pauline’s mailbag were the Los Angeles Rams, who are basically in the exact opposite position as the Broncos. They have very limited cap-space ($20 million) and lack any first-round draft picks for the next two seasons. With limited options, it would take some maneuvering from GM Les Snead to make this deal come to fruition.

The Rams have become infamous for moves regarding big name cornerbacks in the NFL. Over the past three seasons, the Rams have been involved in deals acquiring Aqib Talib, Marcus Peters, and Jalen Ramsey. However, only Ramsey is still on the team, and he will be a free agent after the 2020 season.

If the Rams know that they will not be able to bring back Ramsey, it is possible that they become more aggressive trying to bring in Slay. But, it all comes down to trade compensation. If they are demanding a first-round pick, the Rams would likely be out of contention.

Allbright reports that the Philadelphia Eagles have also inquired about Slay. This would be the second time that the Eagles have tried to convince Detroit to move him, as they were reportedly interested at the trade deadline last year. It is easy to argue that the Eagles are the team most desperate for a lockdown corner as we head into the free agency period.

The Eagles have the draft capital to make the move, as they are projected to have seven picks in the first four rounds. With that, they likely have more than enough ammunition to get a deal done, especially with two third-round picks and three fourth-round picks. However, they are tight with cap-space and may be looking to get younger, especially with a number of veterans over the age of 30.

But adding Slay would be a big boost to their secondary and would immediately become their best cornerback. Many would say that he’d be the best cornerback the team has had in the past several years. Since 2014, Slay has 19 interceptions, which ranks him fourth in the entire league. In that same amount of time, the entire Eagles team has roughly 82 interceptions.

The Eagles are in a tough spot at cornerback since both Jalen Mills and Ronald Darby are free agents. They will likely add a defensive back in the 2020 NFL Draft, but adding someone like Slay could help make an immediate impact.

Another team that Allbright believes is in the mix for Slay are the Indianapolis Colts. The Colts could have the two things required to land Slay – cap space and draft capital. They have three picks in the top-50 (13, 34, and 44) and quite a bit of salary cap space ($74 million). Indianapolis could be one of the rare teams that could afford to trade and sign Slay to a contract extension right away, which is what the CB would reportedly prefer.

Colts GM Chris Ballard has not been one to sign players to huge contracts or trade draft capital, but Slay could convince him to make an exception. The Colts defense ranked 23rd in the league in total passing defense last year, giving up 248.9 yards per game. The issue for Indianapolis was that the defense struggled to stay healthy.

Currently, Pierre Desir and Kenny Moore II are the two corners slated to start for the Colts. They combined for 13 pass deflections and five interceptions last season. However, both missed at least five games. Adding Slay to the secondary could help add valuable stability.

With a third of the league reportedly in discussion with Detroit, it goes without saying that things could drastically change over the course of the next few weeks. With NFL free agency officially starting Wednesday, March 18th, teams still have quite a bit of time before needing to make any substantial decisions. However, the more interest there is in acquiring Slay, the more compensation the Lions can demand from other teams.

To stay up to date with everything we are hearing, make sure to continuously check our 2020 Free Agency Tracker where we update each team with the most recent news and rumors.