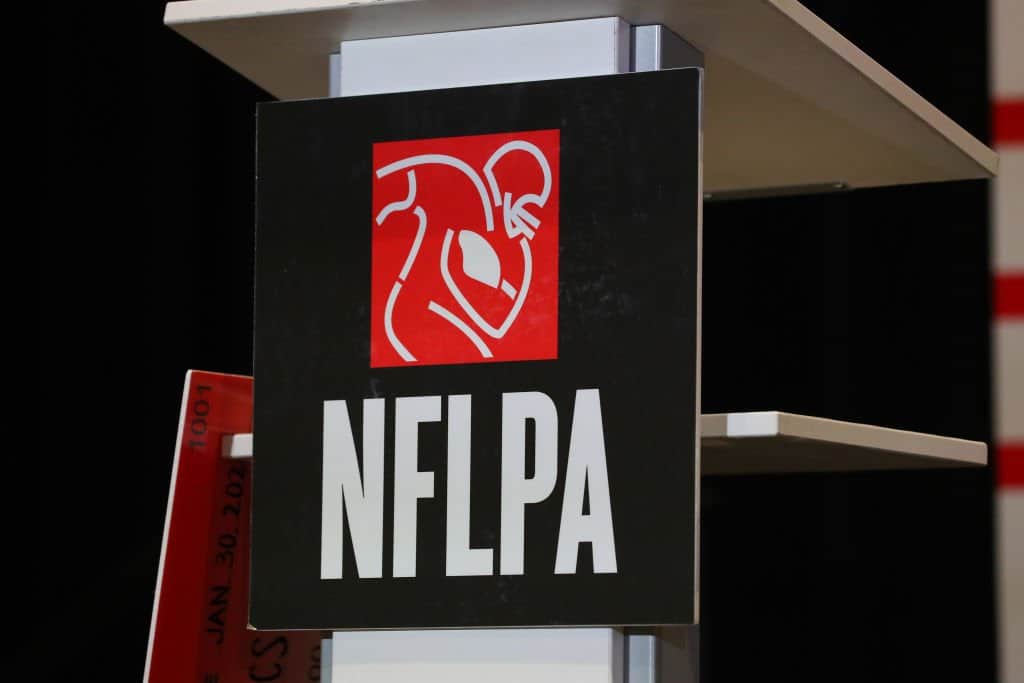 MIAMI BEACH, FL - JANUARY 30: A general view of the National Football League Players Association logo during the NFLPA press conference on January 30, 2020 at the Miami Beach Convention Center in Miami Beack, FL. (Photo by Rich Graessle/PPI/Icon Sportswire via Getty Images)
What's in this article? Click to show
What should we expect to see when it comes to the upcoming NFL offseason?
What is the NFLPA hearing about the NFL Combine?
What is the news heading into the offseason regarding the 2021 NFL season?
Did the NFLPA discuss mandatory vaccinations of players?

With the NFL offseason underway for over 85% of NFL players, the NFLPA held a conference call on Tuesday, January 19th. During the call, the NFLPA updated the players on the upcoming offseason, the 2021 NFL Combine, and the current picture when it comes to the 2021 NFL season.

What should we expect to see when it comes to the upcoming NFL offseason?

At this point in the year, the NFLPA is expecting the NFL offseason to progress according to the calendar already laid out. That includes the new league year beginning on March 17, with the opening of the free agency window.

Expectations at this stage are that the 2021 NFL offseason will look extremely similar to 2020. This would include, in all likelihood, virtual OTAs and minicamps. NFL Network’s Tom Pelissero reported that NFLPA executive director DeMaurice Smith told players that there is no “rosy outlook” on the widespread vaccination of players by August.

Will we see players able to visit teams as part of free agency?

Currently, there is no determination on whether players will be able to fly to visit teams. The procedure is expected to mirror that of 2020 when players could not meet with teams during the process. This included team personnel being unable to travel to players.

One of the biggest issues around this was with the medical evaluations of players. Teams were left having to rely on neutral doctors to evaluate players. This raised concerns about the potential of deals falling through at a later date.

What is the latest the NFLPA is hearing regarding the salary cap in the upcoming offseason?

The salary cap for 2021 and beyond has been a subject of much discussion over the past year. With teams having largely played with empty stadiums, the expectation is that the salary cap will fall in 2021 due to a loss of revenue in 2020. This fall could have a major impact on how the 2021 NFL offseason progresses.

The NFLPA expects to hear an announcement in the next few weeks regarding cap space. While this number will not be the final “hard” number, it will provide an estimate for teams. This will allow teams to start making plans for addressing the 2021 NFL offseason in terms of potential cut candidates, extensions, restructures, trades, and signings.

What is the NFLPA hearing about the NFL Combine?

The NFLPA call also addressed the latest on the NFL Combine. The combine is an integral part of the NFL offseason with teams, players, agents, and various personnel present in Indianapolis at Lucas Oil Stadium.

The NFLPA discussed how invitations for the 2021 NFL Combine are expected to be sent out, as has historically been the case. These invites were referred to in the release put out by the NFL earlier in the week.

However, the NFLPA was unable to add more details around the release from the NFL. Much like with free agency, player medicals are the key element of the NFL Combine. Unfortunately, the NFLPA has no further details at this time on how those medicals will be performed.

What is the news heading into the offseason regarding the 2021 NFL season?

During the call, the NFLPA informed players that players selected to the Pro Bowl will still receive a bonus despite the Pro Bowl game not taking place. However, the amounts will differ from past seasons.

Looking forward to the 2021 season, the call’s key point was that several elements would need to be renegotiated during the upcoming NFL offseason. The 2020 adjustment to work rules was only agreed upon for the 2020 season. Therefore, the NFLPA expects that they will have to go through collective bargaining. Smith commented that the NFLPA will make an assessment in March and April and proceed from there.

One such element is the process of opting out. Those rules were only put in place for the 2020 season. However, the NFLPA is considering trying to renegotiate the opt-out situation for the 2021 season.

The short-term injured reserve process, which was instigated for the 2020 NFL season, is another element that will require renegotiation. The NFLPA indicated that they would look to keep this provision in place moving forward.

What is the preseason process expected to look like for the 2021 NFL season?

The end of the 2021 NFL offseason and the progression into the season itself also remains in doubt. There has been much discussion around the NFL extending the season to include a 17th game. As part of those discussions, the idea of reducing the preseason has been discussed.

As it stands, there is no firm decision on what the 2021 preseason will look like. It could still have the standard four-game structure, the zero games we saw in 2020, or a structure somewhere between those two.

Additionally, the NFLPA implied that they would make a push to have limited pads workout/practices. This would be in a similar style to what we saw last fall.

Did the NFLPA discuss mandatory vaccinations of players?

There have been no details regarding the NFL’s plans when it comes to player vaccinations. As discussed earlier, it is expected that vaccinations will not be in place over the coming 2021 NFL offseason. On Tuesday’s call, the NFLPA told players there was no determination on the NFLPA’s stance if the NFL mandates vaccines for all players.