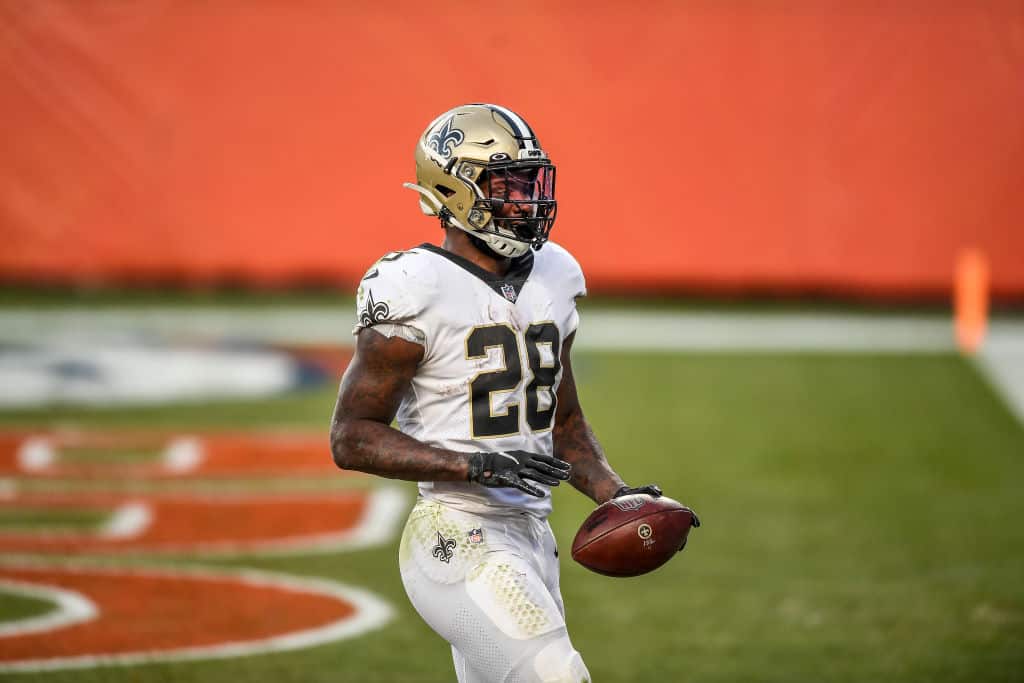 DENVER, CO - NOVEMBER 29: New Orleans Saints running back Latavius Murray (28) rushes for a third quarter touchdown during a game between the Denver Broncos and the New Orleans Saints at Empower Field at Mile High on November 29, 2020 in Denver, Colorado. (Photo by Dustin Bradford/Icon Sportswire via Getty Images)
What's in this article? Click to show
Latavius Murray has come back down to earth for fantasy managers
What is the situation in New Orleans heading into Week 16?
Should you start or sit Latavius Murray in Week 16?
Want more fantasy football analysis and news?

After an up and down season, should Latavius Murray be an option worthy of your trust in Week 16 of the fantasy football season? Let’s take a look at Murray’s recent numbers, the situation in New Orleans, and the matchup ahead of him in Week 16.

Latavius Murray has come back down to earth for fantasy managers

It has been an interesting season for Latavius Murray and his fantasy managers. The 30-year old running back has averaged 8.8 fantasy points per game, but at one stage looked to be the unlikely hero for fantasy managers.

The start of the season was exactly what we expected

Through the first three games, there was no real surprise around Murray’s role. Alvin Kamara was the star, with Murray serving as the reliable backup, able to shoulder the load when required. Through the first three weeks, Murray saw 30 carries and four targets but could only post 17.6 fantasy points combined in PPR formats.

Week 4 saw Murray score two touchdowns, meaning he finished the week with 21.3 fantasy points. However, after that superb performance, things returned to normal. Between Week 5 and 10, Murray scored between 5.7 and 7.7 fantasy points in all five games. However, that all changed after Drew Brees got injured in Week 10.

Heading into Week 11, the Saints had to go to Taysom Hill at quarterback. However, with Alvin Kamara struggling with an injury, the running back beside Hill in practice was Murray. That additional practice time appeared to translate to more time on the field for Murray.

In the first nine games, Murray had averaged 10 carries and 1.6 targets per game. With Hill under center in Week 11, he saw 12 carries and two targets. While not a big increase, his workload in the victory over the Falcons was a sign of things to come the following week.

In Week 12, Murray saw the most carries he had all season, 19. He added a single target, but he found the end zone twice while amassing 124 yards on the ground. Week 12 saw Murray return his highest fantasy points total of the season, 25.6.

A return to normality has followed

As Kamara has got healthier in the last three weeks, Latavius Murray’s touches have seen a significant regression. From Week 13 on, Murray has totaled just 18 touches. Week 13 saw him carry the ball five times for 17 yards, and he caught two passes for zero yards.

However, that was not just a bad game. In those last three weeks, Murray has just 53 total yards from the line of scrimmage. His fantasy point returns in Weeks 13 and 14 are the lowest of the season.

In Week 15 against Kansas City, he carried the ball four times for three yards. However, thanks to his ability to find the end zone on a reception, Murray scored 10.1 fantasy points. All the outing in Week 15 did was emphasize how Murray has returned to a touchdown-dependent fantasy option.

All have this up and down has resulted in Murray ranking 36th at the position in terms of Pro Football Network’s Consistency Score. While not terrible, Murray is not someone you can play and expect a solid 8-10 point floor with upside.

What is the situation in New Orleans heading into Week 16?

The somewhat strange thing about Murray’s usage in the last three weeks is that it has dropped below even the level he saw pre-Taysom Hill. Some of that could be due to the nature of the games the Saints have been in recently.

In Taysom Hill’s first two starts, the Saints won by a combined 43 points. Using your bruising running back (when up double digits) is much easier than when you are in a tight game or chasing from behind.

Even though Murray has seen his percentage of snaps decrease in the last five weeks straight, he still saw 29% of the offensive snaps in Week 15. Murray’s season-high in terms of snap percentage was Week 11 (49%), and his season-low was 24% in Week 8. The last three weeks have seen Murray between those three numbers.

Regardless of Alvin Kamara’s health, we can pencil in at least 25% of the snaps for Latavius Murray. However, we have seen that being on the field doesn’t necessarily translate to opportunities and fantasy points in the last two weeks. The problem is when your maximum snap percentage is 50%, it does not leave a lot of opportunities to exploit a ceiling either.

This problem is exacerbated by the fact Murray does not routinely exploit opportunities. In the past four years, Murray’s Fantasy Points Differential is between -3% and 2%. He does exactly what an average running back would do with his carries and nothing more.

Should you start or sit Latavius Murray in Week 16?

Making start and sit decisions in Week 16 is tough enough with what is on the line in fantasy playoffs. Having to end your Christmas Day watching your decision blow up in your face can bring a sour end to a day of festivities. What does the matchup look like for Latavius Murray in Week 16, and is he is a risk worth taking?

There really could not be much more of a middle of the road defense for the Saints run game to go up against in Week 16. The Vikings allow the 17th most fantasy points to the position and rank 20th in Pro Football Network’s Defensive Points Allowed Consistency Score. They are not a tough matchup, but they certainly are not an easy one either.#

However, one thing does play into Murray’s hands a little. The Vikings allow the seventh-most rushing yards to the running back position (104.6 per game). They are also tied for the fourth-most 100-yard rushing performances allowed with four. They have been reasonably tough in the red zone, allowing just 10 touchdowns and 6.1 fantasy points per game inside the 20.

The Vikings are adequate against the running back position, but they have their struggles with the run game as opposed to receiving backs.

Will Latavius Murray get the opportunity to make an impact for fantasy managers in Week 16?

Opportunity is the key question for Murray. If the Saints can get up by 10-14 points, they will look to save some hits on Alvin Kamara. That would play into the hands of Murray and his fantasy managers. If the Saints from earlier in the season show up, there is no reason that is not possible.

However, if we see a similar Saints offense to what we saw to start Week 15, it is a different story. Drew Brees was clearly limited, and it put them on the back foot. In that circumstance, Murray is likely to see closer to 5-7 carries than see 10.

It is tough to trust Latavius Murray in fantasy playoffs in Week 16. He needs touchdowns, and he is facing a team that allows just 0.8 touchdowns per game to the position.