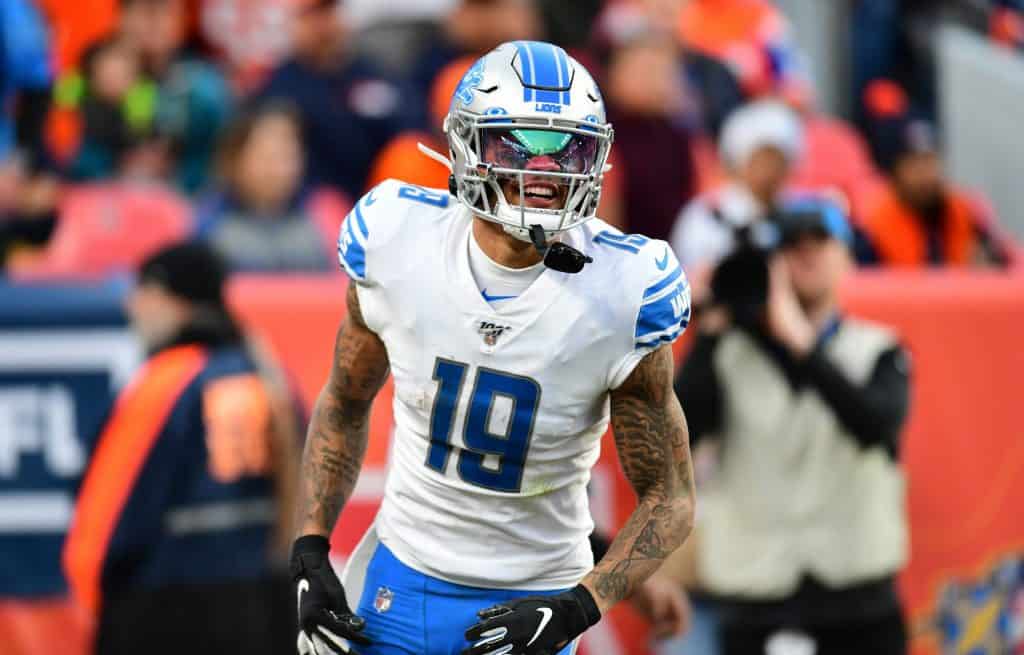 After a tough 2020 NFL season, where are the potential landing spots for running back Kenny Golladay in free agency? There have been plenty of rumors surrounding the future of Kenny Golladay, but will we see him sign when free agency officially begins on Wednesday, and if so, where?

While undoubtedly talented, the injury-plagued 2020 season has left Golladay entering free agency with a lot of question marks. With rumors swirling around a slow market for free agent WRs, where will we see Kenny Golladay playing in 2021?

The Lions have already lost Marvin Jones to the Jaguars in free agency. They added Tyrell Williams, but they do not have a true No. 1 receiver for Jared Goff to target.

Golladay could be the ideal fit to come back and lead this Lions offense once again. He would give Goff a receiver that he knows can be a red zone threat, as well as go up and compete for the ball. However, if the Lions were going to blow Golladay away with an offer, they would have done so before letting him hit free agency.

The Dolphins absolutely need to go out and add wide receiver talent for their second-year QB. The expectations are that the Dolphins will invest a high draft pick in a receiver. On the other hand, they need a secondary option to head up the offense while the rookie gets to grips with the NFL.

Kenny Golladay is an extremely talented receiver, who pulled in 11 touchdowns and 1,190 yards in 2019. That big-body, dominant-type receiver would absolutely be something that would benefit Tua Tagovailoa. The biggest issue with Golladay for the Dolphins is that he caught less than 60 percent of his targets through the first six seasons.

The Texans have Brandin Cooks and Keke Coutee heading up their offense. They could benefit from adding another primary receiver, who could win in 50/50 situations. Additionally, the Texans are looking to try and placate QB Deshaun Watson. Adding a big target like Kenny Golladay could go a long way towards doing exactly that.

An offense consisting of Golladay, Cooks, Coutee, and the returning Randall Cobb would have a great chance to be an exciting offense. That group could help catapult the Texans back into the AFC playoff discussion immediately in 2021.

The Jets already added Corey Davis to their receiving group. Their trio now consists of Davis, Jamison Crowder, and Denzel Mims. However, none of them are a true No. 1 type receiver right now in their careers. The Jets also have an out on the contract with Crowder, where they could move on and save around $10 million in cap space.

Therefore, Kenny Golladay could make sense in terms of that true WR1. They could offset the cost in 2021 by releasing Crowder and give their QB a dynamic trio of receivers to work with in 2021.

What is Kenny Golladay’s potential market value in free agency?

After being selected in the third round of the 2017 NFL Draft, Golladay has played on a four-year deal worth $3.2 million. Golladay has far outperformed that deal and is likely ready to set the top of the market for free agent WRs.

Spotrac has Golladay projected for around $17 million a year on a five-year contract. That would make the overall deal worth around $85 million. They compare a potential deal for Golladay to those signed by Amari Cooper ($20 million), Brandin Cooks ($16.2 million), Michael Thomas ($19.25 million), and Odell Beckham Jr. ($18 million).

The issue for Kenny Golladay, however, is that the main rumor so far during free agency is that the wide receiver market is far slower than many expected. As a result, Golladay may have to settle for a lower, or shorter, deal than Spotrac projects him for.