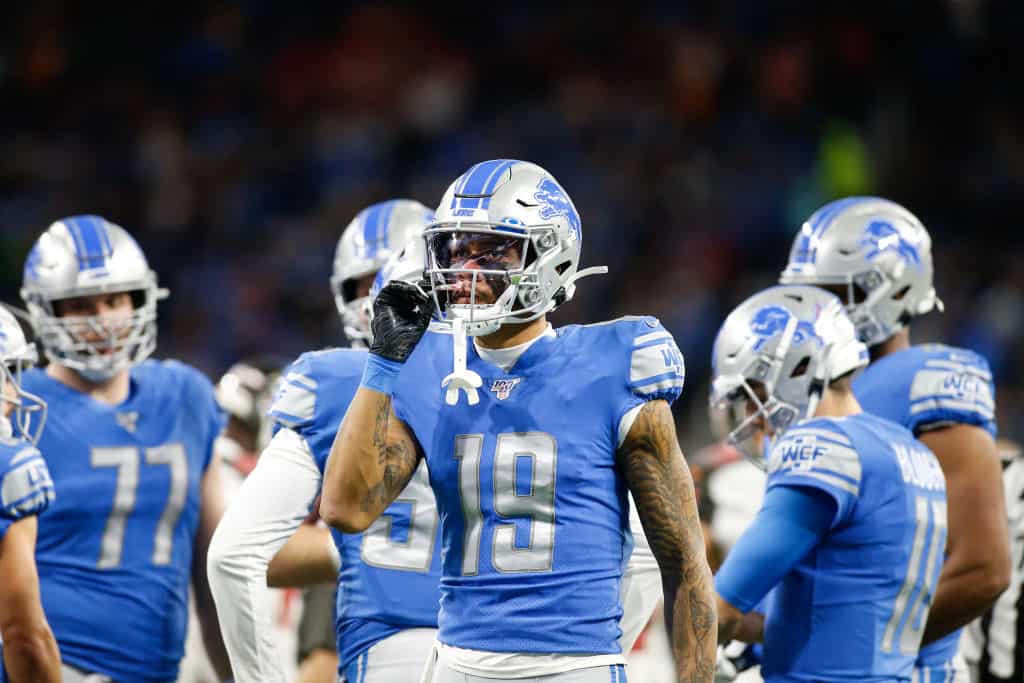 DETROIT, MI - DECEMBER 15: Detroit Lions wide receiver Kenny Golladay (19) look on during a regular season game between the Tampa Bay Buccaneers and the Detroit Lions on December 15, 2019 at Ford Field in Detroit, Michigan. (Photo by Scott W. Grau/Icon Sportswire via Getty Images)
What's in this article? Click to show
Latest practice status for Kenny Golladay
Kenny Golladay missed two straight weeks due to a hip injury that occurred vs. Indianapolis
Marvin Jones Jr. has shined while Kenny Golladay deals with his injury
What should you do with Kenny Golladay moving forward?
Want more fantasy football analysis and news?

There might not be a more vital position to determining your team’s upside in fantasy football than the wide receiver, and knowing which players are healthy or who is on the injury report could be the difference in a win or loss in Week 11. With just four weeks until the start of the fantasy playoffs, managers need all players available, especially Detroit Lions WR Kenny Golladay, who has been out with a hip injury. Is there any update on the receiver’s injury, and when can managers expect to see him back on the field and in their lineups?

According to a report by Adam Schefter, the Detroit Lions have ruled out both Kenny Golladay and Danny Amendola for Detroit’s Week 11 game against the Carolina Panthers. Earlier in the day Dave Birkett of the Detroit Free Press reported that Kenny Golladay was once again absent from practice on Friday having also missed practice Thursday.

Kenny Golladay missed two straight weeks due to a hip injury that occurred vs. Indianapolis

The Lions didn’t just come up short in their game against the Indianapolis Colts; they also lost one of their best players on offense. Wide receiver Kenny Golladay left the game with a hip injury and did not end up returning in the second half. Golladay saw four targets in the first half but failed to record a catch. Sunday marked the first time he was unable to make a catch in a game that he was active in his career.

NFL Network’s Ian Rapoport reported that Kenny Golladay’s injury would cause him to miss Week 9, and the team had labeled the star 27-year old WR as “week-to-week,” which put Week 10 in jeopardy. There was also talk of Golladay landing on the short term IR, which would take him out of the game for a minimum of three weeks.

The team has been very quiet on Golladay’s status other than listing him as out, which the team did on Friday. The fact that the team listed him as out two days before the game started makes you wonder how close Kenny Golladay even is from a full recovery from his injury.

Golladay missed the first two weeks of the season with a hamstring injury and has 20 catches on 32 targets for 338 yards and two touchdowns in five games. On a points per game basis, Golladay’s 13.2 is respectable. But after being selected as the WR8 (25 ADP), his WR72 standing on the season has been one of the most disappointing picks of the 2020 fantasy season.

Marvin Jones Jr. has shined while Kenny Golladay deals with his injury

Marvin Jones had a fantastic day on Sunday against a stout Washington defense, leading his team in all receiving categories and securing a touchdown for the third week in a row. Outside of D’Andre Swift’s massive day, Jones was the star of the show.

Jones finished the day with eight receptions on 10 targets for 96 yards and a touchdown. What makes this impressive is knowing how good the Washington defense has been. Dare I say elite?

They came into Week 10 as one of just two teams in the NFL who’ve held receivers to fewer than 1,100 yards this year (Rams were the other), as they’ve allowed only 132.0 yards per game to the position. They’ve also allowed just three touchdowns to wide receivers on the year, which was tied with the Bears for the fewest in the league. There had been only three top 30 wide receivers against them through eight games, and those receivers were Amari Cooper, DeAndre Hopkins, and Robert Woods.

In the past three weeks, do you know where Marvin Jones is in fantasy ranks? He is WR8 between Weeks 8 and 10! He has caught 14 of his 21 targets for 178 yards and four touchdowns during this stretch while averaging 18.6 PPR points per game.

It is worth mentioning that part of his Week 10 blowup was aided in the absence of T.J. Hockenson. However, the fact that he has done this over multiple games gives me confidence in Jones heading into next week.

If Kenny Golladay is going to miss more time with his injury, you can fire Marvin Jones up as a low-end WR2/high-floor WR3 against the Carolina Panthers next week.

What should you do with Kenny Golladay moving forward?

Unfortunately, there is not much you can do at this point but hold onto him right now. If you are in redraft leagues, most of them just had their trade deadline pass, so you can’t trade him away. Even if you could, getting back even half his value would be a stretch and not close to the ceiling that Golladay would bring to your roster every week.

Hopefully, we can get some clarity on Kenny Golladay’s injury as we head into the weekend. You know the team wants him on the field as much as possible because his days in the Motor City could be numbered as both Golladay and Jones are set to become free agents after the 2020 season ends.