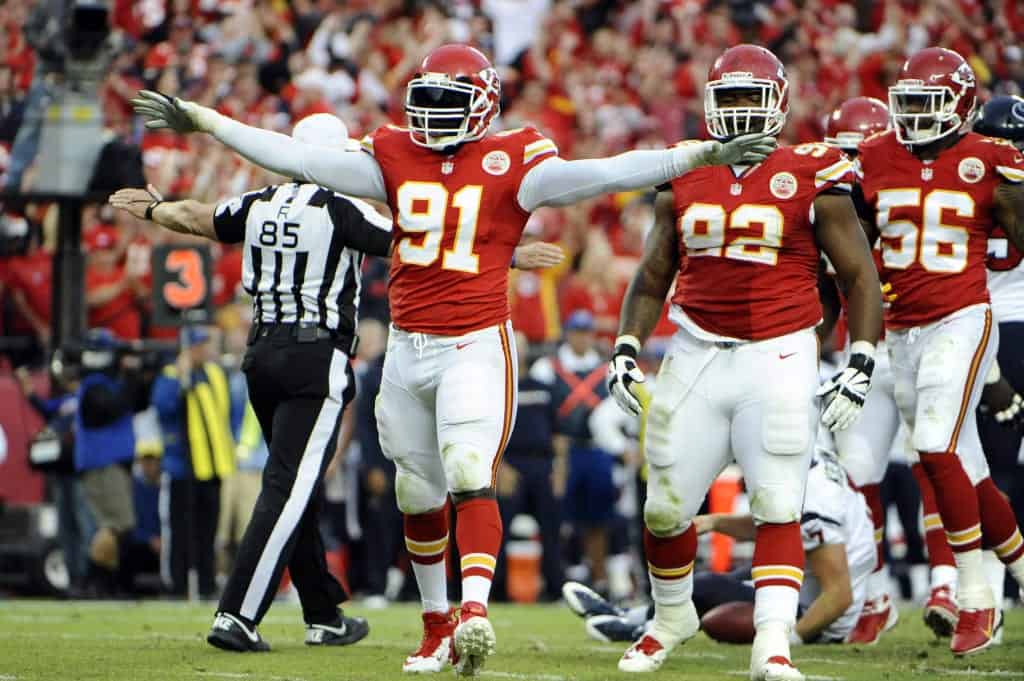 Oct 20, 2013; Kansas City, MO, USA; Kansas City Chiefs outside linebacker Tamba Hali (91) celebrates after sacking Houston Texans quarterback Case Keenum (7) in the second half at Arrowhead Stadium. The Chiefs won 17-16. Mandatory Credit: John Rieger-USA TODAY Sports
What's in this article? Click to show
The Kansas City Chiefs have the reigning NFL Most Valuable Player at quarterback in Patrick Mahomes. They have a dynamic receiving core led by Tyreek Hill and arguably the best tight end in Football, Travis Kelce. However, the Chiefs have plenty of holes on defense. They’ll need to address this if they want to get to the Super Bowl.
Cornerback
Edge Rusher
Running Back

The Kansas City Chiefs have the reigning NFL Most Valuable Player at quarterback in Patrick Mahomes. They have a dynamic receiving core led by Tyreek Hill and arguably the best tight end in Football, Travis Kelce. However, the Chiefs have plenty of holes on defense. They’ll need to address this if they want to get to the Super Bowl.

We know the offense wasn’t the problem in Kansas City last year.  They scored a franchise record 485 points, but on the defensive side they gave up 26.3 points per game. The defense cost them all year. They were 14-2 this year, and both losses were high scoring affairs. Everyone remembers the AFC title game where Tom Brady and the New England Patriots continuously converted on third down to send the Chiefs home from the playoffs.

With the Oakland Raiders a mess, and the Denver Broncos and the Los Angeles Chargers both aging, the AFC West looks to be the Chiefs for the taking for years to come. This offseason, the Chiefs should address three primary positions – cornerback, edge rusher, and running back. Doing so will give them a legitimate chance to not only make the Super Bowl, but to also win it.

The Chiefs are going to lose their two starters from last year. Most will say it’s addition by subtraction, but it is nearly 2,000 snaps. They do return two players in Kendall Fuller and Charvarius Ward that figure to be in the top 3 in 2019. The third CB will have to either come from free agency or the draft. I like free agent corners over drafting a guy because of the rules difference between the college and pro games. One of the biggest stars for the resurgent Cleveland Browns was Denzel Ward who was the fourth pick overall and started from day one.

A player that I would target would be Morris Claiborne formerly of the New York Jets. Claiborne was the sixth overall pick in 2012 draft by the Dallas Cowboys. He has never lived up to his potential as the 6th overall pick, and at the age of 29, he now has the experience to go along with obvious talent to be a great third corner for the Chiefs. A couple of other guys the Chiefs should target in this offseason would be Darqueze Denard from the Cincinnati Bengals and Kareem Jackson from the Houston Texans.

The Chiefs pick 29th overall this year which puts them in a precarious spot. They obviously can draft for need, but the player has to be a guy that can contribute right away. The Chiefs do have 2 second round picks, and that might be a spot where they can find that third cornerback that every NFL team needs. A couple of guys to look at are Julian Love out of Notre Dame, Justin Layne from Michigan State and Kris Boyd from Texas. All three are from big-time programs. Love played on the undefeated Irish team that made the playoffs, and when he went out ion the 2nd quarter, you could see the dropoff.

The Kansas City Chiefs tied for the league lead in sacks. With the news that they are shopping Justin Houston, they will be in the market for a running mate for Dee Ford. A young edge rusher will get single blocked a lot. Ford will command a lot of attention leaving the other side one on one. Edge rushers are a hot commodity in the NFL, and the best place to find them is in the draft.

Picking 29th in this years draft the Chiefs will be able to find a solid pass rusher. One name to watch is Jaylon Ferguson out of Louisiana Tech. Ferguson was uninvited to this years combine in Indianapolis because of some off-field trouble his freshman year in college. He is the all-time sack leader and ranked as one of the top ten edge rushers in the draft. Ferguson would be a steal late in the first round and could prove to be the bookend the Chiefs need.

The Chiefs have been looking for a second running back ever since they cut Kareem Hunt in the middle of the 2018 season. This offseason, the Chiefs gave Damien Williams an extension so he will at least start as the primary RB. Now, they will look for that second running back that all teams need. The draft is a great place to find young backs to help your team. A young player would give the Chiefs someone to groom, while Williams does most of the heavy lifting.

Rounds 3-5 would be an excellent place for the Chiefs to start looking for an RB. A few names that could drop to those rounds are the likes of a Bryce Love out of Stanford. Love was a finalist for the Heisman Trophy after the 2017 campaign. Injuries felled the young man in 2018. If he can return to his 2017 form, he would be a steal in the 3-5th rounds. Another running back from a major power five schools would be Dexter Williams from the University of Notre Dame. Williams suspended the first four games this season then he broke out for the undefeated Irish. He showed speed, power, and an improved ability to catch the football. Another steal in the late rounds.

The Chiefs will be one of the favorites to win the Super Bowl in 2019. Addressing these three needs will go along way in helping them capture their second Super Bowl title.