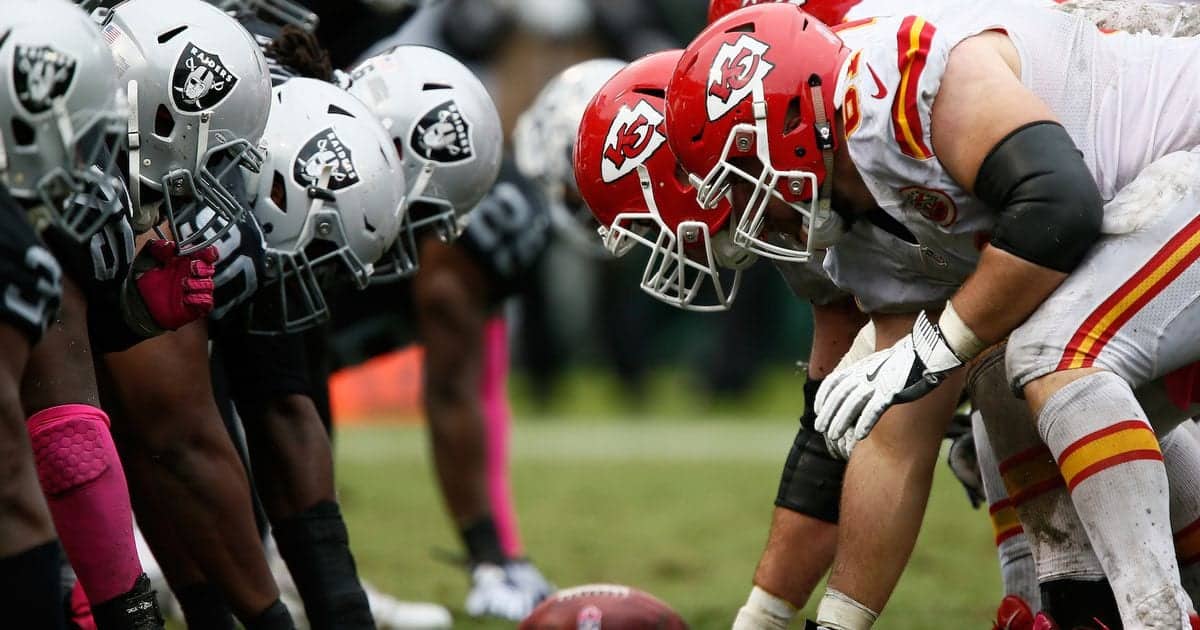 Photo Credit: Getty Images
What's in this article? Click to show
Teams in the National Football League are always changing. After a crazy offseason, can any AFC West team catch the Kansas City Chiefs in 2019?
Quarterback
Wide Receivers:
Tight end
Running back and Offensive line

Teams in the National Football League are always changing. After a crazy offseason, can any AFC West team catch the Kansas City Chiefs in 2019?

For the last three seasons, the Kansas City Chiefs have been the kings of the AFC West. With MVP quarterback Patrick Mahomes under center for the Chiefs, it doesn’t seem like they plan on giving up that title anytime soon.

But every kingdom has a rival looking to overthrow the empire. And while the Los Angeles Chargers came close last season, this year it’s the Oakland Raiders who seem to be aiming for that number one spot.

In this article, we will look at how the team’s offenses stack up against each other for the upcoming 2019 season.

NOTE This is based on how the teams currently stand. A lot of changes will be made with the draft, more free agent signings, and players getting cut, traded, or released.

This one is a no brainer. Kansas City has Mahomes, the reigning MVP, under center while Raiders starting quarterback Derek Carr hasn’t looked the same since he injured his fibula in the 2016 season. While I doubt anyone would argue that Mahomes is clearly the better QB, let’s let the numbers do the talking.

One other stat that I would like to include, though, is the number of sacks each QB took. Mahomes was sacked 26 times while Carr was sacked a whopping 51 times, which was tied for third most. Without digging any deeper into the stats we can clearly see that Mahomes had the better season. He earned his MVP award by becoming only the third player in NFL history with 50 TD, and only the second to have both 50 TD and 5,000 passing yards in the same season.

While that can be attributed to Mahomes being able to scramble and make plays (he had 26 versus Carr’s 8), it is still almost double the sacks.

Advantage: Chiefs because they have the reigning NFL MVP.

This one is going to be a little more tricky to compare but an exciting group to watch once training camp starts.

The Chiefs speedy receiver Tyreek Hill has been getting better every year since he entered the league in 2016 and had a breakout year in 2018.

As for the Raiders, they will be having a new look at WR1 in 2019 with newly acquired ex Pittsburgh Steeler WR Antonio Brown.

While Brown is the more notable name, Hill did better overall in 2018. Let’s dive into some general stats to see how the two compare.

As the stats show us, while Brown had three more receiving touchdowns, Hill was overall more efficient as a wideout in 2018. While I am by no means saying Hill is the better receiver, he has certainly made his case to be one of the NFL’s top threats.

We can take a lot of things into consideration when comparing the stats for these two. Brown having to compete with Steelers WR JuJu Smith-Schuster (who also graded better than Brown) for targets is obviously a factor. But we would also have to consider that he will no longer have Ben Roethlisberger throwing him the ball in 2019.

It’s going to be hard to tell just how good of chemistry Carr and Brown will have. It will also be as equally hard to know if Carr can get the same production from Brown that Roethlisberger did.

After all, Amari Cooper looked like a different receiver with Dak Prescott of the Dallas Cowboys throwing him the ball then he did with Carr in Oakland the very same year.

With Mahomes and Hill playing together now for a second season in Kansas City, it’s safe to say that we know what to expect from the Chiefs’ duo.

Advantage: Chiefs because of the unknown.

I’m not going to go as deep with this one as I did with Brown and Hill but both of these receivers are threats that make the teams better.

As with Brown, the Raiders have a new receiver at the WR2 position in ex Los Angels Charger WR Tyrell Williams, who is coming off a good season.

Williams was targeted 65 times with 41 receptions for 653 passing yards and 5 touchdowns. Williams is a big body receiver who will more than makeup for the loss of WR Jordy Nelson.

For the Chiefs, WR Sammy Watkins has shown flashes but can’t seem to stay healthy. Even though he was only able to play in 10 games, he still was someone you had to game plan for when he was on the field.

Watkins had 55 targets in the 10 games he played that resulted in 40 receptions for 519 passing yards and 3 touchdowns.

Watkins, who was drafted fourth overall in the 2014 draft by the Buffalo Bills, hasn’t been able to live up to expectations. He has only played one full season in 2014 and only has totaled 1,000 receiving yards just once back in 2015. He has never had double-digit touchdowns in a season, either.

If Watkins can stay healthy in Kansas City, he can get that breakout season everyone has been awaiting. But because of his history, I would give the edge here to the Raiders.

This one is a slam dunk, as the Chiefs have Travis Kelce, who was arguably the best tight end in football in 2018. With the Raiders not having Jared Cook on the roster any longer and it being an unknown who will start, its a one-sided affair.

Unless the Raiders can trade for George Kittle, Zach Ertz, or Eric Ebron, the stats aren’t worth comparing.

The draft is certainly an option for Oakland. But even then, it will still be unknown how well they can perform at the professional level.

Kelce had a better season than both Williams and Watkins combined, more yards than Brown, and only 2 fewer touchdowns than Hill!

Kelce is basically a WR1 on most other NFL teams and the real WR2 on the Chiefs roster. Like I said, this one is a slam dunk.

Advantage: Chiefs by a mile.

Running back and Offensive line

These two I will just group together and call it a tie overall, giving each team the advantage in one area a piece.

The Chiefs lost Kareem Hunt and Spencer Ware. The Raiders still don’t know if Marshawn Lynch is coming back but have enough draft picks to get a game changer at RB.

Advantage: Raiders because the Chiefs don’t have Kareem Hunt.

As for the O-Line, I will give this one to the Chiefs because Oakland allowed 51 sacks to Kansas City’s 26. While the Raiders added ex-New England Patriot Trent Brown at left tackle to protect Derek Carr’s blindside, he really isn’t good enough to account for the 25 sack difference. Plus, PFF has him as one of the most overrated free agent signings of 2019.

To summarize, until someone knocks the Chiefs from their throne, we have to give them the advantage, especially on offense. While I do believe the addition of Antonio Brown will make the Raiders better, I just don’t think it’s going to be enough to keep up with the Chiefs and Patrick Mahomes.

The good thing is that all teams in the AFC West seem to be improved and this next season should be a fun one to watch.

With the wild free agency that we have had so far, the league as a whole should be more competitive.

Regardless of who wins the division, the fans are the ones who will win in the end.