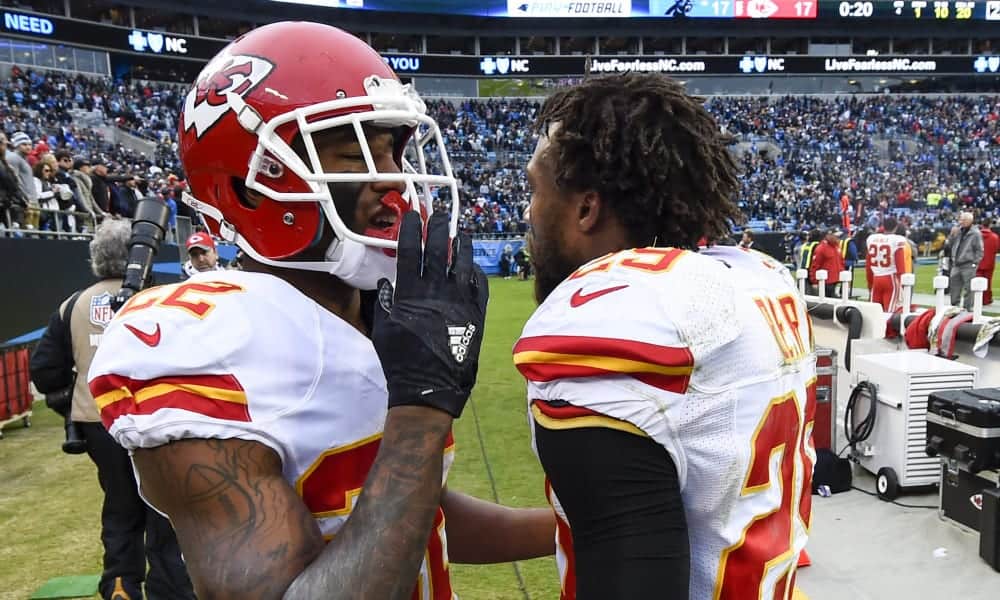 Nov 13, 2016; Charlotte, NC, USA; Kansas City Chiefs cornerback Marcus Peters (22) on the sidelines with strong safety Eric Berry (29) after recovering a fumble with 29 seconds left in the fourth quarter. The Chiefs defeated the Panthers 20-17 at Bank of America Stadium. Mandatory Credit: Bob Donnan-USA TODAY Sports
What's in this article? Click to show
With the 2019 NFL Combine underway, the rumors have started to circulate about players being potentially traded or released. For the Kansas City Chiefs, they are not an exception to that.
What should the Chiefs do with pass-rusher Justin Houston?
The highs and lows for Eric Berry
The setback before the comeback
There are concerns about injuries
Closing Thoughts:

With the 2019 NFL Combine underway, the rumors have started to circulate about players being potentially traded or released. For the Kansas City Chiefs, they are not an exception to that.

Two big stories have begun to come out relating to the Kansas City Chiefs and two of their star defensive players. The first being linebacker Justin Houston with the second being safety Eric Berry. The Chiefs had an excellent 2018 but to get to the next level, there will be decisions that need to be made.

What should the Chiefs do with pass-rusher Justin Houston?

According to NFL Network’s Ian Rapoport, teams have reached out to the Chiefs about a possible trade for their veteran outside linebacker.

Houston, a University of Georgia First-Team All-American and First-Team All-SEC player in 2010, was a Chiefs third-round draft pick in the 2011 NFL Draft. Kansas City initially signed Houston to a four-year, $2.78 million rookie contract which included a signing bonus of $1.04 million.

On March 3, 2015, the Chiefs placed a non-exclusive franchise tag, worth $13.195 million on Houston. The Chiefs, later on, signed Houston to a six-year contract worth $101 million that included $52.5 million in guarantees. Houston would play 11 games in 2015 before injuring his ACL in Week 12 of the regular season. He has never played a full season since the monster 2014 season and only played five games in 2016.

Due to his injury issues and being 30 years old, is he worth the risk of being kept? If Houston stays, a $21.1 million cap hit will incur in 2019. Kansas City can save $14 million by cutting Houston.

The highs and lows for Eric Berry

Berry was sidelined most of the 2018 season due to a lingering heel issue. Now that the season is over, his heel is in the news again, but this time expressing a positive message.

Chiefs head coach Andy Reid told media members at the 2019 NFL Combine and Yahoo Sports’ Terez Paylor later reported via Twitter, that Berry would not be getting offseason surgery as many believed he would.

Berry, who was named a 2x unanimous All-American, 2x First-Team All-SEC, and SEC Defensive Player of the Year in 2008 while playing college at Tennessee, was selected 5th-overall in the 2010 NFL Draft by the Chiefs.

Kansas City signed him to a six-year rookie contract that was worth $60 million, which included $34 million guaranteed. At the time, that contract made him the highest paid safety in the league’s history.

Berry finished his rookie season with a career-high 92 combined tackles, 77 solo tackles (both second best on the team behind Derrick Johnson), nine pass deflections, led the team in interceptions with four, two sacks, a touchdown, and a forced fumble. As an alternate, Berry became the first Chiefs rookie to be selected to the Pro Bowl since Johnson.

The following season would not go as well for Berry who suffered a season-ending ACL injury in Week 1. He would bounce back in the 2012 season being named to the Pro Bowl again, and also in 2013 in which he earned his first of three First-Team All-Pro nominations.

The setback before the comeback

Berry’s 2014 season was one that could only be described as both heartbreaking and shocking. After starting the season strong once again, he suffered a high ankle sprain in Week 2 that sidelined him from Weeks 3-8. After returning, Berry was sidelined for the rest of the season due to chest pains.

On December 8th, 2014, news came out that Berry had been diagnosed with Hodgkin’s Lymphoma. The Chiefs placed him on the none-football illness list ending his season.

To the surprise and amazement of everyone, Berry was declared cancer free and was cleared to resume football activities. Not only did he play in 2015, but it was also like he didn’t miss a beat. Berry finished the season with another Pro Bowl selection, All-Pro nomination, and was named the 2015 NFL Comeback Player of the Year.

In 2016, Berry initially held out before playing under the franchise tag, which was worth $10.8 million. After the season concluded, he earned his fifth Pro Bowl selection and third All-Pro nomination.

The 2016 season was enough to convince the Chiefs he was worthy of a new deal, which Berry signed which was a six-year, $78 million contract. The deal included $40 million guaranteed and a $20 million signing bonus. It also made Berry the highest paid safety in the league once again.

There are concerns about injuries

As of this past season, the 2016 season was the last time Berry played a full season. In the 2017 season opener, Berry suffered yet again another season-ending injury. It was announced the next day that he had ruptured his Achilles and that he would miss the rest of the season.

The 2018 season was a frustrating one for Chiefs fans who were hoping to see Berry hit the field. Berry sustained an injury that caused him to have a sore heel. Every week the media would ask Reid how Berry was, and every week he would answer that he was “day to day.”

Since he got the new contract, Berry has played in three regular season games and two postseason games. During that time, his stat sheet consists of 24 total tackles with 17 being solo tackles. The 2019 cap hit for the Chiefs safety is $16.5 million, but the team could save $9.5 million if they designate him a post-June 1 cut. Keep in mind all of that depends on if Berry passes his physical and is cleared to play.

Unless the team reconstructs one or both of their contracts, It’s unlikely that the Chiefs goes into the 2019 season with both Houston and Berry on the team. If both were to be, they would cost the Chiefs $37.6 million in cap space.

Considering both of their injury histories, a trade or outright cut seems more than likely to be in the future for one or both of Kansas City’s players. I know Chiefs fans have come to love Berry. Furthermore, Houston has proven, as has Berry, that they can both be difference makers if healthy, but that’s the question. Will they be healthy?

The NFL is a business, and the Chiefs have to do what’s best for the future of the franchise. Houston has given his best years to the Chiefs. The team has stuck with Berry through thick and thin, and rightfully so as well. However, it seems the time has come for the Chiefs to decide what to do with them. So no matter what they decide to do, it’s going to make some fans upset.

As a fan, we tend to lean with our hearts. However, an NFL team has to make business decisions regardless of the history the team may have with a player. No matter where Berry and Houston play next season, hopefully, they have a productive and healthy future.

In this article:Eric Berry, Justin Houston