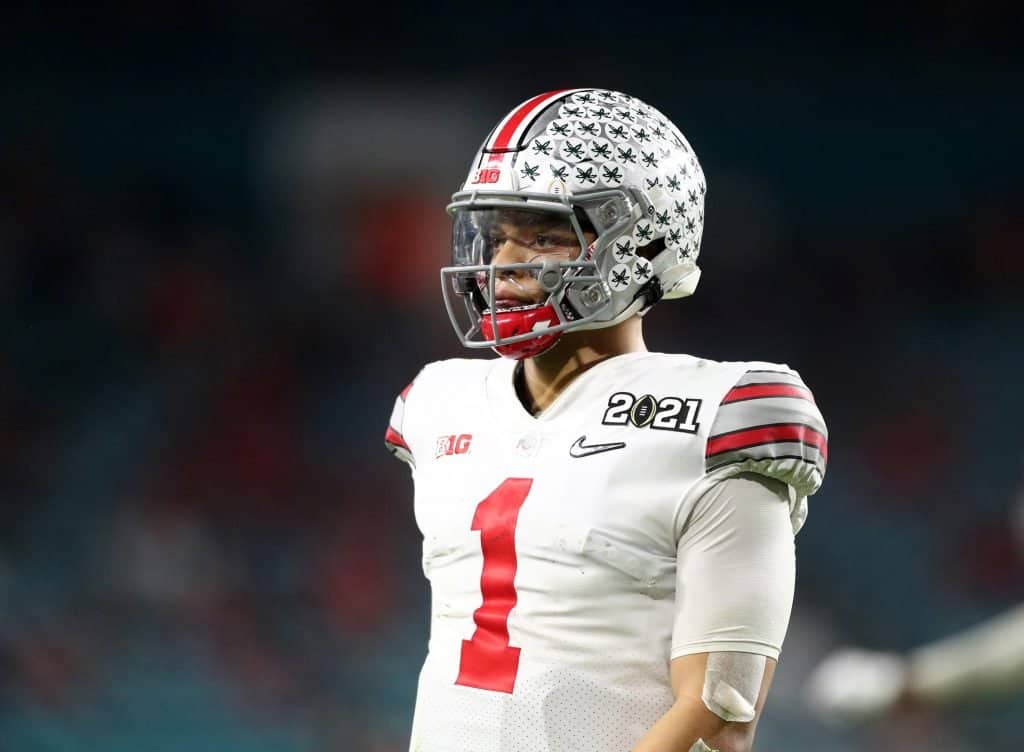 Mandatory Credit: Mark J. Rebilas-USA TODAY Sports
What's in this article? Click to show
Andy Dalton and Nick Foles are difficult to evaluate using conventional methods
Using the OVM to compare Chicago’s veteran QBs
Justin Fields could take the job from both of them
Starting Foles is the best alternative if Fields isn’t ready when the season starts
Want more NFL news and analysis?

The Chicago Bears made one of the biggest moves of the 2021 NFL Draft when they traded up nine spots in the first round to select Ohio State’s star QB Justin Fields. The decision has earned widespread praise from fans and analysts alike. However, it does leave the Bears in a rather unusual position at QB. Fields joins NFL veterans Nick Foles and Andy Dalton on Chicago’s roster. Head coach Matt Nagy remains adamant that Dalton is Chicago’s starter, but the statistics show that he isn’t the best choice.

Before we get to Fields, let’s compare the two QBs currently on the Bears’ roster in Dalton and Foles. Evaluating them based purely on their box score statistics from 2020 is tricky because neither played a full season.

To find out who actually performed better, we’ll need to use more advanced methods.

If we want to properly evaluate the players that Fields will be competing against, let’s turn to the Offensive Value Metric (OVM). The OVM is a grading system created by the (Bx) Movement to evaluate players based on how much value they provided to their offenses, rather than purely on their box scores.

The metric is excellent for evaluating players like Dalton and Foles, who have different sample sizes both from each other and from most NFL quarterbacks.

It might surprise you to learn that Foles performed exceptionally well on this metric. His 2021 OVM grade was 26.55, which ranked ninth in the NFL last season.

Dalton, meanwhile, earned a grade of 23.63. That might not seem like a significant difference, but it was enough to drop his rank to 25th.

Clearly, while their traditional statistics look somewhat similar, Foles was easily the more valuable quarterback of the two. Given how similar their box scores were, the lack of value Dalton provided makes it clear that Chicago’s coaching staff is making a mistake regarding which veteran to start.

Perhaps, after watching him play last season, they simply don’t trust Foles. In that case, Fields might have an easy time taking the starting role from the two veterans. One of them isn’t in the coaching staff’s good graces, and the other simply isn’t playing well.

The advanced metrics behind Dalton and Foles’ OVM grades

It might not be obvious to some why Foles graded so much higher than Dalton. After all, while neither player emerged from last season with winning records, Foles’ was substantially worse. So, let’s dive into the advanced metrics involved in calculating a quarterback’s OVM grade to see if we can find out what is causing the difference.

In the chart below, you can see how Dalton and Foles performed on the following advanced metrics:

As you can see, Foles outperformed Dalton on almost every statistic. The only exception was in their completion percentages, and even there, the difference was barely worth noting.

Foles’ best statistics, and the ones where he outshone Dalton the most, were how often he threw into tight windows and his completion percentage differential. He threw into tightly contested windows on 20.8% of his pass attempts, the fifth-highest percentage among the 41 quarterbacks to qualify for an OVM grade last season.

And while his completion percentage was relatively low, ranking in the bottom half of the league, according to the NFL’s advanced metrics, that number was 1.4% higher than expected. That differential ranked 16th. Dalton, meanwhile, had a nearly identical percentage, but he failed to exceed expectations.

This is yet more evidence that Dalton performed worse than Foles in 2020, but it also opens the door for Fields as a starter. Rookies are often inconsistent, but even if Fields follows that trend, he wouldn’t be any different from what the Bears currently have on their roster.

Justin Fields could take the job from both of them

Despite Foles’ relative success last season, I doubt anyone would be surprised if Fields won the starting job outright before the season starts. Chicago’s front office might lose their jobs if this season goes poorly, and relying on the inconsistent talents of Foles and Dalton may not be good enough.

Fields has the potential to surpass them both almost immediately. He might have been the fourth quarterback selected in the 2021 NFL Draft, but it wasn’t due to a lack of talent. In many ways, it is less a criticism of Fields and more an indicator of how strong the class really was.

Trevor Lawrence, Zach Wilson, and Trey Lance are all excellent prospects in their own rights. Lawrence was the near-consensus No. 1, but there was a great deal of disagreement about the order after him. In fact, many believed that Fields should have been the second quarterback taken.

In short, Fields is a phenomenal prospect who might have gone first in a different year. If Chicago’s coaching staff wants to win right away and save their jobs, he might be their best bet.

If Fields isn’t ready to start right away, as rookie QBs often aren’t, then the Bears will need someone to hold the spot until Fields has acclimated somewhat to the NFL level. Assuming they actually want to win some of those games, Foles is clearly the better choice.

Of course, that still doesn’t solve the problem of Chicago having two veteran backups on the same roster. They could try to trade one of them away, although I don’t know why a team would trade for either player. They certainly won’t give up any significant draft capital to do so.

Ultimately, it’s entirely possible that the QB Chicago chooses as a stopgap might be more determined by who is easier to get rid of rather than who is the better player.

Nevertheless, even if they can’t get rid of Dalton or Foles before the 2021 season starts, the Bears can move on from both QBs after the season if they want. Dalton is on a one-year deal, and they can get out of Foles’ contract at the end of next season.

Assuming Fields lives up to his potential, we might not see much more from either Dalton or Foles in a Bears’ uniform. For now, however, the team might be stuck with them both. Still, if Fields proves to be the QB savior the Bears have been waiting for since Sid Luckman retired in 1950, I doubt anyone will complain about that.