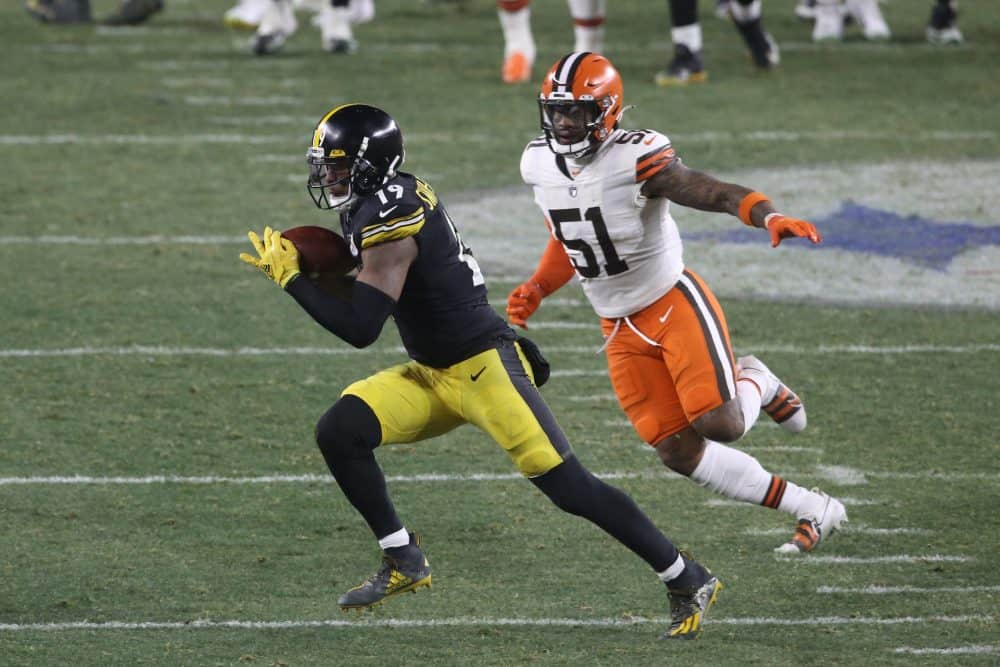 After a slight bounce-back year in the 2020 NFL season, where are the potential landing spots for JuJu Smith-Schuster in free agency? With rumors swirling about the wide receiver market, JuJu Smith-Schuster could make for an interesting test case for how the 2021 free-agent market is shaping up.

After coming out of the gate with two strong seasons, JuJu Smith-Schuster struggled to make an impact in his final two seasons in Pittsburgh. What are the top landing spots for JuJu Smith-Schuster, and what rumors are we hearing about his potential destination in 2021?

It is beyond a rumor that the Pittsburgh Steelers have interest in retaining Smith-Schuster. The Steelers would love to have a player with proven success back in the building.

However, the Steelers are treading a thin tightrope. They already have Diontae Johnson and Chase Claypool in their receiving group. On top of that, the Steelers do not have a huge amount of salary cap space in 2021. They also need to use that cap space to address other needs this offseason.

While there has been little in the way of rumors directly linking JuJu Smith-Schuster to the Dolphins, it is well-known they are looking to draft a receiver. Given his struggles over the past two seasons, Smith-Schuster could come as a cheaper option than Kenny Golladay.

Smith-Schuster is a fascinating potential option for the Dolphins. He has proven in Pittsburgh just how good he can be at times after the catch. Therefore, he could allow Tua Tagovailoa to remain in his comfort zone with throws as he develops, but Smith-Schuster could turn them into big gains. He struggled with that element last season, which could be a possible concern for the Dolphins.

The Eagles could make a lot of sense as a free-agent destination for JuJu Smith-Schuster. It would not require Smith-Schuster to move far from his home in Pittsburgh. Additionally, he could be a nice weapon out of the slot for whoever is under center for the Eagles. Cap space is a major concern for the Eagles regarding this move, but with the wide receiver market starting to shrink, maybe the Eagles can get themselves a deal.

This would be an incredible destination for JuJu Smith-Schuster. The thought of Davante Adams, Smith-Schuster, Aaron Rodgers, and Aaron Jones in one offense is truly terrifying.

Again, the cost would be an issue, but Smith-Schuster fits nicely in Green Bay. He has played in the cold and is also used to playing in less than ideal weather conditions. If they can make the financial part work, this could be a fantastic move for Smith-Schuster and the Packers.

The Washington Football Team really needs to bring in a second wide receiver. They have Terry McLaurin, Logan Thomas, and J.D. McKissic, who make for an intriguing passing game group. Throw in Smith-Schuster, however, and they would be one of the strongest receiving groups in the NFC. Washington is still looking for their long-term answer at QB, but the life of any QB would be significantly easier if they added JuJu Smith-Schuster.

On Thursday Ian Rapoport reported that the New York Jets may be looking to add Juu Smith Schuster, having already added Corey Davis to their roster. Smith-Schuster could play the same role as Jamison Crowder while adding a younger player to the roster. Smith-Schuster would offer a player of a similar level to Crowder, while also being younger and with the Jets having more control over his future.

What is JuJu Smith-Schuster’s potential market value in free agency?

After being selected in the second round of the 2017 NFL Draft, Smith-Schuster spent four years with the Pittsburgh Steelers. In his first two seasons, Smith-Schuster has racked up 2,343 receiving yards and 14 touchdowns.

JuJu Smith-Schuster’s production somewhat fell off after that, however. In his final two seasons, Smith-Schuster had just 1,383 receiving yards and 12 touchdowns. While the touchdowns were still there, his yards per game dropped off significantly.

Spotrac projects Smith-Schuster to be valued around $16.1 million per year on a five-year deal. The total value of the deal projects to be around $81 million. The players that they compare Smith-Schuster to include Amari Cooper, Tyreek Hill, Michael Thomas, and Odell Beckham Jr. Those four players have a salary range of $18-20 million, but Smith-Schuster compares to a slightly worse player to that group on average.