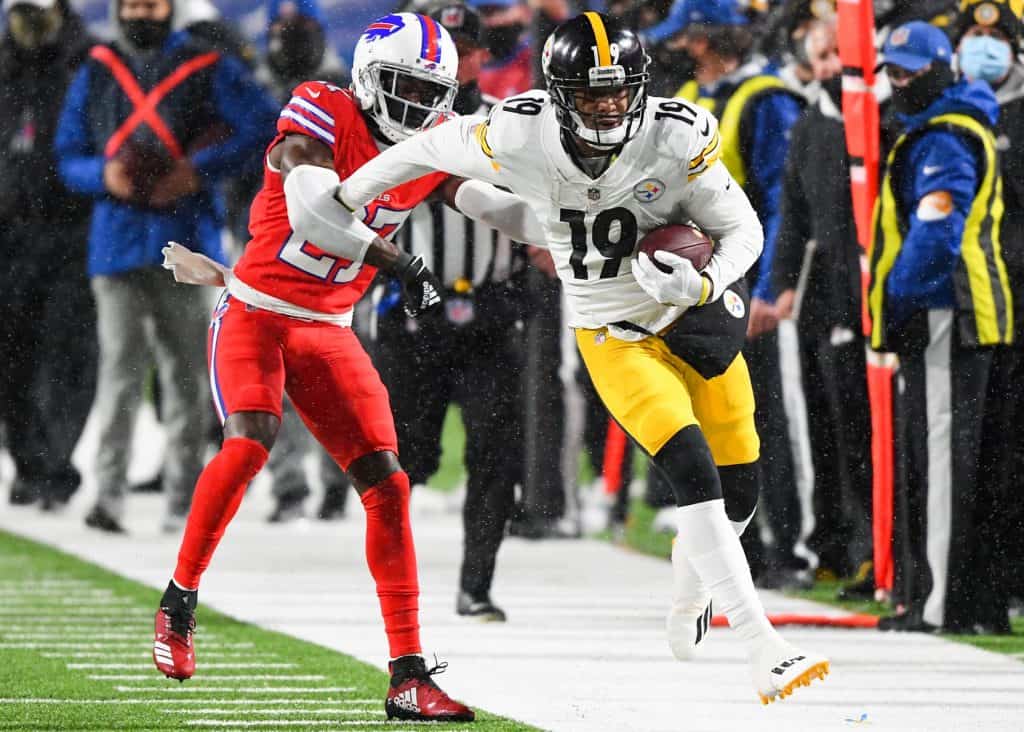 As NFL free agency rumors feverishly swirl, Pittsburgh Steelers WR JuJu Smith-Schuster, one of the class’s most prominent names, remains unsigned. Due to a stagnant market, deflated cap, and possibly inflated self-appraisal, JuJu Smith-Schuster could quickly change his game plan and sign a short-term deal rather than continuing the waiting game.

Update March 19: According to ESPN’s Adam Schefter, JuJu Smith-Schuster has signed a one-year deal with the Pittsburgh Steelers.

Born and raised in California, Smith-Schuster even went to college at USC. Most of his family live in the state, making the Los Angeles Chargers an intriguing landing spot for JuJu Smith-Schuster.

They could pair Smith-Schuster up with an explosive offense led by the 2020 NFL Rookie of the Year in Justin Herbert. Also, there would be no pressure to be the team’s alpha. Keenan Allen holds that role down. Also, we know that Smith-Schuster is all about growing his brand. There is no place better for that to happen than in Los Angeles.

If Derek Carr is going to succeed, he needs someone to throw to in 2021.

So far, the Raiders free agency approach has been…interesting. They got rid of virtually the entire offensive line and brought in Kenyan Drake. However, the moves they have made at receiver have been rather underwhelming. John Brown and Zay Jones do little to move the needle.

While JuJu Smith-Schuster would be more expensive, he fits the Jon Gruden style of football. He could step in and play a physical, aggressive style of football and work the middle of the field with Darren Waller. He also can get vertical and present a dynamic duo with the speedster Henry Ruggs.

The Dolphins are ahead of schedule in their rebuild. Miami almost made the playoffs, and they have two first-round picks in 2021, including Houston’s third overall pick.

The Dolphins believe in Tua Tagovailoa (for now), and the team will have a new offensive coordinator following the resignation of OC Chan Gailey.

Miami needs weapons on the outside. DeVante Parker is okay, but Preston Williams cannot stay healthy and remains a wild card. The team did go out and sign Will Fuller so it is unknown if this takes them out of the running for another wide receiver like JuJu Smith-Schuster, but we know they will be constantly brought up in rumors.

With the third pick, the Dolphins could draft Ja’Marr Chase from LSU and have Smith-Schuster play the slot role while Chase works the perimeter. They would have two stud pass catchers, both under the age of 24, that could be together for another four years.

In 2020, their top receiver was a UDFA from NC State. That says all you need to know about the Patriots skill players coming into this season. Clearly, Bill Belichick knew this as he has acted like the person who was just broken up with and saw their ex doing really well for themselves.

They re-signed Cam Newton, signed Nelson Agholor and Kendrick Bourne at receiver, then added both Hunter Henry and Jonnu Smith because why not? Adding JuJu Smith-Schuster in free agency and pairing him with Cam Newton could help get the Patriots on track in 2021.

Indianapolis needs a WR1, but could WR JuJu Smith-Schuster be it?

As we await a team’s decision on T.Y. Hilton, rumors could pick up about the JuJu Smith-Schuster market. Overall, the Colts have been quiet during free agency outside of the Carson Wentz trade. Adding JuJu Smith-Schuster would be a massive move for a team on the brink of contention.

We know they were thrilled just over a year ago when they drafted Michael Pittman, and they could decide to add another USC Trojan into the fold. While not a team who overpays in free agency, the somewhat dry WR market could make adding JuJu Smith-Schuster more appealing from a financial investment perspective.

Can JuJu Smith-Schuster be a team’s WR1 in free agency?

In the two season’s post-Brown, Smith-Schuster has never been able to recapture his sophomore season’s dominance.

Part of this comes to a lost 2019 season that was led by Mason Rudolph. The Steelers offense was a shell of itself and could not sustain drives. With Ben Roethlisberger “healthy”, things have been better. Smith-Schuster caught 97 of 128 targets for 831 yards and nine touchdowns in 16 games. However, he was second on the team in targets and yards to Diontae Johnson and fifth in yards per reception. Playing mainly as a slot WR on the Steelers offense, he saw a 19.5% target share in 2020.

If he can be a team’s WR1 remains to be seen. However, he will be paid like one, as JuJu Smith-Schuster will likely bring a high price tag in free agency in 2021 if rumors hold true.

What is JuJu Smith-Schuster’s value in free agency?

Here is where things get interesting and not just for JuJu Smith-Schuster but all of these big-name wide receivers. From everything that’s been rumored, the free-agent market has not been, especially those at receiver.

There is every reason to believe that both JuJu Smith-Schuster came into free agency with one price in mind and the money simply is not there. According to Spotrac, JuJu Smith-Schuster carries an estimated market value of $16.1 million on a five-year, $80.727 million deal. However, I don’t see teams wanting to pay this right now. I find it likely that Smth-Schuster will end up dropping both his length and AAV and sign a smaller deal. Then he can attack free agency next year, knowing the new TV deal will skyrocket the NFL’s salary cap higher than $GME after a Reddit post.